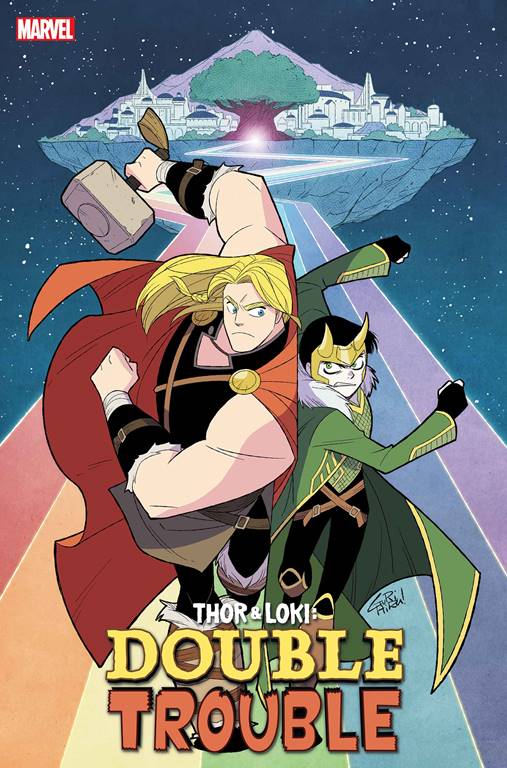 Get ready for a fun adventure starring our favorite Asgardian brothers in Thor & Loki: Double Trouble by Mariko Tamaki (She-Hulk) and Gurihiru (The Unstoppable Wasp). The team was responsible for the popular Spider-Man book, Spider-Man & Venom: Double Trouble, and it looks like this could be the makings of a semi-regular line of books that appeal to younger kids and older readers alike.

I’m a big fan of Tamaki’s work, and Gurihiru’s art is always so unique and adorable. I’m excited to see more from this creative team. Thor & Loki: Double Trouble releases in March 2021! Check out the cover for the first issue and additional details below!

THOR AND LOKI EMBARK ON A LEGENDARY ADVENTURE IN NEW SERIES!

The action kicks off when Loki dares Thor to steal a powerful relic from Odin’s vault. The epic story that follows will be packed with both Asgardian adventure and high-octane action, all illustrated in the iconic vibrant style of Gurihiru.

“Gurihiru are awesome. This comic is so deeply adorable it’s RIDICULOUS,” Tamaki promises. “Very excited to get to write some more adventures with Marvel characters, ESPECIALLY Thor and Loki.”

Loki has always delighted himself in getting the God of Thunder into trouble. But has he finally taken it a trick too far? Don’t miss Thor and Loki’s wildest adventure yet when THOR & LOKI: DOUBLE TROUBLE arrives this March! For more information, visit Marvel.com.