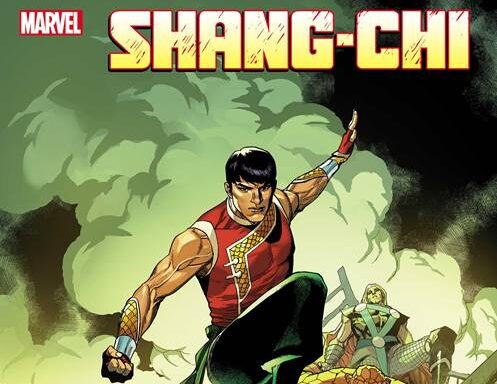 Well, today is a good day. Marvel officially announced that the kick-butt creative team of Gene Luen Yang and Dike Ruan will be returning this May for an ongoing Shang-Chi series. Not another miniseries, but a full blown ongoing!

Yang and Ruan recently finished an excellent five-issue Shang-Chi miniseries, where they completely updated and revamped the 40+ year old character. Now the duo is back in an ongoing, which should allow them to more fully explore all the seeds they planted in those five issues.

In this new series, it sounds like Shang-Chi will have to deal with the growing pains that come with succeeding his father as the new leader of the Five Weapons Society and how the rest of the Marvel Universe perceives him. Given all the new characters Yang and Ruan introduced in the miniseries, pitting them against the larger universe’s heroes is the perfect way to validate and integrate them.

For those interested in learning more about Gene Luen Yang’s approach to Shang-Chi, check out my two-part interview with Yang prior to the release of his miniseries.

You can also read my spoiler free review of issue #1 of the miniseries, which is the perfect place to pick up Shang-Chi if you don’t know much about the character, before this new ongoing series.

Read all the details below!

GENE LUEN YANG AND DIKE RUAN RETURN THIS MAY WITH SHANG-CHI #1!

Shang-Chi VS. The Marvel Universe!

New York, NY— February 16, 2021 — Last year, award-winning writer Gene Luen Yang and rising star artist Dike Ruan transformed the Shang-Chi mythos in a critically-acclaimed new series. And today, Marvel Comics is proud to announce that the incredible team will continue their bold work on the character this May in a new ongoing series. SHANG-CHI #1 will kick off a surprising new journey for Marvel’s greatest fighter as he finds himself on the opposite side of Marvel’s heroes.

After the events of his latest series, Shang-Chi has finally taken his place as the leader of the Five Weapons Society but using an evil secret organization as a force for good won’t be easy. And it’s about to get a lot harder when Shang-Chi’s fellow super heroes from Spider-Man to the X-Men to the Avengers, start to question his motives! Don’t miss what happens when Shang-Chi and his newfound family of warriors collide with the Marvel Universe’s biggest heroes!

“I’m very, very thankful for all the support that we got for the Shang-Chi miniseries. I mean, the first two issues sold out,” Yang said. “I’m thrilled that we get to continue the story of Shang-Chi and his siblings in the Five Weapons Society. We’re going to show how Shang-Chi’s brand-new role affects the rest of the Marvel Universe. We’ll have him interact with old friends and new foes… and even old friends who become new foes. Dike Ruan and I are already hard at work. The stuff I’ve seen from Dike so far has been his best yet.”

Through their expansive world-building in their previous series, Yang and Ruan have successfully modernized Shang-Chi for a new age. Don’t miss the next revolutionary story in his saga when SHANG-CHI #1 hits stands in May. For more information, visit Marvel.com.