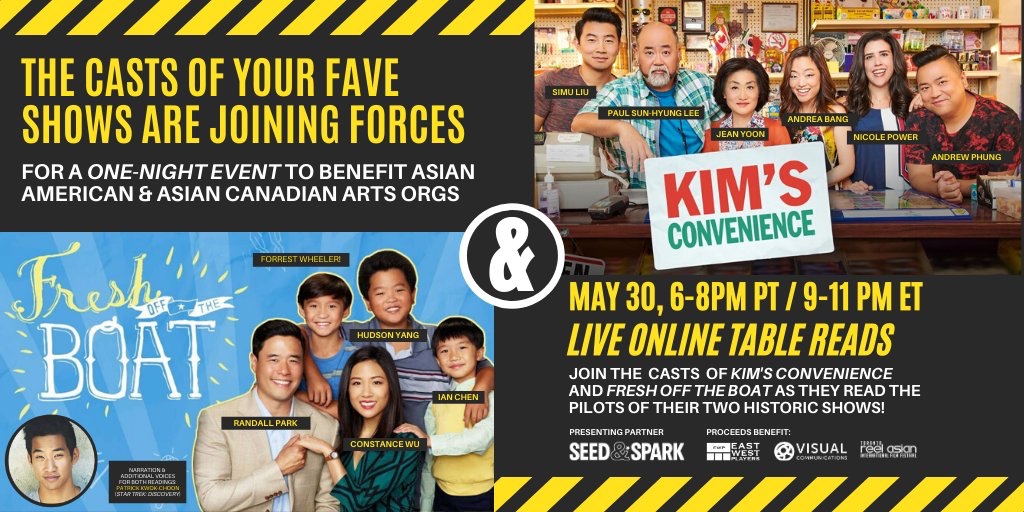 Holy epic team-up Baixi (who gets it?)! The incredible casts of groundbreaking TV shows Kim’s Convenience and Fresh Off the Boat are coming together for a charity table read and Q&A in support of Asian Pacific American arts organizations like East West Players, Visual Communications, Reel Asian and more!

On May 30th at 6 PM PT/9 PM ET, the casts for the two shows will come together for this exciting virtual event where each group will do back-to-back table reads of their respective pilots. Following the table reads, those who donate to support via Seed&Spark will have the opportunity to view a live Q&A with the collective casts. The suggested donation is $10 for this worthy cause, but the project indicates that everyone who donates any amount will be invited to the live Q&A,

This is the perfect closing event for Asian Pacific American Heritage Month! Both Kim’s Convenience and Fresh Off the Boat are groundbreakings shows that feature almost all Asian cast members. Although the two shows are extremely different, and tell the Asian immigrant story from very unique lenses (which is a good thing), they both premiered around the same time (February 2015 for Fresh Off the Boat and October 2016 for Kim’s Convenience) and have felt like spiritual siblings in many ways. Certainly, both shows and their respective cast members, have played huge roles in fighting for greater visibility for Asian artists and projects over the last half decade. It’s great to see them come together at this time to reflect the way the Asian creative community has really come together to support one another in recent years.

Check out the video for the project below and if you’re able, support via Speed&Spark! I just donated today and look forward to seeing everyone on May 30th!

HBO Max is celebrating Asian American and Pacific Islander Month this May with “See Us,” a spotlight page on its streaming service highlighting AAPI...

Happy Kim’s Convenience Season 4 on Netflix Premiere day! Ironically, if you’re in Canada, then today is a bit of a downer since the...

On a regular basis, I’ll highlight some of the work by diverse creators or about diverse characters that are coming soon. This is...