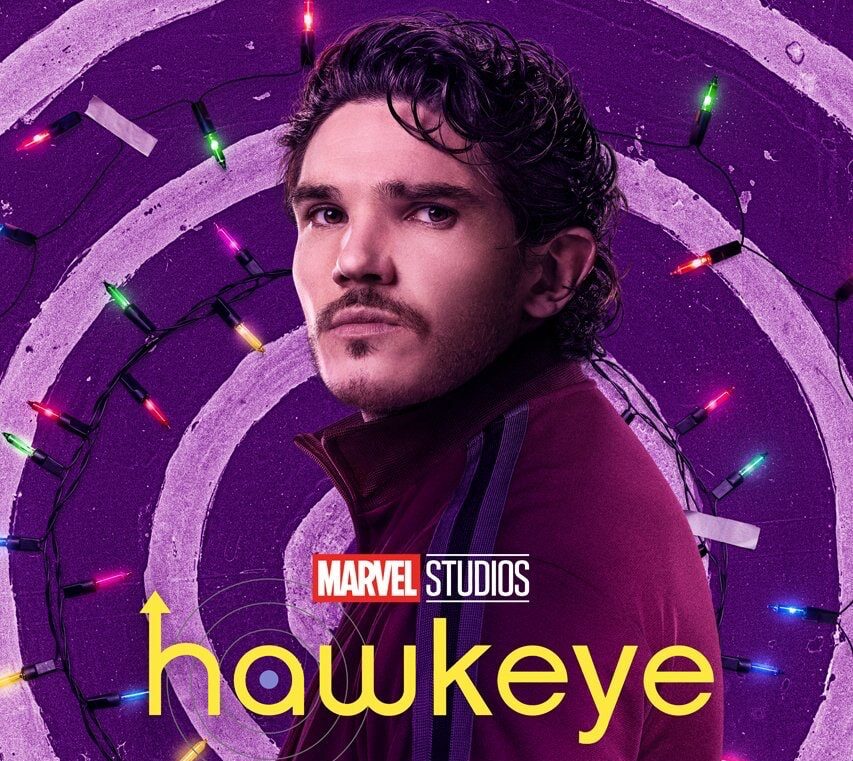 Marvel Studios’ Hawkeye star Fra Fee is as comfortable on stage as he is in front of the camera. Fee starred in the film adaptation of Les Misérables by Tom Hooper and is a veteran theater actor with credits like West Side Story and The Ferryman under his belt. Currently, Fee plays the charmingly villainous Kazi in the Disney+ series Hawkeye, working closely with Alaqua Cox’s Maya Lopez.

I had the opportunity to speak with Fee about learning American Sign Language for the show, his chemistry with Alaqua Cox, and how it feels to get his very own Marvel Studios character poster (he said his ma was going to cover their living room with his posters).

Fee, who didn’t know sign language prior to landing the role, mentioned that at first he was nervous about how much ASL his character needed to know, but was thankful that he had a lot of time to learn and practice. He credited Doug Ridloff, who was the ASL expert for the show, and the interpreters on set for helping him learn the language. Perhaps even more importantly, Fee said that he learned ASL so that he could communicate with Alaqua and develop a comfort working together.

For someone who plays a villain, Fee was one of the warmest and most sincere interview subjects that I’ve had the chance to speak with. In our few minutes chatting, it was clear to see how much he’s relishing this exciting experience and how important it was for him to make sure that his co-stars, like Alaqua, were comfortable working with him.

Marvel Studios’ “Hawkeye” is an original new series set in post-blip New York City where former Avenger Clint Barton aka Hawkeye (Jeremy Renner) has a seemingly simple mission: get back to his family for Christmas. But when a threat from his past shows up, Hawkeye reluctantly teams up with Kate Bishop (Hailee Steinfeld), a 22-year-old skilled archer and his biggest fan, to unravel a criminal conspiracy. The series also features Vera Farmiga, Fra Fee, Tony Dalton, Zahn McClarnon, Brian d’Arcy James and newcomer Alaqua Cox as Maya Lopez. Helmed by Rhys Thomas and directing duo Bert and Bertie, “Hawkeye” debuts exclusively on Disney+ on Nov. 24, 2021.