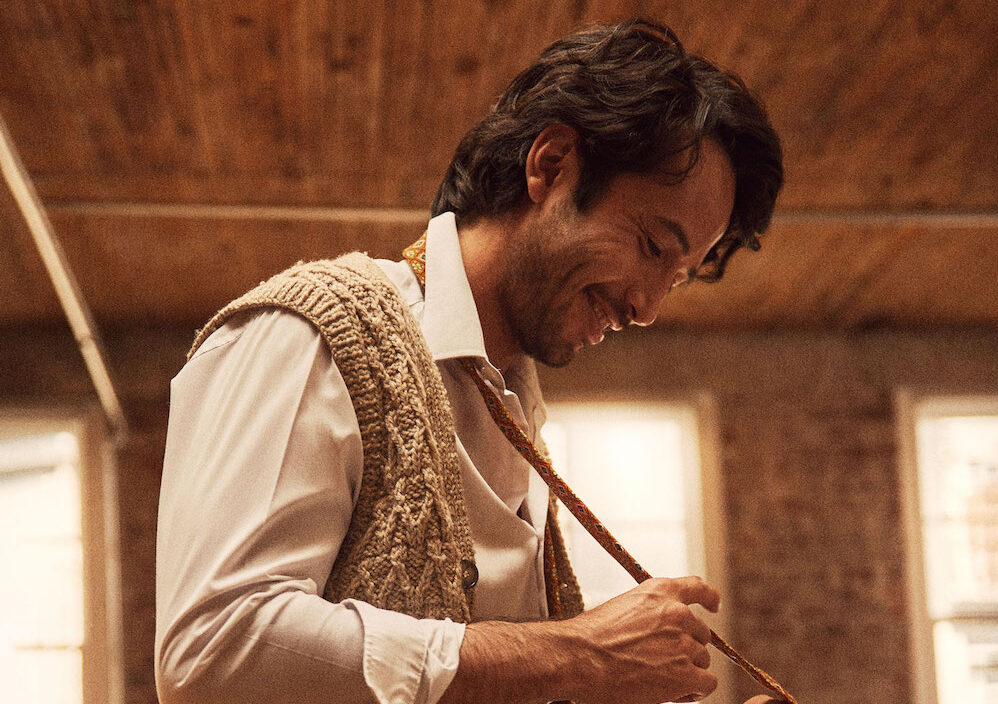 Freeform’s Motherland: Fort Salem star Tony Giroux is a master at moving between various worlds. He’s a mixed-race Chinese actor who was born and raised in France and later moved to Canada. He excelled as a dancer, working with talent like Zendaya, Pitbull and Rihanna and then transitioned into a successful acting career.

Giroux currently stars as Adil in Freeform’s Motherland: Fort Salem, which recently concluded its second season, and has been renewed for a third and final season. I had the opportunity to do an email interview with Giroux prior to the premiere of the show’s second season, and he talked about how dance prepared him for a career in acting, how much he values inclusion and highlighting women’s voices and how he’s navigated the feeling of never quite fitting in.

Watch Giroux in Motherland: Fort Salem currently available on Hulu and look out for the show’s third and final season on Freeform!

POC Culture: You have an extensive background in both dance and acting but I have to ask first, what was it like working with Rihanna?

TONY GIROUX: She is a Queen! With a capital Q, yes indeed. I was young, living in London, and broke when I got news of the gig. This was my first job in London and I was really nervous. Rihanna shows up after a few days of rehearsal and BOOM, all eyes on her. Shades on, killer outfit, slim & sexy, walking with a stank and says, “What’s up guys”. All the dancers looked at one another with a “Holy, it’s Rihanna” look and then tried to go back to work and not stare. She literally chilled throughout the entire rehearsals. On her phone, at one point The Dream showed up, chatting with the choreographer. And I’m wondering, “How the hell is she going to follow the choreography if she isn’t rehearsing with us?” Day of the show, and we haven’t run it once with her. Not once. Music comes on (“We Found Love”), and I hear the roar of the O2 arena in London. The crowd is going wild. And she just turns it on, the x-factor, the magic. I remember dancing right next to her at one point in the song, and there was this huge presence and energy coming from her. Something indescribable and so intense. Left me speechless and I still get goosebumps thinking about it now.

POC Culture: You established yourself as a success in the dance world early on. What made you decide to pursue acting?

TONY GIROUX: Got other people to thank for that! I was so shy. Well, I still am in many ways. And when I moved back from dancing in London, my agent suggested acting. Hmmmm speaking in front of a crowd…no thanks, sounds terrifying. Public speaking has always been a huge fear of mine ever since I was a teenager. Yet I once heard the quote, “Fear is where the soul wants to go,” and I think that always allowed me to lean into it a little. Lean into that discomfort that comes with both anxiety and a ton of thrill. So, I tried it out, little by little, and now I absolutely love it. I realized I was only afraid of myself.

POC Culture: How has your experience in dance helped you to succeed as an actor? What are some similarities and major differences in the two industries?

TONY GIROUX: I try to fit in a shimmy on screen or in between takes and feel like that has hugely contributed to my success as an actor. Just kidding. Dance is an extremely tough industry, in my opinion, and has taught me resilience. Dance auditions are scary. I remember walking into the Rihanna audition. Side note: I’m a slim, 5’11” guy, very reserved. And I walked into the audition room that had a hundred and fifty tall, gorgeous, muscular men. Um…OK. Confidence right now is…non-existent. But you push through, because you never know what could happen, and I want to be able to say I tried.

I think acting also has a similar sense of competition, yet it is much more subtle. You don’t see your competition. You are in the audition room by yourself. In dance, you have to perform in groups of five in front of a panel and fight for their attention. It is ruthless and you gotta earn that spot. In acting, you are given that space and attention for those five minutes in the room. You just got to revel in that.

POC Culture: Motherland: Fort Salem is such a unique concept and that makes it so much fun. What was it about the story overall and the role of Adil specifically that attracted you to the project?

TONY GIROUX: Give me an inclusive narrative, which supports female voices, and has some cool magic, I am in! Eliot Lawrence created a brilliant world with nuanced characters, and that’s what drew me in. Adil specifically tells the story of a young man who’s forced to immigrate, and is faced with a lot of feelings of loss, confusion, and having to assimilate. A lot of parallels with my own life of being an immigrant, and I think that’s what brought the role to me.

POC Culture: How will we see Adil evolve and develop over the course of season 2?

TONY GIROUX: To honor where you’re from or go towards what you want. That’s the battle Adil faces. Something I think we all struggle with at some point. We will see him caught in that inner turmoil, as he is affected by his love Abigail and her ways of thinking. We might also see the Tarim’s own brand of magic.

POC Culture: You grew up in France and then moved to Vancouver, Canada. What kinds of challenges, if any, did you face in both countries as a mixed-race Asian person?

TONY GIROUX: Fitting in. Don’t think I’ve ever felt like I did. Anywhere. I was always caught in between. Not quite white, not quite Chinese, not quite Canadian. But it’s taught me to look at others and myself beyond heritage, appearance, or label.

POC Culture: Our site is based on the idea that representation matters. How important is it for you to represent the Asian community in your roles and what do you hope to communicate through your performances?

TONY GIROUX: Incredibly important for me to represent the Asian community, and the overall message of inclusivity. I was also part of the first holiday movie on Lifetime with an Asian centered cast (Sugar & Spice Holiday), and I remember so clearly watching it with my family, and my brother being able to say, “Oh that is so like grandma”, or “Our aunt does this all the time!” To give people the opportunity to see their culture on screen and in the media, I believe, gives a strong message of inclusion, about where we fit within the whole of society as individuals. Which in turn deeply affects our own sense of identity and belonging. Positive Asian representation is finally coming around, and it is a huge honor and privilege to be part of this movement.

POC Culture: Who were your heroes growing up? Both in pop culture and personally?

TONY GIROUX: My parents! My mom (Chinese) moved to France in the ’80s, not knowing the language, not knowing anyone, and having never been on a plane. Talk about taking a leap into the unknown.

And my dad. He never claimed to be naturally gifted, yet he has impeccable dedication, keeps his head down, and follows his passion. Both my parents were and still are huge inspirations.

In pop culture…Keanu Reeves! It sounds cheesy, but growing up, my two favorite American sports flicks were The Replacements and Hardball. I was fascinated with American culture, and Keanu led me through it.

POC Culture: What’s next for you and what would be your dream project?

TONY GIROUX: Dream project would be to do a Broadway play with Tom Hardy. So, if you’re reading this Tom, I’m just a phone call away.

And I am currently on the finishing touches of a documentary I developed, centering on topics of inclusivity and diversity. Don’t want to say too much yet, but it is something I am very excited about and actively working on. My team and I are looking at distribution and marketing.