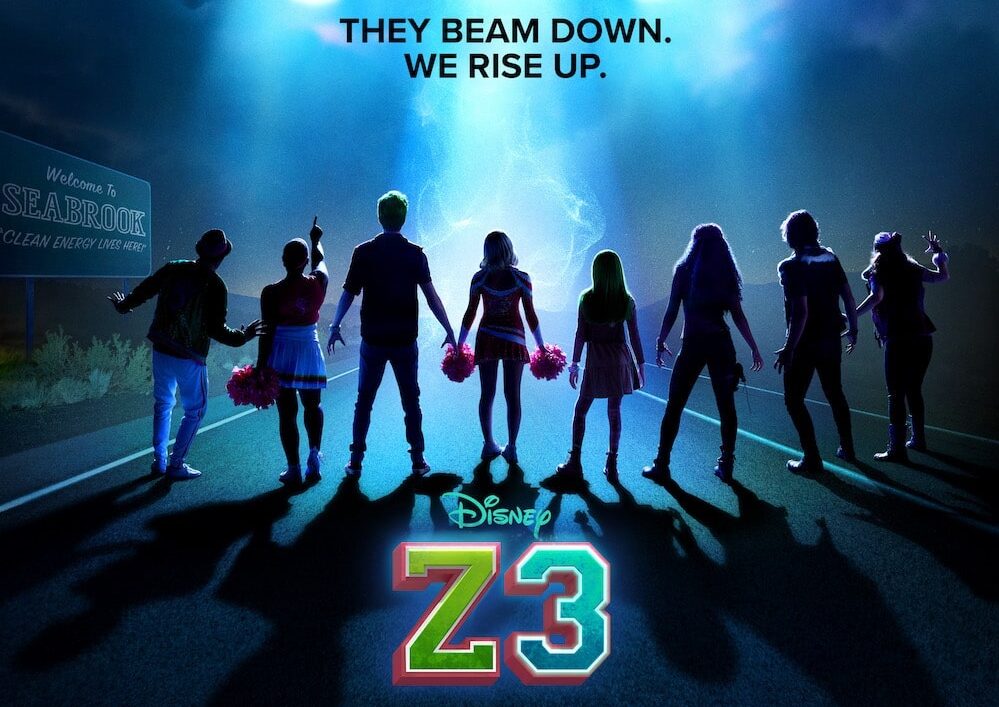 The third and highly anticipated Zombies film finally has a release date! Zombies 3 is set to premiere July 15 exclusively on Disney+, followed by a subsequent release on the Disney Channel on August 12th at 8 PM.

The Zombies franchise, which first debuted in 2018, is one of the Disney Channel’s biggest hits and stars Milo Manheim and Meg Donnelly as high school teens in the fictional town of Seabrook where zombies, werewolves and humans co-exist.

With this third film, the franchise is expanding its boundaries and adding aliens, with RuPaul Charles voicing “The Mothership,” the UFO that brings aliens to Seabrook.

The Zombies films are a bit of a guilty pleasure for me as a franchise that features a wonderfully diverse cast, highlights important issues of class and race, and includes some genuinely fun and excellent music. Especially during the pandemic, the Zombies films have been a very welcome breath of fresh air and source of entertainment for the whole family.

I can’t wait for this third film and will definitely be watching with my family on July 15th (and likely many more times after that)!

Check out Manheim and Donnelly in the announcement video below as well as additional details!

BURBANK, Calif. (May 20, 2022) – Today, Disney+ announced that “ZOMBIES 3,” the much-anticipated third story in Disney Branded Television’s beloved musical franchise, will premiere globally on Friday, July 15 exclusively streaming on Disney+. The trequel, which introduces a new group of mysterious outer space aliens to the diverse student body of zombies, cheerleaders and werewolves at Seabrook High, will make its Disney Channel debut on Friday, August 12 at 8:00 p.m. EDT/PDT with a special encore premiere featuring additional bonus footage and a brand new “lost song” musical number. The multi-talented actor/host/recording artist RuPaul Charles (“RuPaul’s Drag Race”) joins the cast as the voice of “The Mothership,” a comedically passive-aggressive UFO that brings the aliens to earth.

“ZOMBIES 3” stars Milo Manheim as zombie Zed and Meg Donnelly as cheerleader Addison, who are beginning their senior year at Seabrook High in the town that’s become a safe haven for monsters and humans alike. Zed is anticipating an athletic scholarship that will make him the first zombie to attend college, while Addison is gearing up for Seabrook’s first international cheer-off. Then suddenly, extraterrestrial beings arrive in Seabrook, provoking something other than friendly competition. The movie also stars Chandler Kinney as Willa, Ariel Martin as Wynter, Pearce Joza as Wyatt, Carla Jeffery as Bree, Trevor Tordjman as Bucky, Kylee Russell as Eliza, Terry Hu as A-spen, Matt Cornett as A-lan, Kyra Tantao as A-li, James Godfrey as Bonzo and Kingston Foster as Zoey.

RuPaul Charles is the executive producer and host of TV’s global phenomenon “RuPaul’s Drag Race,” for which he has won 11 Emmys, the most awarded to any person of color. In 2017, RuPaul was included in the Time 100 list of the world’s most influential people. A San Diego native, RuPaul became a popular fixture on the New York City nightclub scene. He achieved international fame with the song “Supermodel (You Better Work)” from his 1993 debut album. He has written & recorded 17 studio albums to date. In 1995, he became the first face of MAC Cosmetics, raising millions for the MAC AIDS Fund and becoming the first man to land a major cosmetics campaign. The next year, he landed a TV talk show on VH1. He has appeared in over 50 films and television shows both in and out of drag. He has also published three books.

The movie soundtrack features eight new song and dance numbers that shake things up by leaning into current trends while encompassing an “out-of-this world” sound. The song “Alien Invasion” kicks things off with a sci-fi vibe and electronic track that evokes “Close Encounters,” while new songs for Zed and Addison — including a third rendition of their hit duet “Someday” — reflect how their characters have grown and changed. Meanwhile, the werewolves pursue the Aliens in “Come On Out,” an edgy song with a suspenseful feel. The digital soundtrack from Walt Disney Records will also be available on July 15.

“ZOMBIES 3” brand extensions will include a cross-category product line of apparel, costumes and toys, including a fashion doll line by Hasbro, which will be available as early as June.

DGA Award-winner Paul Hoen, who has directed a record-setting 15 Disney Channel Original Movies (“The Luck of the Irish,” “Jump In,” “Let it Shine,” “Camp Rock 2” and both “ZOMBIES” hits among them), directed “ZOMBIES 3” from a screenplay by David Light and Joseph Raso (nominees for a Humanitas Prize for “ZOMBIES”). Light, Raso and Suzanne Farwell (Disney’s “Upside Down Magic”) are executive producers.

“ZOMBIES 3” is a production of Bloor Street Productions.

Disney Branded Television encompasses the creative storytellers and production and content marketing teams responsible for Disney-branded television series, movies and other programming spanning live-action, animated and unscripted formats. The group fuels the Disney+ streaming platform and Disney Channel, Disney XD and Disney Junior linear networks with content geared toward kids, tweens, teens and families, with stories that are imaginative, aspirational and reflective of their world and experiences. Recent projects include “High School Musical: The Musical: The Series,” “Monsters at Work,” “The Mysterious Benedict Society” and “Marvel’s Spidey and his Amazing Friends.” Disney Branded Television has created some of the most iconic and award-winning properties and franchises, including Peabody Award winners “Doc McStuffins” and “The Owl House”; Emmy Award winners “Big City Greens” and “Elena of Avalor”; the beloved “Mickey Mouse” cartoon shorts plus the Disney Channel Original Movie (DCOM) franchise, comprised of more than 100 titles.

*COPYRIGHT ©2022 Disney Enterprises, Inc. All photography is copyrighted material and is for editorial use only. Images are not to be archived, altered, duplicated, resold, retransmitted or used for any other purposes without written permission of Disney+. Images are distributed to the press in order to publicize current programming. Any other usage must be licensed. Photos posted for Web use must be at the low resolution of 72dpi, no larger than 2×3 in size.

In this article:Disney, Disney Plus, DisneyPlus, Zombies, Zombies 3, Zombies3