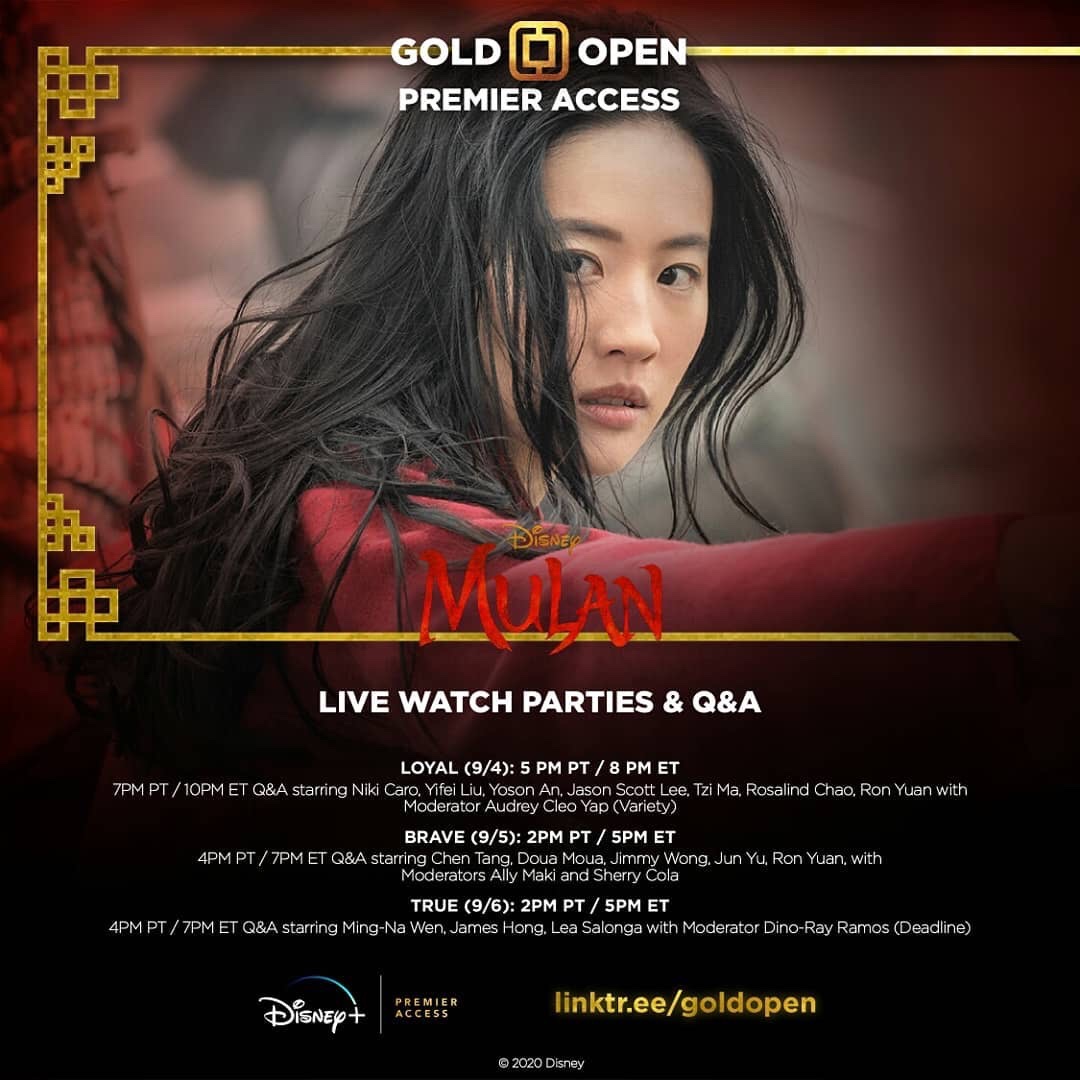 Gold House and The Coalition of Asian Pacifics in Entertainment (CAPE), two organizations that works to lift up Asian and Asian-American creatives and projects in Hollywood, are teaming up to coordinate the latest #GoldOpen initiative in support of Disney’s upcoming feature film Mulan. Inspired by the Black community in Hollywood, the #GoldOpen initiative began in 2017 as the organization sought to bring together Asian and Asian-American communities and coordinate successful opening weekends for Asian centered films.

It makes sense that the first major #GoldOpen push for 2020 would be for Disney’s Mulan, which is set for a groundbreaking premiere on Disney+ next Friday, September 4th. In an effort to help ensure that Mulan will have a successful release, Gold House is organizing a 3-day premiere event, encouraging fans to purchase the film, support Asian restaurants and businesses, and engage with Asian creatives involved with Mulan.

The #GoldOpen events are as follows:

What’s exciting about this #GoldOpen is that Gold House is coordinating support not just for Mulan, but also taking this opportunity to encourage fans to support Asian businesses and products, including a beautifully designed special edition Mulan shirt from Asian-American Girl Club, items from New York’s Pearl River Mart, and local Chinese restaurants. It’s a great holistic approach to this event that hopefully will have a positive impact in multiple areas and bring back the community feel that we’ve all been lacking over the last few months. Gold House has created a convenient page with links to the various ways to participate in the #GoldOpen, so be sure to click the link to review all the options.

Deadline’s Dino-Ray Ramos, who is moderating one of the Q&As, reported that the events will be streamed on the Facebook pages for Gold House and CAPE, and potentially some others as well.

“We miss being together–and know the power communities unlock when they come together. As sheltering-in-place continues, it’s incumbent on us to uncover new methods of producing premium, communal experiences from our homes. What better way to start than with one of the boldest Asian legends, Mulan; a cross-continental cast; and a legion of partners devoted to reimagining the theatre experience while doing good for the community.”

Mulan releases on Disney+ with Premier Access on Friday, September 4th and stars Yifei Liu, Gong Li, Donnie Yen, Jet Li and Jason Scott Lee, and is directed by Niki Caro. A new featurette was recently released for the film which you can find below. See you next Friday!