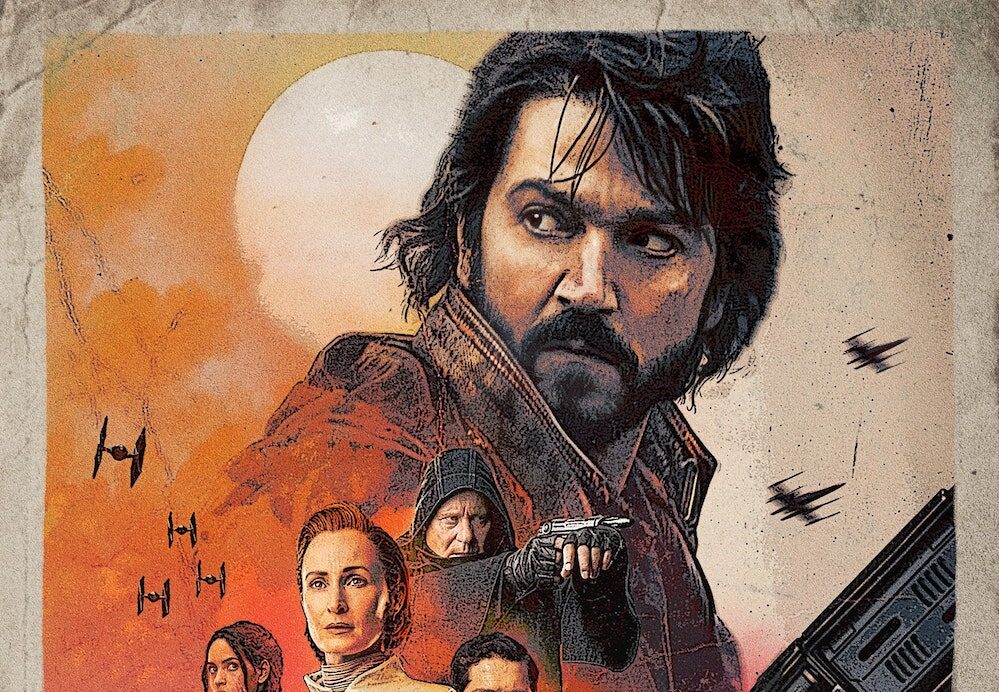 Rogue One: A Star Wars Story is a unique Star Wars film for a variety of reasons. The 2016 film was the first and most successful offering of the spin-off concept that Lucasfilm had conceived of, intended to provide alternative Star Wars films outside of the Skywalker Saga. Fresh off of a wildly successful reboot of the Star Wars franchise with Episode VII: The Force Awakens, the idea was to alternate films by releasing one saga film and one “Star Wars Story”. Things didn’t quite work out as smoothly as everyone hoped, but with $1.056 billion at the box office worldwide, Rogue One was a success by any reasonable measure. It also happens to be one of the most unique and interesting films in the franchise as a whole.

It makes sense then that Lucasfilm would eventually revisit the prequel film even if (spoilers!) all of the main protagonists die at the end (RIP our beloved Guardians of the Whills). Now, almost six years after the release of Rogue One, we are getting a prequel to a prequel in Andor.

Starring the relentlessly charming Diego Luna as Cassian Andor, this series tells the story of how Andor became the jaded rebel fighter we see in Rogue One. With a 12-episode first season and a second 12-episode season already in the works, this series looks to combine with Rogue One to tell its own unique Star Wars trilogy.

This review focuses on the first four episodes of the first season.

The “Andor” series will explore a new perspective from the Star Wars galaxy, focusing on Cassian Andor’s journey to discover the difference he can make. The series brings forward the tale of the burgeoning rebellion against the Empire and how people and planets became involved. It’s an era filled with danger, deception and intrigue where Cassian will embark on the path that is destined to turn him into a rebel hero.

Rogue One was directed by Gareth Edwards with the screenplay by Tony Gilroy and Chris Weitz. Famously, Gilroy was brought in late in the project to help with reshoots and some of the production issues that the film was having. It’s almost surprising given the seemingly tumultuous background of Rogue One that Lucasfilm tapped Gilroy again and that Gilroy even agreed to return to the Galaxy Far Far Away. Gilroy has admitted that he was never much of a Star Wars fan, and even stated that he didn’t view Rogue One as a Star Wars film. It’s perhaps that lack of reverence that makes him such a perfect candidate to tell the stories in this unique corner of the Star Wars universe.

Like Rogue One, Andor is a Star Wars story that almost doesn’t seem like Star Wars. There are no space wizards, no lightsabers and certainly no grandiose villains (yet). The Force is nowhere to be seen or felt and neither are its users of any kind. Instead we meet a younger Cassian Andor and the community that formed him, like Maarva Andor (Fiona Shaw), Bix Caleen (Adria Arjona) and Luthen Rael (Stellan Skarsgård). That world also happens to intersect in unexpected ways with Senator Mon Mothma (Genevieve O’Reilly), who fans know will go on to lead the Rebel Alliance.

Andor is more of an compelling spy drama than a swashbuckling space adventure. This isn’t the Star Wars that was inspired by the likes of Buck Rogers or Flash Gordon. Luna of course leads the cast with charisma and a relatability that make him the perfect lead for an extended series. Unlike superhuman Force users who have been all over this universe since the Prequel Trilogy, Cassian really is as much of an “every man” as a Star Wars character can be. Luna embodies the kind of character who viewers can connect with and root for.

The cast around him in Andor is nearly as strong as it was in Rogue One (which boasts one of the very best ensemble casts ever). Fiona Shaw’s Maarva is a mother figure who clearly inspires Andor’s rebellious fight for justice and Adria Arjona’s Bix is a smart and well-connected ally who knows how to get things done. The standout in the first four episodes however is Stellan Skarsgård’s Luthen who really can’t be properly summarized but will clearly play an integral role in not just the life of Cassian, but to the formation of the Rebel Alliance.

Luthen has a unique intensity that forces the camera and audience eyes to focus on him in every scene. He commands respect and Skarsgård plays the role so perfectly while also hinting at far more complex layers within the character that have yet to be revealed.

This series also looks to at long last give depth and backstory to one of the most revered characters in the Star Wars saga, Mon Mothma. First played by Caroline Blakiston in the Original Trilogy, Genevieve O’Reilly has filled the role since Episode III: Revenge of the Sith in 2005. It’s only taken 17 years, but O’Reilly finally gets a chance to show audiences who Mon Mothma really is beyond the stoic leader we’ve seen thus far.

Prequel stories are often challenging to tell because the fate of the main characters are already known. The question then remains – what does this prequel story add to the existing story that needs to be told? With Andor, the roles that Cassian, Luthen and Mon Mothma play in turning brewing rebellious sentiment into an organized, galaxy-wide rebellion is a story that seems worth watching.

Beyond the story, Andor looks the absolute best of any Star Wars series we’ve seen thus far on Disney+. While other shows have fallen short of the cinematic visuals that fans have become accustomed to in Star Wars, Andor has no such issues. The sets, the visual effects, the costumes are all gorgeous. Frankly, after Boba Fett, where many of the set pieces took me out of the story, it was a relief to see the impressive quality that clearly went into Andor.

As mentioned above, Andor doesn’t have many of the hallmark elements of Star Wars. The first three episodes in particular focus on Cassian and the local events that eventually lead him on his path to become the character we see in Rogue One. However, the spark that sets those events in motion is rather mundane by science fiction/fantasy standards. The first three episodes feel small and if audiences weren’t already invested in Cassian as a character in Rogue One, the story itself may not be quite compelling enough to keep their attention.

It was a smart decision by Lucasfilm to release the first three episodes at once. The three episodes, roughly ninety-minutes together, form more of a introductory film to the series than a true pilot and subsequent episodes. The fourth episode however pays off the first three in a very satisfying way and that’s where the hook is.

In some ways, the structure of the first three episodes of Andor is similar to that of Marvel Studios’ WandaVision, but without the uniqueness of storytelling that the MCU series offered. The episodes set the stage with a deliberate and methodical pace that places unusual faith in the audience’s willingness to keep going.

It’s worth questioning too what makes Andor a Star Wars story when it doesn’t have so many of the franchise’s trademarks. Will broader audiences be interested enough in a story that doesn’t have Jedi, Sith and lightsabers? This series might provide an interesting test case as to what exactly “Star Wars” is and how broadly stories can be told away from the main saga.

Andor star Diego Luna was raised in Mexico City, as was his co-star Adria Arjona, making this series the first Star Wars film or series two feature two Latinx leads. Rogue One of course is one of the most diverse Star Wars films ever (all those wonderful accents!). Unfortunately, as strong as the cast is overall, the diversity in front of, and behind, the camera in this series is lacking beyond Luna and Arjona. Particularly following shows like The Mandalorian, which regularly highlights directors of color helming the episodes, and Obi-Wan Kenobi, where Deborah Chow directed each episode and served as the showrunner, it’s disappointing that Andor doesn’t have more diverse creatives involved. One can only hope that with twelve more episodes coming in the second season, there will be substantial improvements in this area.