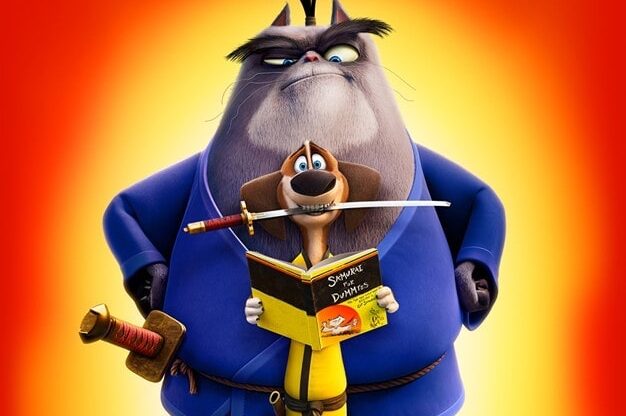 The new trailer for Paramount’s upcoming animated film Paws of Fury: The Legend of Hank was released today, starring Michael Cera as a dog living in a city full of cats who turns to a samurai cat (Samuel L. Jackson) to mentor and train him.

It’s a potentially fun furry twist on the well known martial arts story, with a diverse cast that also features George Takei, Michelle Yeoh, Gabriel Iglesias, Aasif Mandvi, Djimon Hounsou, Kylie Kuioka, and Cathy Shim. The trailer is as as light and fun as you would expect from the cast, and I enjoy the idea of Jackson as the samurai mentor adding some welcome irreverence to the film.

The film will inevitably draw comparisons to Jack Black’s Kung Fu Panda, which Paramount distributed. Michelle Yeoh also made a voice appearance in the sequel film of that series, and it’s always great to see the martial arts legend continue to get more projects in Hollywood.

I appreciate the effort to add more diversity in the main voice cast, especially for a film that focuses on Japanese martial arts and aesthetics. However, I would have much preferred the primary roles be given to Japanese or other Asian voice actors. Hollywood loves martial arts stories and it’s long past time that those stories highlight Asian talent front and center.

For this film, I hope that the Asian and other diverse voice actors that are part of this project are given significant roles and that the story is fun and respectful of the culture.

Paws of Fury: The Legend of Hank premieres July 15th!

A hard-on-his-luck hound Hank (Michael Cera) finds himself in a town full of cats who need a hero to defend them from a ruthless villain’s (Ricky Gervais) evil plot to wipe their village off the map.  With help from a reluctant teacher (Samuel L. Jackson) to train him, our underdog must assume the role of town samurai and team up with the villagers to save the day. The only problem… cats hate dogs! Also starring Mel Brooks, George Takei, Aasif Mandvi, Gabriel Iglesias, Djimon Hounsou, Michelle Yeoh, Kylie Kuioka, and Cathy Shim, PAWS OF FURY: THE LEGEND OF HANK pounces into theatres July 15, 2022.

In this article:Paramount, Paws of Fury