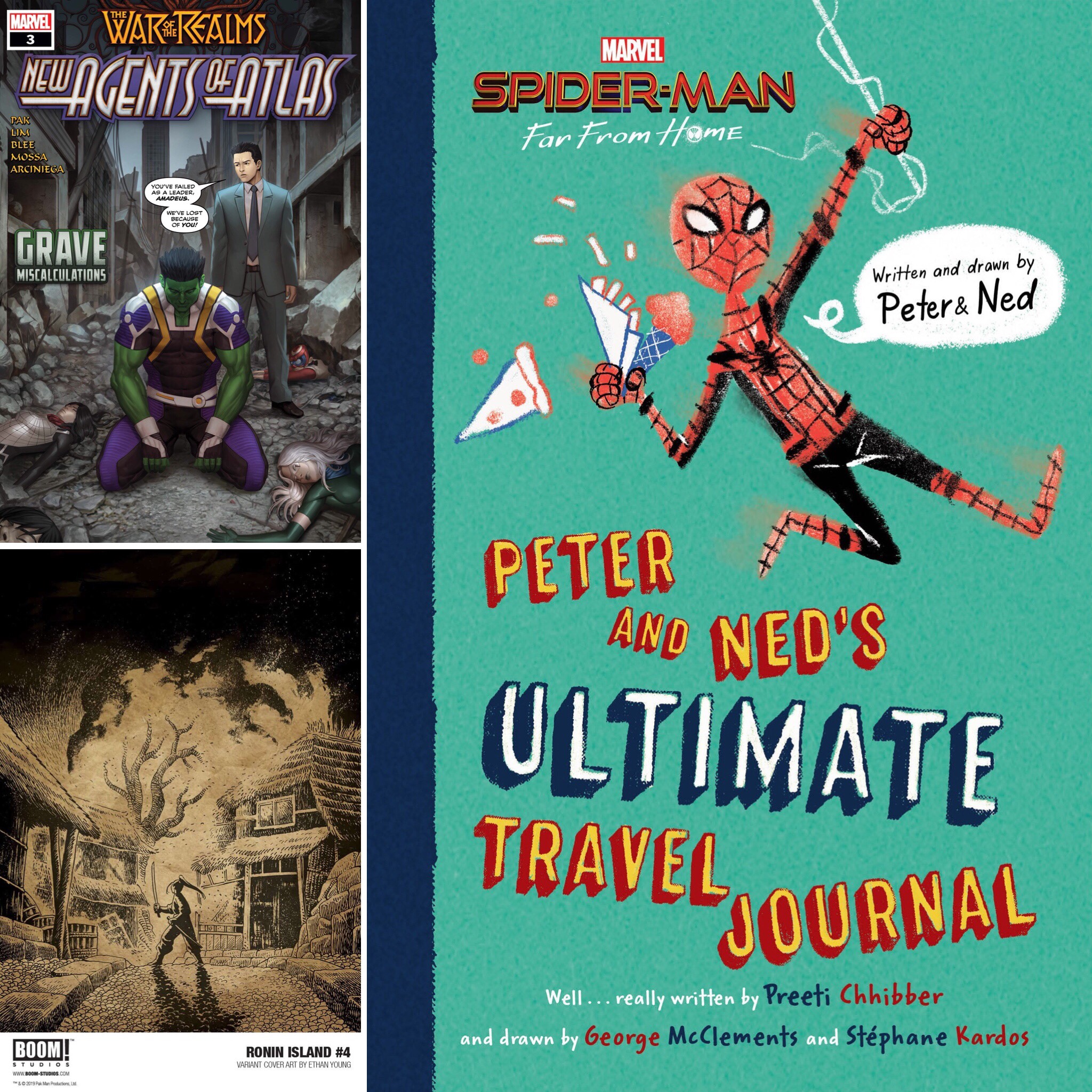 This fun in universe tie-in book from Preeti Chhibber released yesterday. For those of you who don’t know, Chhibber is a huge Spiderman fan and this book is a dream project for her. In a great interview with SyFy Wire, Chhibber explained that she relates so much to Peter Parker because “Peter is allowed to have feelings, and have those feelings quite intensely. It’s a nice reminder that being strong doesn’t mean being stoic, or unfeeling. The character is fueled by hope, and love, and rage, and frustration.” This book seems like a fun way for kids (of all ages) to get excited for Spider-man: Far From Home next month!

Peter Parker’s off to Europe with his classmates from school! How does Spider-Man stay one step ahead of the bad guys while on the road, while keeping his identity a secret? You can find that out—and a whole lot more—in this book filled with epic writings from Peter and his best friend Ned. With the help of MJ, Peter and Ned have jotted down all the exciting things they saw while traveling through Europe: favorite foods, photo ops, Spidey-secrets, and more. This ultimate travel journal has it all!

Well that’s an ominous cover! In promoting this book a few months ago, writer Greg Pak mentioned on Twitter that the leader of this team would be Amadeus Cho, but teased that how the leadership plays out was a bit of a spoiler. Those who read the previous iteration of the Agents of Atlas (and if you haven’t, you really should because they were great) know that Jimmy Woo was their leader and his leadership was the character’s primary quality. Given those two things, this cover is pretty interesting. Also, going by the preview panels that Marvel shared previously, this comic is a must-read based on the fact that Shang-Chi looks to use Bruce Lee’s famous one-inch punch.

BURN, BABY, BURN! AMADEUS CHO has always been the cocky rebel, bucking authority to do the right thing. But now he’s the authority — the de facto leader of a disparate group of heroes from all over the Pacific — each of whom has their own idea of the best way to free their countries from the fiery rule of the QUEEN OF CINDERS! Can Amadeus pull these NEW AGENTS OF ATLAS together — or will QUEEN SINDR succeed in her ultimate plan to drive north and turn all of Earth into NEW MUSPELHEIM?

Greg Pak’s pan-Asian (notice a theme?) fantasy comic for Boom! Studios was originally a 5-issue mini-series. However, due to popular demand, the comic was given a full 12-issue series order.  This is great because I can’t imagine this story being wrapped up in just one more issue. I’m pretty sure this issue is going to make me emotional. All the art has been great, but the variant covers by Ethan Young have been masterpieces!

When Hana and Kenichi come face-to-face at last with the great and mighty Shogun in his palace, Kenichi finds himself embraced and gifted a full set of golden armor while Hana is relegated to the servants’ corridors. But both of the islanders have a hidden agenda to find out exactly what the Shogun and his forces are up to in their enormous stronghold. What they discover will change everything they’ve ever known and end in someone making the ultimate sacrifice to save the lives of their people.

That’s it for this week! As always (and this hasn’t even happened ONCE yet), tweet me and let me know what comics or books you’re excited about!

In this article:Agents of Atlas, Greg Pak, Ronin Island, Spiderman

Welcome to W.E.B. of Spider-Man issue one! W.E.B. is one of many teams and facilities being set up by the Avengers to inspire new...

In this issue, which is a calm before the “Clone Saga” storm, Miles Morales starts a new journal. It’s been a while since Miles...

Miles Morales is getting a “Clone Saga” of his own! Starting this April, with Miles Morales: Spider-Man #25, Saladin Ahmed and Marvel’s Stormbreaker artist...