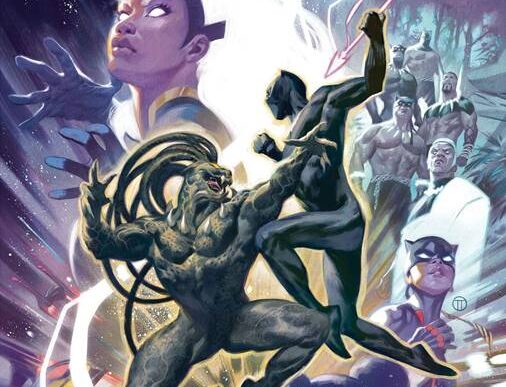 One of the most unique Black Panther comic runs returns in February 2021 with Black Panther #23 by acclaimed writer Ta-Nehisi Coates. One of the casualties of COVID, Coates’ epic Black Panther series, which takes place largely in space, last released in March with issue #22. It will be nearly a year by the time the series returns.

I’ve thoroughly enjoyed this unique take on the Black Panther mythos, taking the kingdom we know so well in comics and adding an afro-futuristic space element. It’s almost like a mix between Star Wars and Marvel, with Coates’ trademark social commentary mixed in. The series was really picking up before the hiatus and I’m definitely excited to see it return.

Check out the stunning variant cover of Black Panther #23 by Julian Totino Tedesco below, as well as additional details! Wakanda Forever!

The acclaimed saga continues in February!

Since taking over as writer in 2016, the acclaimed author has taken Black Panther and Wakanda to the stars and beyond. Across the multiverse, T’Challa discovered an alternate Wakanda, one ruled far differently than his own. Having abandoned their once peaceful ways, this Intergalactic Empire of Wakanda will stop at nothing to rule all of the cosmos. After initially being enslaved by the empire and then joining a rebellion against it, T’Challa has finally made his way back to Earth, but this twisted reflection of Wakanda is not far behind…

With issue #23, Ta-Nehisi Coates’ contribution to the Black Panther mythology begins its startling conclusion, expanding the legend of Black Panther like never before. Throughout this bold saga, Coates’ landmark era has introduced exciting new characters, redefined favorites such as Shuri, rekindled the King of Wakanda’s romance with Storm, and resurrected one of Black Panther’s greatest foes, Erik Killmonger.

“We’re so excited to bring BLACK PANTHER back to the stands, and we thank all our readers for their patience,” said editor Wil Moss. “I promise, these last three issues will be worth the wait — Ta-Nehisi and Daniel have been building to this finale for over two years now, and the ensuing battle between the forces of T’Challa’s Wakanda and Emperor N’Jadaka’s Intergalactic Empire is going to knock your socks off! Just wait’ll you see who shows up to help defend Wakanda…”

Don’t miss the kickoff of the final chapter in a monumental run in comic history! Check out the variant cover by Julian Totino Tedesco below, head over to Marvel.com for an exclusive preview, and be sure to pick up BLACK PANTHER #23 when it debuts in February.