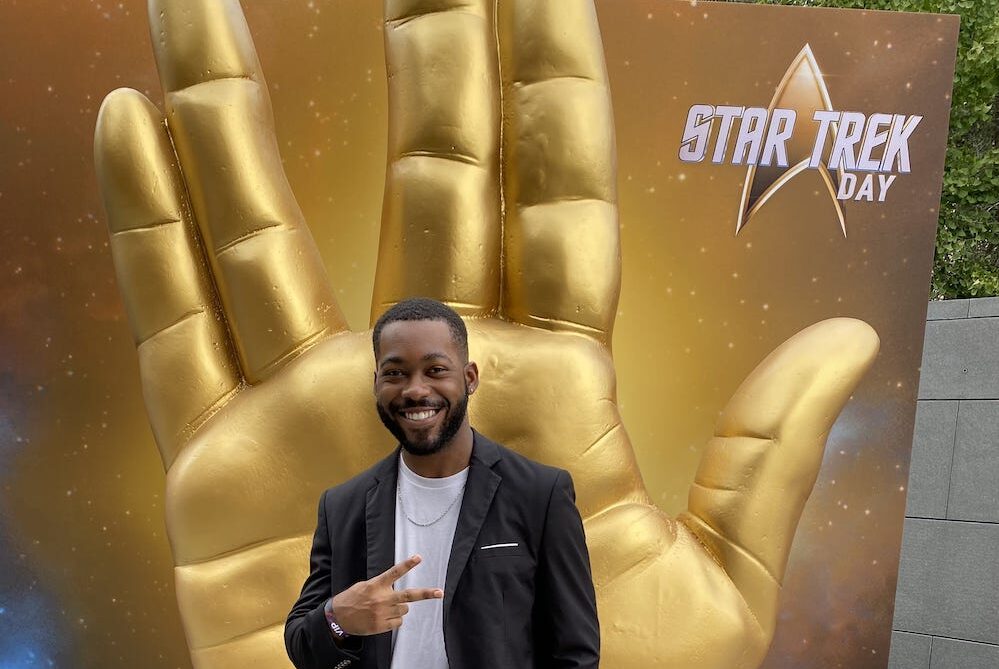 Star Trek is one of those rare enduring franchises—arguably the first of its kind—that can be passed from generation to generation: its message resonates with the young and old, and due to its fantastical and ever-expanding nature, can be reinterpreted and re-imagined for decades to come. It has cemented itself in pop culture and the heart of fans so deeply that not only can you find countless references to Star Trek in everyday life, but it also has its own designated day (September 8th, for the uninitiated) for “Trekkies” and science fiction lovers in general to unite in celebration. I had the opportunity to join the festivities this year at a special event hosted by Paramount+ in Los Angeles to celebrate all things Trek.

Speaking of the uninitiated, it only feels fair to confess that, between the two prominent “Star” franchises, I was always a Star Wars guy. Prior to attending this year’s outstanding Star Trek Day celebration, I only knew of Star Trek vicariously through friends and fellow nerds and had an entry-level knowledge of Spock, Captain Kirk, the importance of Nichelle Nichols and Patrick Stewart’s “Engage.” I’d never seen an episode of Star Trek in 27 years of living.

The day started with tangible excitement as the lobbies filled with all sorts of casual and hardcore fans alike; it was fun seeing the cosplayers of all skill levels mingling with the occasional incognito celebrity, as they traded jokes, shared the snack bar, grabbed customized merch and discussed all things Trek related. It was a great testament to the breadth of diversity the franchise continues to attract. I had my face painted with Borg “cybernetics,” got an engraved thermos and partook in trying out some delightful, sci-fi treats from Supercool Creamery (which gave me momentary “dragon’s breath” super powers —thanks, science!)

All roads led to the main event itself: the Star Trek Day Live Stage Show in the Guerin Pavilion. The presentation started with some fun and touching red carpet interviews with Star Trek actors past and present, as well as behind-the-scenes series contributors. There was some serendipity that evening as I was sat behind a life-long Trekkie, my new friend Kota, who walked me through the who’s who, as it played out. As an outsider to the fandom, there’s a really strong and welcoming sense of family in the Star Trek community; you could feel it walking through the rooms and talking to the fans. No one ever made me feel out of place for being the novice in the room—instead, they were excited to recommend places to jump in and series to get started with.

And finally the big reveals began: hosted by Star Trek: Lower Decks‘ own Tawny Newsome and Paul F. Tompkins, all the goods got rolled out with teasers, trailers and lively Q&As. A new look at the upcoming Season 3 of Picard brought the great Patrick Stewart, Jeri Ryan and Michelle Hurd on stage to announce the crew’s return to space. Fans got a substantial peek at fresh scenes from Strange New Worlds featuring fan-favorites Lt. Erica Ortegas (Melissa Navia) and Capt. Christopher Pike (Anson Mount) discussing who helms their next daring flight mission. Following the live action segments was a panel with Star Trek: Prodigy’s Kate Mulgrew and Brett Gray, which showcased some cool scenes and familiar faces appearing in the upcoming episodes.

In between all the previews were wildly entertaining bits from the event’s MC, Reggie Watt, and select members of the cast and crew of the Star Trek series. One segment featured a lucky Trek cosplayer getting pulled onstage (and then backstage) to get the full Klingon prosthetic treatment, which was unveiled at the end of the show. The Ready Room’s Wil Wheaton took to the stage to revisit moments near and dear to the community and Wrath of Khan writer Nicholas Meyer made a brief but heartwarming appearance to thank the fans and also hint at upcoming adventures in the Star Trek universe.

The night was marked with celebration and also remembrance for one of Star Trek’s most integral members: the late, great Nichelle Nichols. Led by Newsome and Tompkins and eloquently wrapped by current “Nyota Uhrara” actress Celia Rose Gooding, there was a moment of silence in Nichols’ honor, followed by a montage of achievements highlighting the indelible mark Nichols left on cinema and American culture as a whole. From being the first black actress in a long running science fiction show in a leading role, to being Col. Frederick D. Gregory’s main influence in becoming one of the first African American astronauts, Nichols inspired a new generation of women and people of color to enter the writers rooms and to get behind and stay in front of the cameras for good.

Nichols’ philanthropy was also echoed by Paramount, who started the #StarTrekGives campaign the day of the event to match donations to worthy and related causes and charities when people would post photos and videos of the festivities and use the tag on social media.

From the series stalwarts and mainstays to the people who’ve commandeered the stories and even costume designs, sound effects and makeup for decades, it’s not hard to understand why Star Trek has endured as long as it has. It’s a grand and all-encompassing story about people who care for people, created by people who care about people—no matter how young or old, or what religion or creed, race or ethnicity they may be.