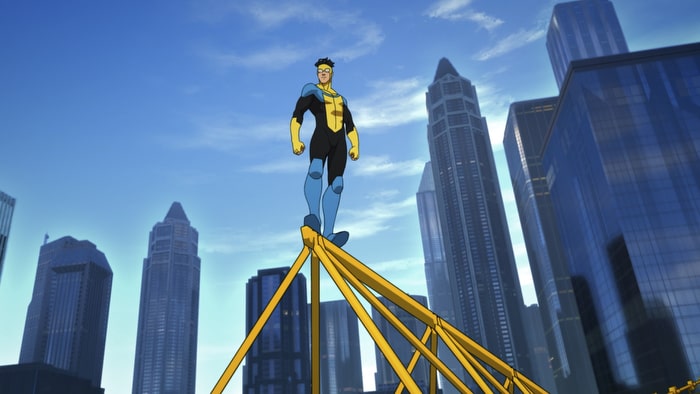 Robert Kirkman’s Invincible on Amazon Prime is an intriguing and ultra violent spin on both the superhero team story and the young superhero coming of age story. Fans who are already familiar with the character, or those who are just fans of Kirkman’s work in general, should be pleased with what looks to be a faithful, though not page for page, retelling of the Invincible story.

Kirkman’s original character, Invincible/Mark Grayson, made his debut in the pages of Image Comics’ Savage Dragon in August 2002. He then went on to have his own book, which was released in January 2003. Kirkman’s best known book, The Walking Dead, debuted later that year in October. Invincible ran for an incredible 144 issues, coming to a conclusion in 2018.

Invincible premieres with three episodes on Friday, March 26th exclusively on Amazon Prime! This review is based on the first three episodes of the series. Spoilers below!

Invincible is officially summarized as follows:

In the first three episodes, Mark Grayson is a teen who is learning to use his newfound superpowers, under the tutelage of his father, Omni-Man, who just so happens to the greatest superhero on the planet. He’s basically Superman. As Grayson grows into his powers, he meets a group of teen superheroes in the Teen Titans mold, and we also get to meet this universe’s version of the Avengers/Justice League in the Guardians of the Globe.

Invincible is, at the same time, an interesting commentary and a unique spin, on the superhero comic story. At first, the story and characters feel like generic replications of more iconic elements of the genre (more on that below), and I can’t say that the show necessarily sheds those comparisons; but maybe it doesn’t intend to.

Looking past the initial veneer however is an extremely intriguing story that focuses both on a teenager’s challenges learning how to be a superhero, and a larger murder mystery that impacts both the Grayson family, and the larger Invincible universe.

Invincible is strong on action and relational drama. There is no shortage of meta-human fighting, as the universe that Kirkman created is full of superheroes and supervillains with various powers. Thankfully, like the comic, the show wastes little time throwing the viewer into the universe and the action. There isn’t much exposition or monologuing to set the stage and that’s for the best. All the viewer needs to know is that bad guys and good guys exist. The key is figuring out who is what.

To nobody’s surprise, Yeun, Simmons and Oh are all excellent in lending their voices to their respective roles, and the Grayson family succeeds as the emotional anchor of the story. Yeun, whose voice acting background includes a memorable stint as the first ever Avatar Wan in Nickelodeon’s Legend of Korra, is convincing and relatable as a teenager who has crushes and battles bullies, while also wanting to live up to his father’s heroic legacy.

Through three episodes, Invincible succeeds on the strength of interesting character dynamics. You want to see how Mark deals with other teen heroes, how he navigates learning from his father, and how his very human mother deals with suddenly having to worry about two superhumans in her life.

As mentioned above, the superhuman characters do feel a bit like generic labels to brand name products. Characters like “Omni-Man” and the “Guardians of the Globe” obviously reference Superman and the Justice League of America. It’s reminiscent of Amazon’s other superhero property, The Boys. And like that show, the comparisons are mostly superficial, and end with a much darker and violent storyline. Regardless, it’s sometimes difficult to get over the feeling that most of the heroes and villains are a bit goofy in both name and appearance. Of course, it’s very possible that it was Kirkman’s intent to somewhat parody more well known superheroes, and that part of the later story will critique the superhero genre, but at least through three episodes, that’s not clear.

Beyond the character designs, Invincible is ultra violent. Gratuitously violent. The fight sequences are exceedingly gory and bloody and the show seems to delight in finding creative ways to show flying guts and limbs.

While I’m familiar with the source material, I haven’t read all 144 issues. However, through the first two volumes, the comic is not nearly as violent or gory as the show. Yes, there are moments when the book certainly isn’t kid friendly, but it seems to practice much more restraint and use the gore more deliberately. I wish the show had taken the same approach.

I appreciate that Amazon is building its own unique pocket of the superhero genre, and it’s a welcome one. Those who enjoy the more adult spectrum of comic book storytelling will likely appreciate Invincible’s approach. For me, the story is compelling enough on its own and the shock value of the gore was more of a distraction.

In the comics, it doesn’t seem like Mark Grayson is Asian or biracial. That the Kirkman made this change for the show, and managed to have Steven Yeun voice him, is an exciting adjustment. More creators should embrace the opportunity to introduce diversity into a story, especially when an existing work is adapted into a new medium. Kirkman created Invincible nearly 20 years ago and the book is predominantly white. Being who he is, Kirkman could have easily insisted on adapting all the characters as is, but instead he made them into diverse characters. The result is that the lead of an Amazon superhero series by Robert Kirkman features an Asian superhero whose story isn’t centered exclusively on him being Asian. That should be celebrated.