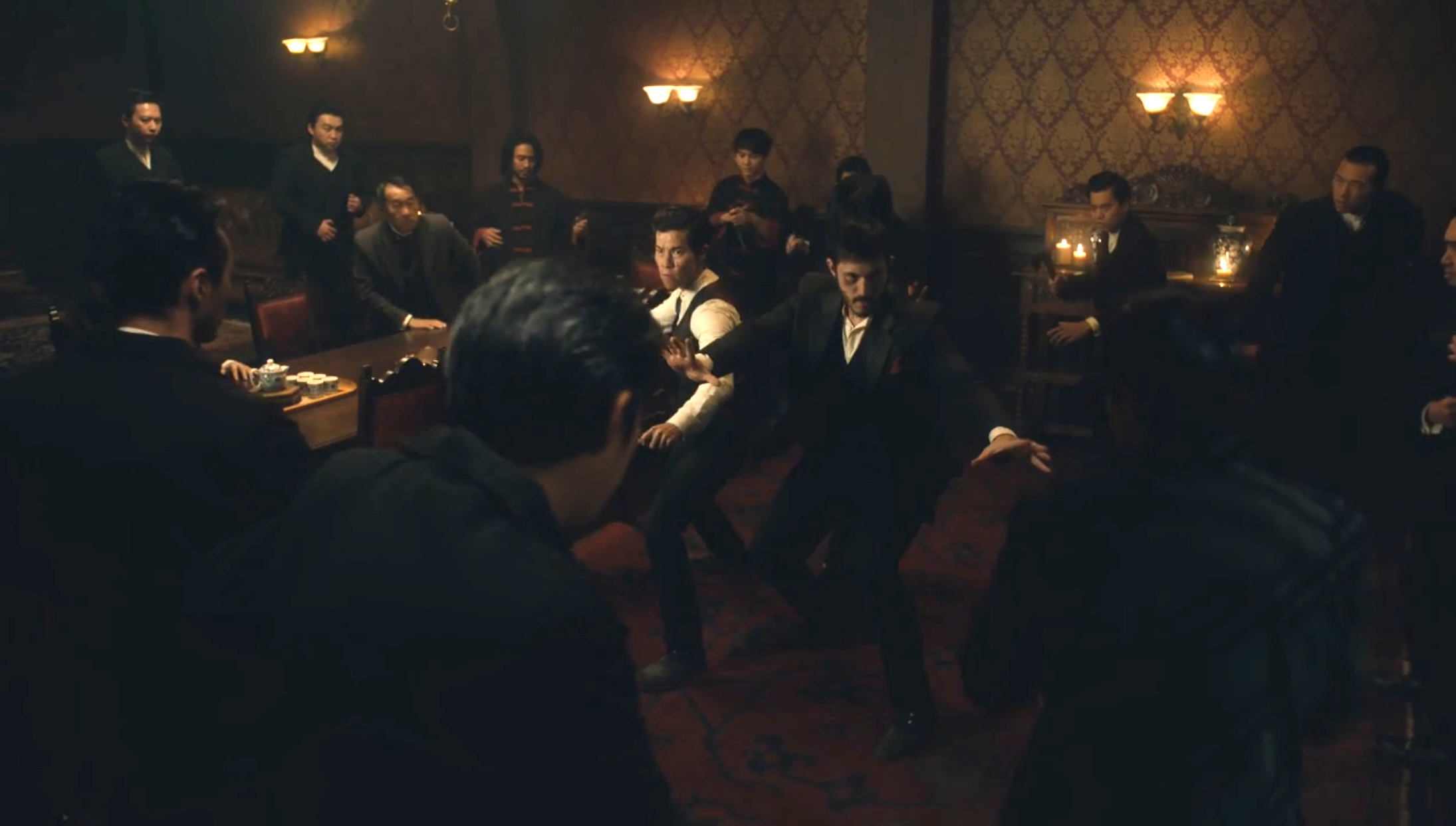 Ah Sahm, Young Jun and Hong vs. the Hop Wei

You know when you were (are?) a teen and you snuck out of the house, had an amazing time and snuck back in thinking you got away with it…only to have your parents sitting in the dark waiting for you? That’s Father Jun and Young Jun…if your dad was a mob boss. Father Jun has figured out what Young Jun and Ah Sahm have been doing behind his back and he’s not happy. After a truly epic episode last week, Warrior sets the board heading into the last few episodes of the season. Episode 7, “If You Wait by the River Long Enough,” wasn’t my favorite episode, but we probably needed a breather before the intensity that’s sure to come. Spoilers below!

Ah Sahm, Young Jun and Hong come home and find a pissed off Father Jun waiting for them, flanked by the rest of the Hop Wei. Father Jun kicks Young Jun out of the tong, using a hot iron to burn off Young Jun’s Hop Wei brand. Young Jun doesn’t flinch and takes the burning stoically. For a second it looks like our favorite trio is gonna take on the whole Hop Wei army, but Ah Sahm and Young Jun convince the rest that Father Jun is washed up and they side with Young Jun. At first I felt like this happened way too easily, but when you consider that Young Jun and Ah Sahm are out there on the front lines with these guys, and we know that at least some of them were involved in distributing the alternate optimum from Happy Jack, this has probably been brewing. Young Jun has his dad taken away and takes the head chair. He’s the boss now…right?

Later, Young Jun goes to visit his father, who’s ready to accept that his death is necessary for Young Jun to consolidate his power. But that’s old school, and instead, Young Jun is going to keep pops around. Everyone disrespects Young Jun, but his first move is a smart one.

Ah Sahm goes to Chao and places a big order of weapons for Young Jun. Chao figures out that the power has changed hands and interestingly tries to encourage Ah Sahm to consider taking over the Fung Hai, who need a leader after Zing’s arrest. Ah Sahm declines and stays loyal for now, but the show has been telegraphing an Ah Sahm rise to power all season and I’m scared at what seems to be an inevitable confrontation between Ah Sahm and Young Jun.

Elsewhere, Ah Toy and Davenport become intimate, both physically and emotionally. Ah Toy reveals her backstory. Her husband was killed on a ship and the men took advantage of Ah Toy until she had to be the captain’s concubine. She learned from her husband the value of buying property, and Ah Toy reveals to Davenport that she’s been partnering with someone to buy land in Chinatown. Frankly, this seems like an unwise move by Ah Toy.

Davenport has a great idea, Ah Toy no longer needs her partner, and instead they can transfer the property to Davenport’s trust, where there are so many assets that nobody will notice additional properties. It really seems like Ah Toy is about to buy a bridge from Davenport.

Ah Toy agrees, and goes to meet her partner and have him transfer the property. Oops, he can’t do that right now because he’s leveraged their property for some other endeavors and is in a financial hole. Instead, he goes to seem so shady goons to take Ah Toy out. That’s not gonna end well for the partner or the goons.

Later, Ah Toy and Lai are back as the Chinese Avengers, when they hear about a particularly disgusting place where Chinese women are being tortured and raped for sport. The pair clean house with Lai taking her time killing the ring leader. This is the first time we get to see Lai in the spotlight for a brief moment as we see her fury against how these women were being treated.

Ah Toy and Lai take the rescued victims to Davenport and Ah Toy surprisingly arranges to have Lai stay there as well. Lai is furious and sobs angrily as Ah Toy leaves her. This moment was heart wrenching and also confusing.

To wrap up the episode:

In the end, Mayor Blake comes up drunk and gets in a physical confrontation with Penny. He knocks out Sophie and is strangling Penny to death when suddenly her manservant Jacob appears out of nowhere, hitting Blake in the back of the head with an iron, killing him. Big day for irons.

Olivia Cheng’s Ah Toy got much deserved character development this episode. We learned her backstory, we got to see her become vulnerable and intimate with someone, and she had the most emotional scene of the episode with Lai. Ah Toy, who is based on a real life historical figure, is a fantastic character, and Cheng always kills it.

I can’t help but feel like Lai’s story is a loose end that the Warrior writers just decided to move away from. It is a large cast, so it’s hard to give every character their just due, but I can’t make sense of Lai’s story arc. After Ah Toy saves her in season 1, we never find out why she has this exceptional martial arts training, she never says a word, and now she’s gone. Maybe we’ll see more of Lai’s story some day but season 2 is not that day and the conclusion to her story was unsatisfying.

I’m very concerned where the Davenport/Ah Toy storyline is headed. Is Davenport really this benevolent white savior who creates a Chinese sanctuary in Sonoma? I recognize that Ah Toy needs to come to terms with what she’s done to secure her survival, but Sonoma can’t possibly be the paradise it’s being made out to be. And even if it is, what message is that sending? I fear that this subplot either ends bad or feels bad.