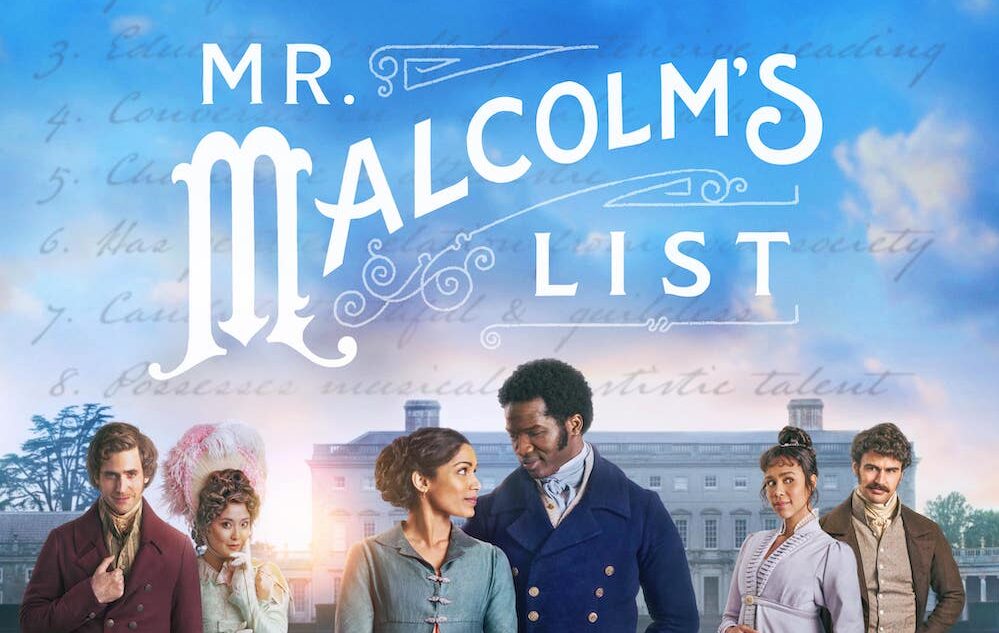 Romance and courtship in the Regency-era comes with all sorts of rules, especially when looking at high society. Julia Thistlewaite attempts and fails to gain the attention of the most eligible bachelor, one Mr. Jeremy Malcolm, due to failing a requirement on his list for a bride. When she is scorned by his rejection, she conjures up a plan for revenge. Mr. Malcolm’s List dives right into a series of beloved tropes that comes along with a romantic period piece.

In 2019, Refinery29 released a short film teaser known as Mr. Malcolm’s List overture, which garnered a lot of online attention. Regency-era stories were gaining fast traction with the mainstream, and with a star-studded and diverse cast in the short film, it has garnered over 2 million views to date. It was because of the success of this short film that the team was able to receive financial backing to produce the full-length feature.

Returning from the overture to the film includes the heroine Silena Dalton as portrayed by Frieda Pinto. Silena is easily likable, and it’s because she’s not as ingrained into high society as her friend Julia Thistlewaite (Zawe Ashton) that audiences will quickly find her charming. She is both soft and strong, not letting societal rules or difficult challenges prevent her from living her truth. Also returning is the titular character, Mr. Jeremy Malcolm, starring Ṣọpẹ́ Dìrísù. As Mr. Malcolm, Dìrísù possesses a guarded persona that protects a very vulnerable heart full of love. Together, Pinto and Dìrísù have swoon-worthy chemistry that will have audiences rooting for them from start to end. Ashton as Julia is stellar to watch as she finds the balance of comedy and drama; despite all of Julia’s schemes throughout the film due to her rejection from Mr. Malcolm, she’s delightful and a little infuriating but for all the right, relatable reasons. And with Silena and Julia, Pinto and Ashton respectively deliver touching performances as their friendship is put to the test.

Oliver Jackson-Cohen as Lord Cassidy is an unexpected, yet much-needed comic relief who also sometimes is the most sensible in every scenario. He balances out Julia’s schemes and Jeremy’s stubbornness with a refreshing presence. Theo James as Captain Henry Ossory holds a commanding presence and keeps his pace with Ashton as their two characters butt heads. Altogether, the entire ensemble is wonderfully balanced and bounce off of each other well whenever they are on screen.

There has always been a dedicated following of regency-era stories whether it be books, shows, or films. Lately, that fanbase has grown. Not only that, more regency-era and period media are putting more actors of color in lead roles. It is a celebration of representation and allows for more audience members to identify with and see themselves in lead roles as characters who get to live grand lives. It also sparks the conversation that people of color have always existed, even during these actual historical times. Mr. Malcolm’s List does all of that with an incredibly racially diverse cast that will excite fans everywhere.

Josephine is a sailor senshi by day and a ghost host by night, but really, her geeky interests encompass so much that it’s hard to list and remember. She’s a huge sucker for good *chef’s kiss* storytelling so D&D has taken over her life – and she would like to know what your favorite class is (hers is monk). Occasionally, she tries to dabble in cosplay when she’s not busy rewatching her favorite shows and movies on repeat. She also has a horrible habit of starting shows and never finishing them (someone help her).