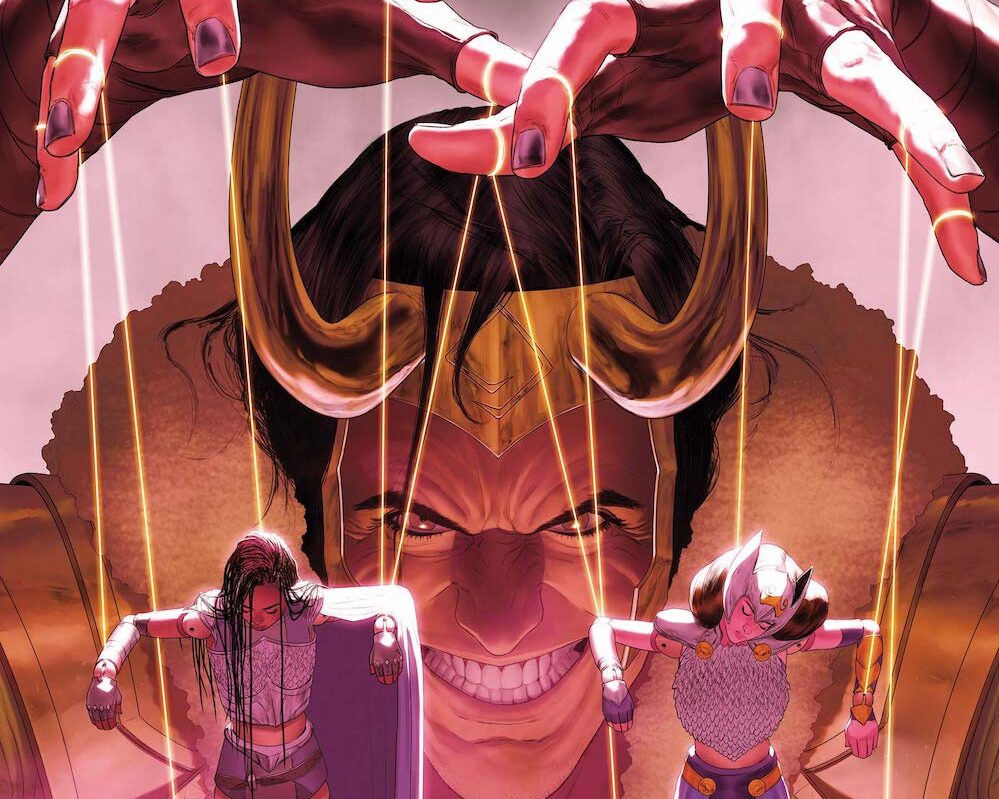 The mystery of the newest Valkyrie continues to unfurl in the third issue of The Mighty Valkyries.

Marvel Comics’ The Mighty Valkyries #3 is available now at your local comic book shop! Spoilers below!

Writer: Torunn Gronbekk, Jason Aaron
Penciler: Mattia De Iulis, Erica D’URSO
Cover Artist: Mattia De Iulis
CHILDREN OF THE AFTERLIFE! While Kraven the Hunter stalks Jane Foster on Midgard and the newest Valkyrie fights for her soul on Perdita, Karnilla, the queen of Hel, works a miracle in the land of the dead! But Karnilla isn’t Hel’s only ruler—and now she’s upset the cosmic balance. There will be a price to pay…and Karnilla intends to ensure the Valkyries pay it.

On the planet of Perdita, Runa (who recently found out her true name) is on the run with Kvasir in an effort to find out more about herself. However, the guards and citizens don’t take kindly to strangers running off with their seer – and of course, mayhem has now broken loose.

Meanwhile, back on Earth, Jane Foster is in a standoff with Kraven the Hunter. More is still in wolf form and at the mercy of Kraven, however, Jane is doing her best to keep the hunter at bay. Of course, this is easier said than done, especially when the Kraven turns his greedy gaze on Jane’s pegasus. Jane is doing all she can to deal with Kraven, while also worrying about More. But when both More and Kraven disappear and Jane heads back to the hospital, she learns she’s about to inherit a new trio to worry about thanks to Loki and Hela’s wife, Karnilla.

The Mighty Valkyries #3 is a wild ride and I mean that in the best of ways. Much like the first two issues, Aaron and Grønbekk’s stories weave together brilliantly. While the duo is credited together for Jane’s part of the story, Grønbekk has the sole writing credit for Runa’s story, and both are epically written even though they’re very different in tone. There’s a more fun-loving nature to Runa’s story, whereas Jane’s story is much more eerie, especially with More and Kraven the Hunter added into the mix.

The twist that occurs in issue #3 is equal parts exciting and ominous, particularly as it pertains to the storyline between Jane, More, Kraven and the triplet girls she doesn’t know she’s now bound to. Getting into the mind’s eye of the Hunter was both interesting and disconcerting, but it all served to make the tale more thrilling. Although this is still the early stages of Kraven in The Mighty Valkyries, it will be very interesting to see how he continues to make his presence known throughout the book. I am interested in seeing him and Jane fully go toe-to-toe when the time comes.

In juxtaposition to Jane’s story, after Runa has kicked some major butt, she’s off to Vanaheim with Kvasir. Although she’s unsure if this is the best decision, she trusts the oracle and brings him home. Besides, he hasn’t led her astray thus far.  Upon reaching Vanaheim, Runa is posed a question of what she should do next. While she half jokes about remaining on Vanaheim and helping Kvasir with the roof of his home, the oracle points out that she is needed for much more than that. She has a greater purpose in this world and she must do what she can to remain true to that purpose. As I said prior, this storyline is one that isn’t as dark. However, that doesn’t mean it’s any less great. In fact, it provides a much needed levity throughout the comic that I enjoyed and by the end, it looks like Runa is on her way to team up with Jane.

Only three books into the new series, I am loving what Aaron and Grønbekk have done thus far. Likely with many more mysteries to still unravel, The Mighty Valkyries #3 is definitely a must-read!