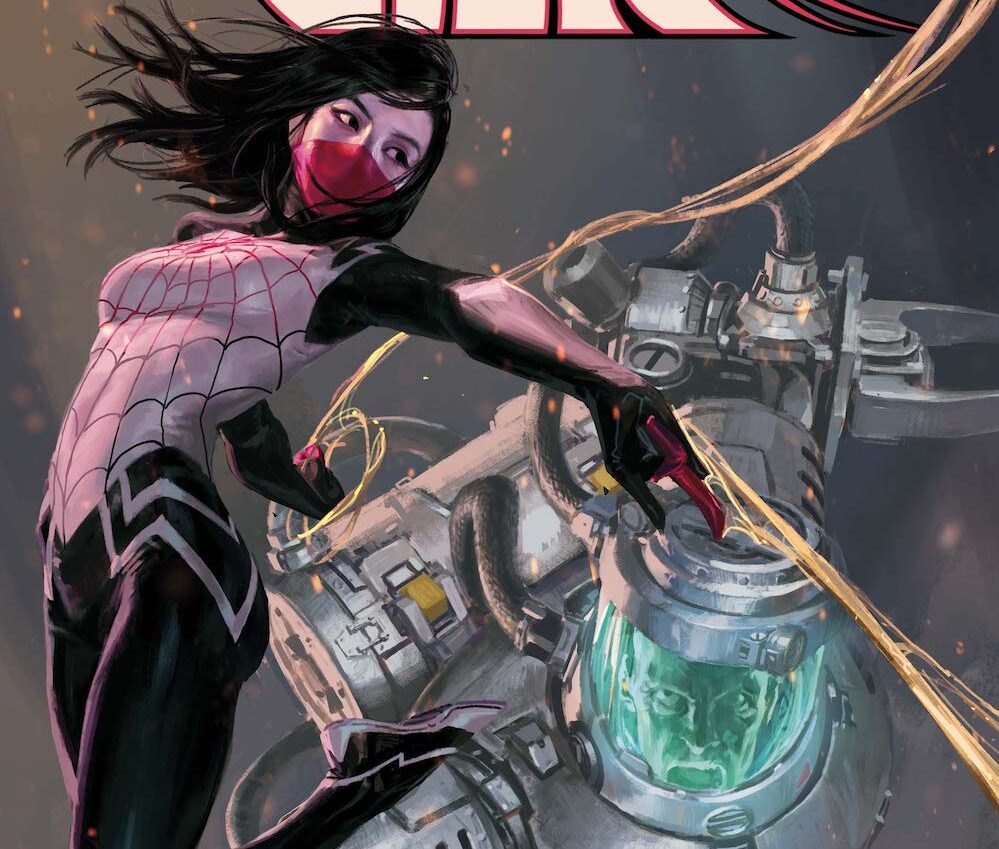 When I heard Silk (Cindy Moon) would be returning in a new series in 2021, I was so happy! I started reading Silk back in 2016, and this latest run has been great. It’s awesome to see Silk, a female Asian American superhero, back in her own solo run. I think writer Maurene Goo has done a wonderful job capturing Cindy’s voice of confidence, inquiry and wit. And I’ve been a fan of Ian Herring’s colouring since Ms. Marvel (2014). The way he uses colours to define space and set atmosphere really helps you visualize the feeling and tension in the space our hero is in. Takeshi Miyazawa’s art style is expressive and dynamic, especially in capturing the fight sequences, which is perfect as we see Saya Ishii confront and battle Kasha, the cat demon who was her supposed partner-in-crime, in this issue.

Writer: Maurene Goo
Penciler: Takeshi Miyazawa
Cover Artist: Pyeong-Jun Park
INTERVIEW WITH AN EVIL CYBORG! Silk learns the truth about Saya Ishii from a chat with Silvermane! But he’s not about to let her live to tell the tale…Meanwhile, Saya goes toe-to-claw with the cat demon, Kasha!

One of the perks of the current run is the brief recap at the start of each issue reminding us where we last left our hero. We last left Cindy Moon as she arrived at an abandoned office building following a tip she received about Fujinet, and discovered Silvermane as Saya’s father. As Cindy shakes off the surprise, Silvermane explains how he came to know Matsuko, Saya’s mother, and how he came to be part of his daughter’s life when she was a teenager. He further elaborates on how Saya came to the U.S. with him the summer she graduated university, and learned both sides of the family business.

Silvermane faked his death in order to leave the company to Saya, and warns Cindy not to cross paths with her. This trip down memory lane is interspersed between Saya’s confrontation and battle with Kasha. Saya interrupts Kasha as she summons her master from another realm. She becomes enraged at Kasha’s plan to destroy the world because it undermines her authority and plans to take over the gangs in Queens. Saya gains the upper hand at first, but is overwhelmed, and ends up using her powers, a cross between magic and technology, to retreat. Just as Cindy rushed home from being chased out by Silvernmane’s goons, she is relieved to find her brother safe and sound. But as our hero takes a breath of relief, she’s surprised to find Saya in her room requesting for help.

Silk #4 is a balance between quiet narration and explosive fight sequences. It’s also got the most amount of narration used thus far in the series. So far, Silk (Cindy) is engaged in frequent dialogue with other characters, or her inner monologue. But in issue #4, narration by Silvermane is used as exposition to contextualize Saya, her life and her ambition to challenge, and probably destroy, her father’s legacy. To balance this, Saya’s battle with Kasha further complicates what she is capable of, as her powers demonstrate agility, speed and technology. She’s not just a tech CEO/influencer it seems!

I’m so excited to see what the final issue has in store! It’s still unclear when Saya and Kasha crossed paths, or what Saya’s powers are really about. While this issue was a bit quieter in comparison to the first three, it was still exciting, fun and mysterious. I’m pretty sure Silk (Cindy) will help Saya, but what their alliance will entail is curious. Still thrilled to see Silk back in a solo series!