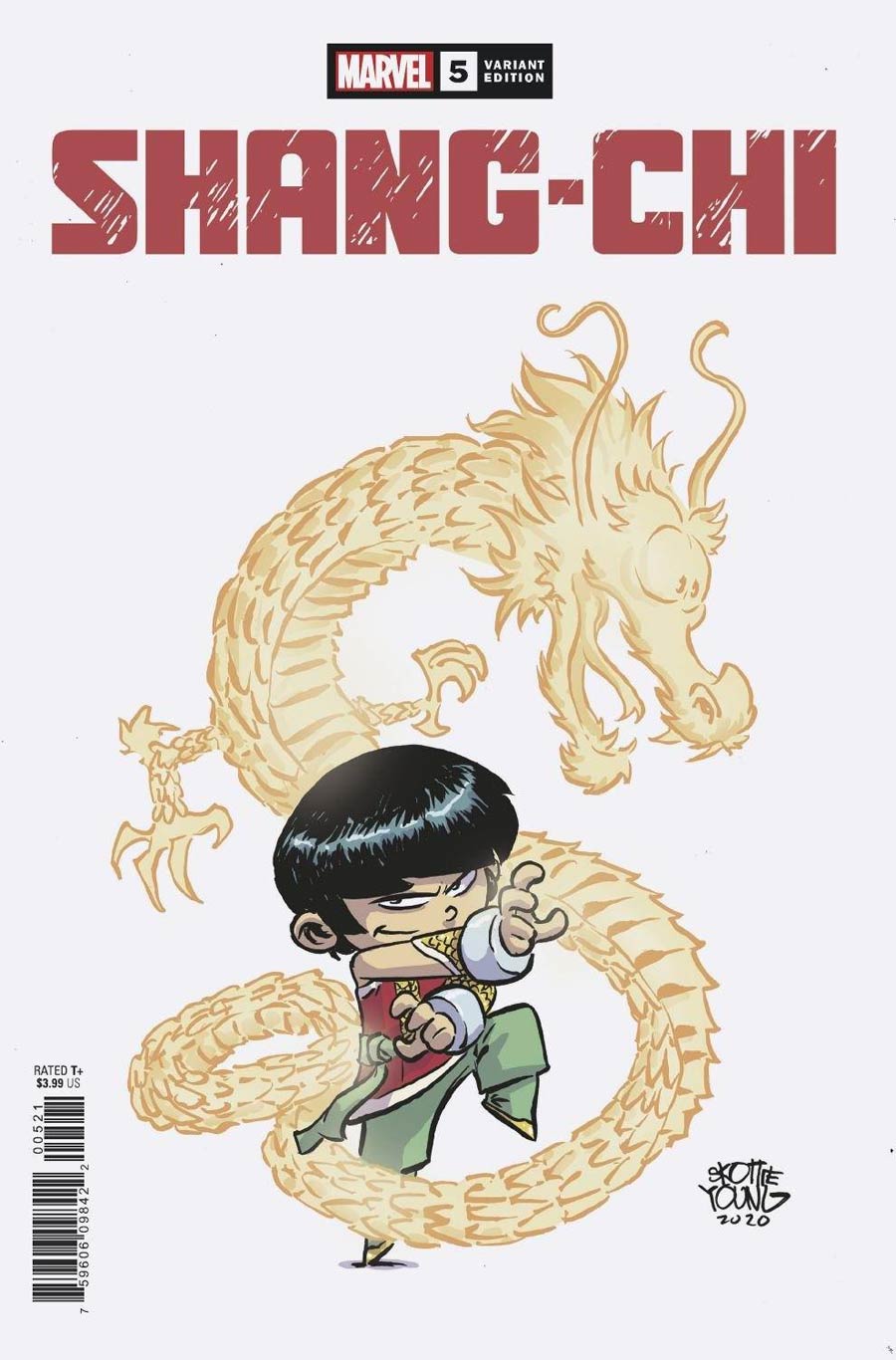 The Master of Kung Fu’s latest (and best) refresh comes to an epic conclusion with Shang-Chi #5. The question is how long it will be until the next Shang-Chi story arc and whether Marvel will move forward with another mini-series or possibly an on-going comic.

After this final issue, Shang-Chi will return in a one-shot comic, The Legend of Shang-Chi #1 by Alyssa Wong and Andie Tong, releasing in February. He can also be seen in the current Avengers arc, Enter the Phoenix.

Shang-Chi #5 is available at your local comic book shop this Wednesday, January 28th! Support this book so Marvel will give the character (and this creative team) the on-going it deserves! Very light spoilers below!

It’s showdown time. Shang-Chi has gotten the wisdom he needed from the spirit of his uncle Zheng Yi, and with Brother Blade and Sister Dagger at his side, it’s time to stop Sister Hammer and her Jiangshi (Chinese spirit zombies).

We see a bit more of Leiko Wu in this final issue. It was nice to have Wu, a character who is so prominent in Shang-Chi’s history, appear repeatedly throughout this series. I wish she was given more to do, but she represents a connection between Shang-Chi’s past and present and I enjoyed her appearances.

Sister Dagger and Brother Blade have been consistently entertaining characters, and they are excellent additions to Shang-Chi’s world of supporting characters. They’re great again in this final issue, though it would have been nice if we would have gotten a chance to see each get more of an individual spotlight during this series. Sister Dagger must be so much fun to write for Gene Luen Yang.

The climax of the story comes down to a spiritual connection between Shang-Chi and Sister Hammer, and through that connection, Shang-Chi (and the reader) is able to experience critical moments of Sister Hammer’s history and trauma. Just as Fu Manchu Zheng Zu has been a thorn in Shang-Ch’s side all his life, he has been a similar source of suffering for his sister. The difference though is that while Shang-Chi has wanted to escape the burdens of his family, Sister Hammer has found a bizarre life purpose from her filial responsibility. She doesn’t want to be free of their father, she wants to earn his posthumous approval.

Dike Ruan’s art has been a perfect fit for this series, and his work shines this issue with a variety of action sequences. Ruan’s style gives the feeling of constant and fast paced motion, and the action in this book really popped thanks to Ruan. Plus, he just makes characters look cool.

As this miniseries concludes, we see that this story was really about family. In our interview before the start of the series, Gene Luen Yang talked about how the story became more about family than even he expected. You might think a Shang-Chi miniseries would be about martial arts and fighting, but it makes sense that a story that really delves into who Shang-Chi is as a character, beyond the punches and kicks, would be about his family ties. After all, the character is largely defined by his connection to his father.

Since Shang-Chi’s origin, his father has loomed large in all of his stories, but that relationship has never been explored beyond the surface level, good vs. evil, characterizations. Gene Luen Yang, Dike Ruan and Philip Tan did a fantastic job through this series showing what kind of human impact Zheng Zu’s villainous history has had on Shang-Chi and others around him.

For possibly the first time in Shang-Chi’s nearly 40 year history, we got to meet Shang-Chi the fully developed character.

It’s been a frequent concern of mine throughout this miniseries, and now that we’re at the end, I have to admit that there just wasn’t enough martial arts action. This issue itself has plenty of overall action, as mentioned above, but it doesn’t deliver the martial arts excellence that I think fans of Shang-Chi thirst for.

Gene Luen Yang had to navigate a difficult balance between making Shang-Chi a well rounded character beyond his fortune cookie depictions of the past, and giving readers what they would expect in terms of Kung Fu action. While Yang did a great job with the former, it possibly came at too much of the expense of the latter.

In this final issue we get more glimpses of Shang-Chi’s martial arts skills. It’s been a consistent trend throughout that we see Shang-Chi flex his skills briefly in eye-popping moments. But those moments are too few and far between. Further, it would have been understandable if all of that culminated in a martial arts showdown between Shang-Chi and Sister Hammer, but that’s not how the finale plays out. From a story perspective, I can see why that choice was made, but dammit I wanted to see fight panels that few other books can match!

This series is a huge win for Asian representation is comics. Not only did we finally get to see Shang-Chi as an actual character, but we now have a variety of new Asian characters in the Marvel Comics universe. Hopefully characters like Leiko Wu, Sister Dagger, Brother Blade and even Sister Hammer can be integrated into other Marvel storylines.

The book also ends with Shang-Chi placed in a position where he could have a much more substantial impact and presence in the Marvel Universe than before. I hope that status is further developed in an on-going comic in the near future.