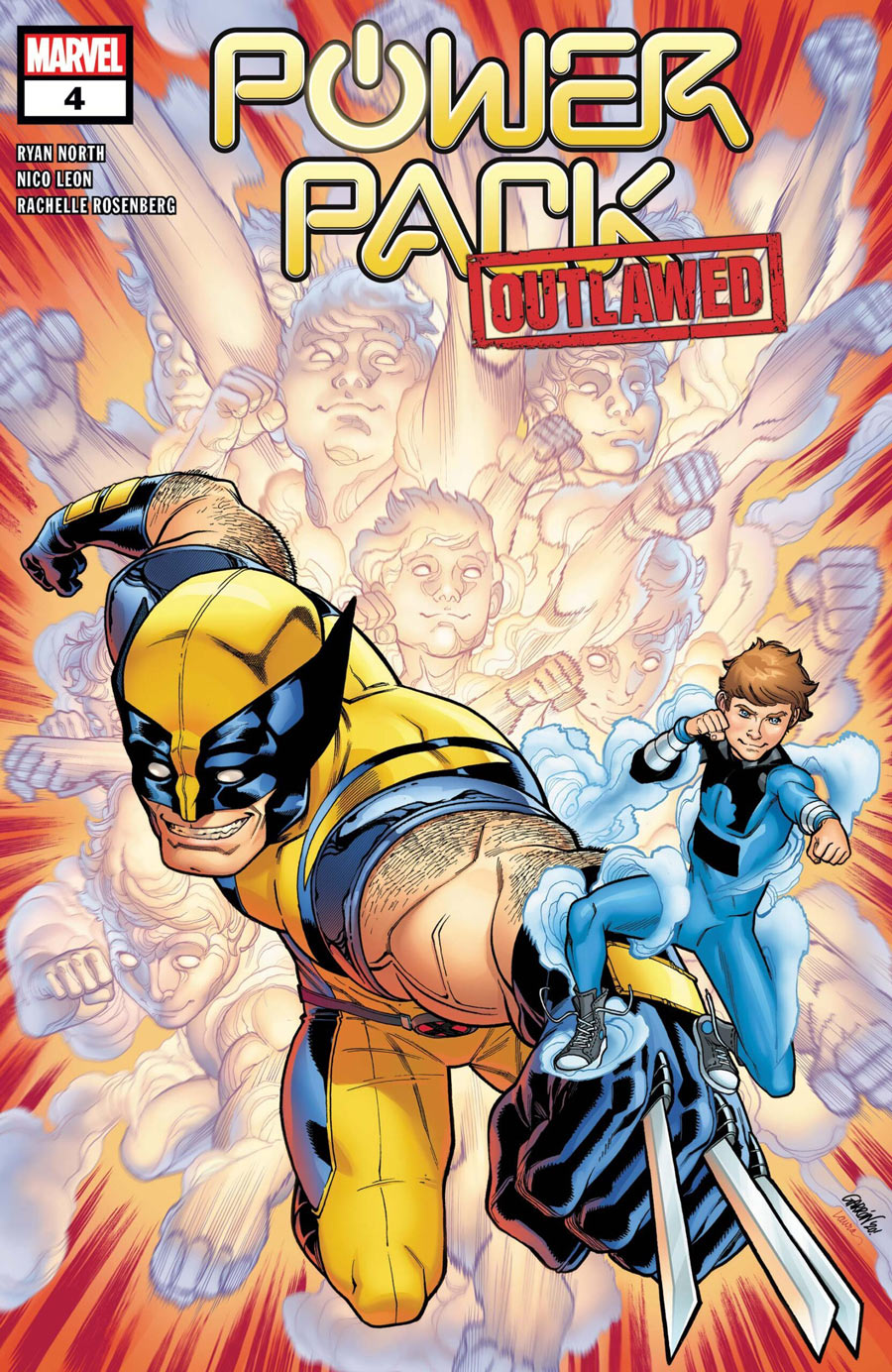 Last we saw the Power Pack, they had been caught by their mentor, the Wizard aka Agent Aether. The Wizard double crossed them and stole all their power and now it’s time to see how they get out of this one!

Power Pack #4 is available at your local comic book shop now. Spoilers below!

Writer: Ryan North
Penciler: Nico Leon
Cover Artist: Javier Garron
Hey guys, what’s up? Jack “MASS MASTER” Power here, and I’m narrating this issue of Power Pack, so they also let me do the solicit! JULIE narrated the last issue, and we all saw how well THAT went (aw, just kidding, Julie) (…unless?), so it’s time for the big guns! Let’s master some mass in this thing!! Anyway, bad news, Massheads — in this issue I get PLAYED by my HATERS into FIGHTING FOR MY LIFE against someone who is trying to MESS UP MY ENTIRE FAMILY, so let’s just say: Things get a little TOO real! Also there’s a special guest star…WOLVERINE!! He’s on the cover. I tried to get them to add a red arrow to it, pointing toward him with a circle around his claws, but they said that was “clickbait,” and I said, “Lol, I know.” And remember: Real heroes don’t forget to like (this comic) and subscribe (to this comic through their local comic book store).

This issue is told from Jack’s perspective. I absolutely loved the opening! Jack introduces us to his vlog “Master_Of_Mass”; what looks like a modern day Youtube channel. He even has a call for subscribing to his channel. Every beat in this part is perfect! It’s too bad that Jack can’t create his channel, as it would get them killed, and expose their true identities.

The kids are trying to outsmart the Wizard. Katie has a little bit of energy left, so the team sets her up to take one last shot! Unfortunately, she almost gets a bystander killed, which is her worst nightmare. Katie gets so mad that she takes another shot at the Wizard. I have no idea how she gets more energy to use, and almost hurts the bystander on purpose. It’s scary for her brothers to see her unleash her power indiscriminately without care of who she hurts in the process.

Villains really do talk too much! We get the whole exposition on the Wizard and why he captured the team. Instead of donating the energy that the kids created, he sold it to a multinational company running the power grid and made himself rich. After bragging about this, he flies away. It’s not even worth his time to kill the unpowered Power Pack.

Julie comes to the conclusion that the machine that the Wizard used to extract powers from the siblings has left them with some residual anger. All the siblings are frustrated with how this has turned out, but they are back where we started our story – in need of a mentor.

Surprisingly, they turn to Wolverine! The kids leave a note for him at the Mutant embassy, and he shows up at their home. The kids tell their parents that he is their new tutor and the issue ends with the Power Pack and Wolverine concocting a plan to finally get even with the Wizard.

I had so much fun with the opening of this issue! It might be that I’ve been looking at too many Youtube videos, but it was so on point with all the phrases you hear used in videos. I love the art style of this comic, and the colors are so bright that they grab your attention! Even Wolverine looks a bit cuddly.

We have one issue left in this story, I’m here anxiously awaiting the conclusion to “Power Pack: Outlawed!”