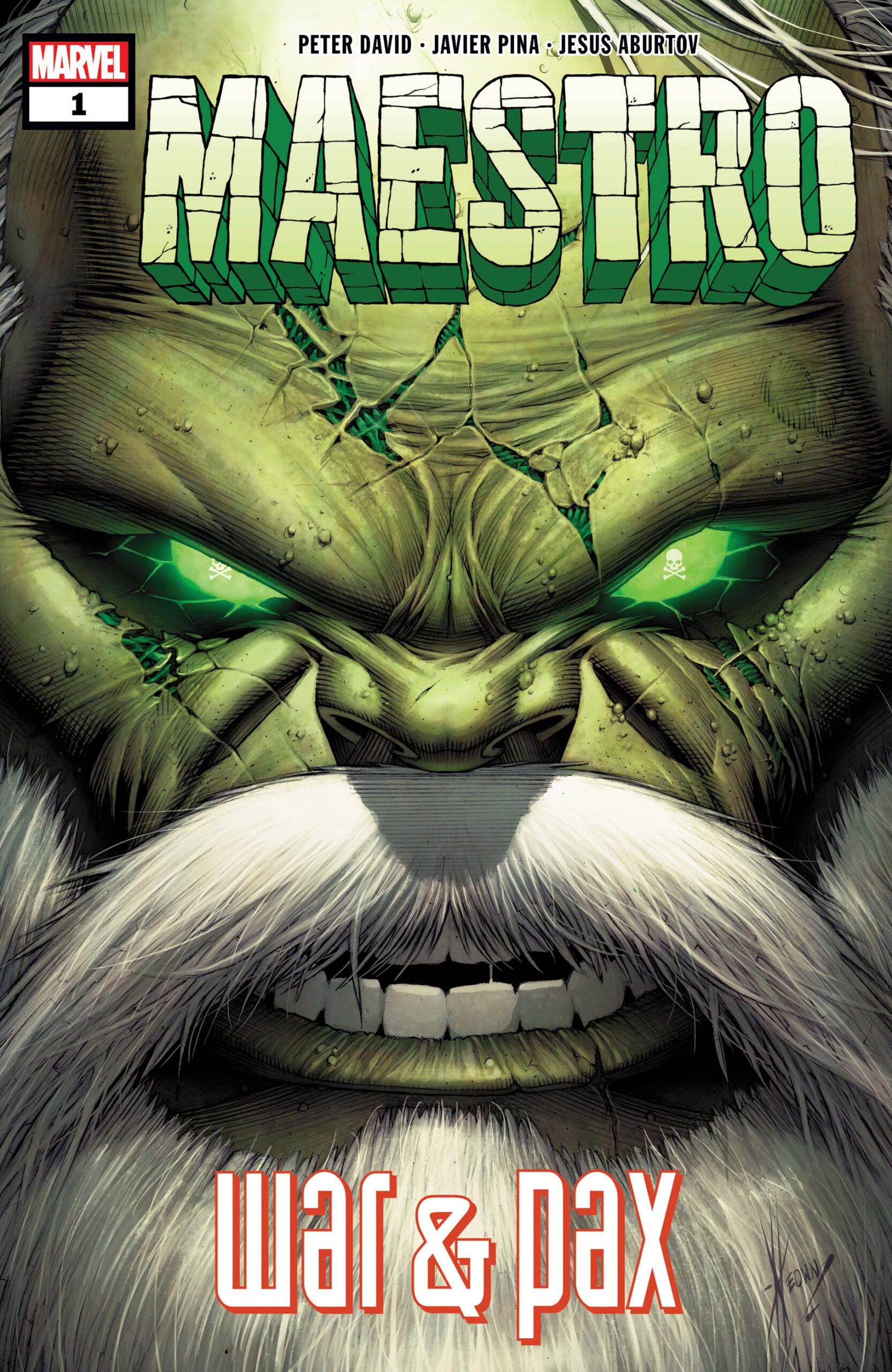 The Hulk is no more, and in addition the man he once was, Bruce Banner, is not the same anymore either – he’s simply, The Maestro.  Maestro is back in Peter David’s Maestro: War & Pax and he’s looking to make sure that everyone on earth knows who their one true god is. Maestro’s goal is to remove division and the way he plans to achieve this is to have complete dominion over all.

Writer: Peter David
Penciler: Javier Pina
Cover Artist: Dale Keown
PETER DAVID AND THE MAESTRO RETURN IN A BRAND-NEW SERIES! The man once known as the Hulk is now neither man, nor Hulk — call him only THE MAESTRO! After deposing Dystopia’s ancient ruler, the Maestro sets his sights even bigger. It’s time the entire planet Earth recognized their one true god! But the Maestro isn’t the only immortal left…and if he wants to truly dominate the planet, he’ll have to face the most powerful beings in creation! PETER DAVID continues the tale that began decades ago in the legendary Future Imperfect!

David’s introduction to The Maestro in the first issue of Maestro: War & Pax is certainly a great one. It has all the pomp and circumstance one would expect from a larger-than-life character with a huge ego and a god complex. Maestro believes himself to be all-powerful and there isn’t anything or anyone that can get in his way. This is seen in the issue when Maestro quickly disposes of a group who refer to themselves as “The Stalkers” and even some of their children (clearly, very unlike Banner).

The story is an intense one from the get-go, and it begins and ends with action-heavy scenes that will surely set the tone for the upcoming issues. Not only do we get to see The Maestro doing what he does best as he tries for world domination, but we also get our first glimpse of The Pantheon – who are doing their best in trying to figure out how to engage, or perhaps disengage, from the havoc Maestro has wreaked. Oftentimes, no one really knows a character the way that the person who created them does and that shows in War & Pax. It was enjoyable to see David return to a character that he created almost three decades ago.

It’s been a while since I’ve personally read a story that focuses on the villain, but David’s work with this book certainly wants me to continue on this journey. David really delivered on the dialogue within the book, specifically as it pertains to Maestro v. Maestro. I was very intrigued by the warring with self that happens throughout, and the insights into Maestro’s mind were some of the comic’s standout moments (outside of the action).

To be quite honest, there wasn’t much that I can say in terms of “the bad”. My only mild complaints lay in the fact that I wish there was more dialogue between Maestro and some of his compatriots (outside of The Minister). We see Maestro speak to his enemies and a group of children before vanquishing them, he also yells at a group of women in his stronghold, but most of his interactions outside of his own thoughts were all with his opposition. It would have been interesting to see how he interacts with someone who he would probably feel is a little more on his level. However, I am sure this will come in due time.

The other part was that I was excited to see The Pantheon when they arrived in the comic, but we hardly get much time with them. What we do get is entertaining – the bickering between the members, Atalanta asserting her leadership, and more, but I wish we got to see them for a longer period of time – especially with the arrival of a visitor at the book’s end. But again, this is only the first issue and I am sure there is much more of The Pantheon and guest to come as the story plays out in the upcoming comics.

All-in-all, Maestro: War & Pax was an exciting start to the five-part series. With Maestro wanting all of the world to kneel before him, it’s clear to see just why they feel they have no choice but to obey – save for the small group of hidden survivors at Haven in Washington, DC. I cannot wait to see what David has in store for the rest of this intensity-driven escapade.