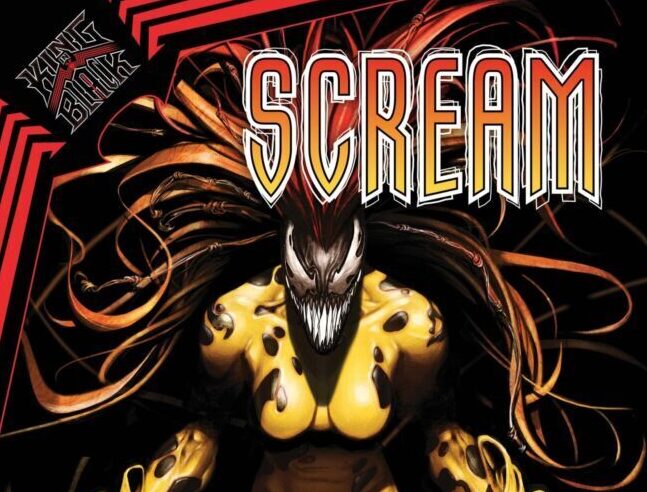 This is not Andi Benton’s first time at the symbiote rodeo. She’s fought many a symbiote before, however, she’s never faced the might and power of Elder God, Knull. In this King In Black tie-in, Scream must do all she can in an attempt to find the vulnerability in Knull’s symbiotic armor. Is this where Scream meets her end or will she prevail to save the day?

King in Black: Scream #1 is available now at your local comic book shop! Spoilers below!

Writer: Clay Chapman
Penciler: Garry Brown
Cover Artist: In-Hyuk Lee
SCREAM RETURNS! Andi Benton has faced other symbiotes before, but never has she faced the power and might of KNULL himself! Does SCREAM have what it takes to put a dent in Knull’s symbiotic armor? Or is this the end for SCREAM?

In Clay McLeod Chapman’s King In Black: Scream, we see Andi Benton a.k.a. Scream battling to save children from the wrath of Demagoblin. Scream must put a stop to Demagoblin luring and brainwashing children into following blindly following her, all the while, Knull has the world covered in a symbiote dome. The odds are certainly not in Scream’s favor, but that doesn’t stop her from trying her best to save the children and the day.

The comic is at its best when you hear the internal struggle and conversations between Andi and Scream. Andi tells Scream not to hurt or injure anyone while they’re possessed, but Scream points out that such a thing might be impossible. Seeing the character battle through all of this while trying to save a group of children from a doomed fate was compelling. Not only that, but Andi fights with the idea of her gift of “hellfire” being a curse, while Demagoblin believes that only one who is unworthy would see it as a curse instead of a blessing. The story definitely has a horror element to it that many will enjoy, but for those who may not particularly be fans of horror, this book might not be the best vibe for you.

The artwork by Garry Brown is visually stunning and fits the realm of Scream with ease. The fight scenes within the comic are extremely well done and the colors by Rachelle Rosenberg are equally great, and help tie everything together perfectly.

The book serves as a good place to start with those who may be unfamiliar with the character and it’s also a good read for fans of Andi Benton/Scream. That being said, it might be better to read some of the other books in from the King In Black storyline prior to reading this Scream one-shot.