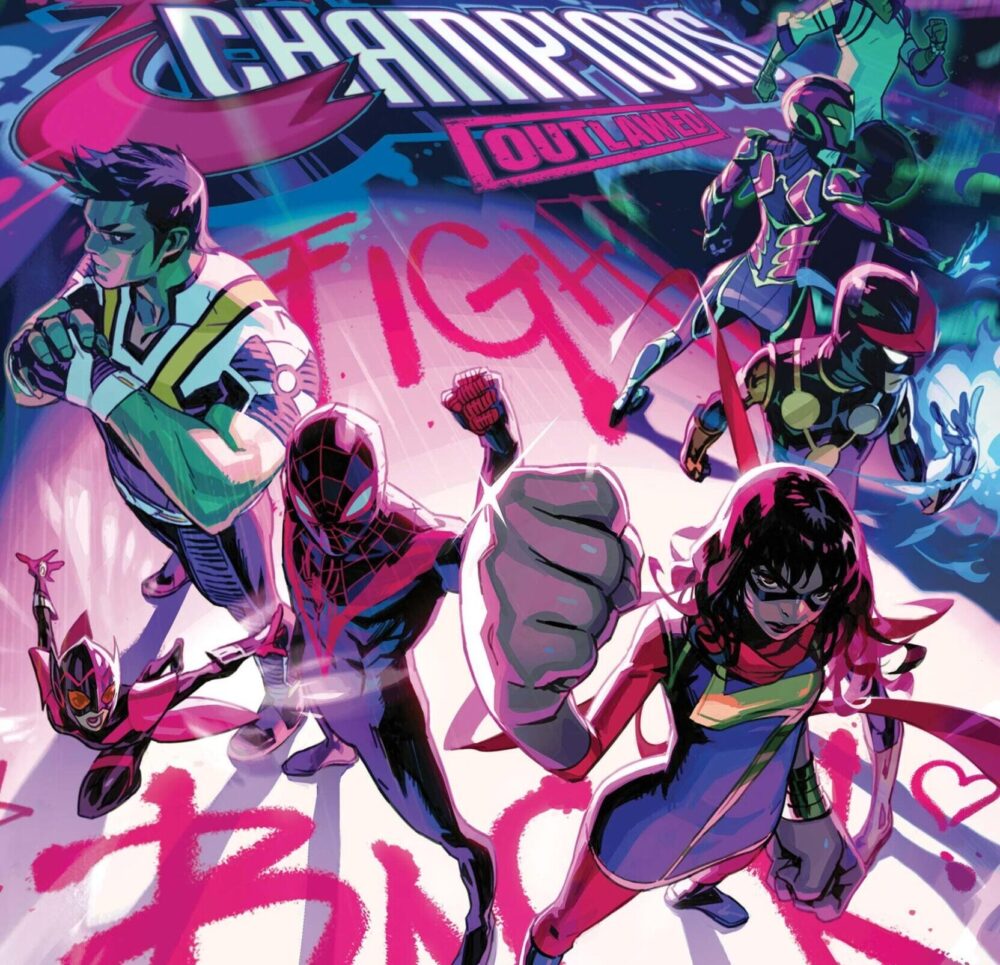 We left off at the end of issue $4 with the Champions and Viv Vision making their way back to the city to try to “take it back” and to finally do away with the unjust Kamala’s Law! This issue wastes no time kicking it into high gear!

Champions #5 is available now at your local comic book shop! Spoilers below!

Writer: Danny Lore, Vita Ayala, Eve Ewing
Penciler: Robert Quinn, Luciano Vecchio
Cover Artist: Antonio Infante
The Champions are done running. The time to stand up and fight is here. But can they win when an entire government is aligned against them? And if they can’t….where do the Marvel Universe’s next generation of heroes go from here?

REVIEW – The ‘Outlawed’ Arc Comes to an Epic Conclusion!

We start this issue with Amadeus Cho and Viv Vision breaking into C.R.A.D.L.E. headquarters to release all of the young heroes they have incarcerated! Seems Roxxon is in charge of these facilities, and they are using them to silence these kids.

Riri goes home to Chicago, and brings along Miles, Kamala, and Nova. The scene with the Champions and Riri’s mom was great! Ms. WIlliams understands what her daughter and friends must do, and has accepted that this superhero stuff is her “calling.” I love that she says “I want you to act boldly and have your eyes wide open about the consequences.” Way to go mom!

Riri, Kamala, Miles and Nova go to Riri’s headquarters to broadcast a message, but are interrupted by the kids that escaped the C.R.A.D.L.E. facility. Thanks to Amadeus’ quick thinking, he downloaded surveillance video while rescuing these kids earlier, the Champions are able to show evidence of what was going on in the facility. They broadcast the video, and the people watching seem a flabbergasted by what they have seen.

With little choice, Senator Patrick orders these “schools” shut down. The tide has turned against him, and people want him to overturn Kamala’s Law. I’m not sure that this will be the outcome, but the Senator has agreed to disband the re-education centers while the law is re-evaluated, and C.R.A.D.L.E. is being rolled back as well. So our heroes have a respite at the end of this arc.

This issue was packed with action! The breakout of the Roxxon/C.R.A.D.L.E. facility; the stand down with Senator Patrick; and the last scene setting up the new upcoming arc! I want to keep gushing, but it’s better for you to go read it! I can’t wait for the new arc and I’m laughing thinking of that last panel!