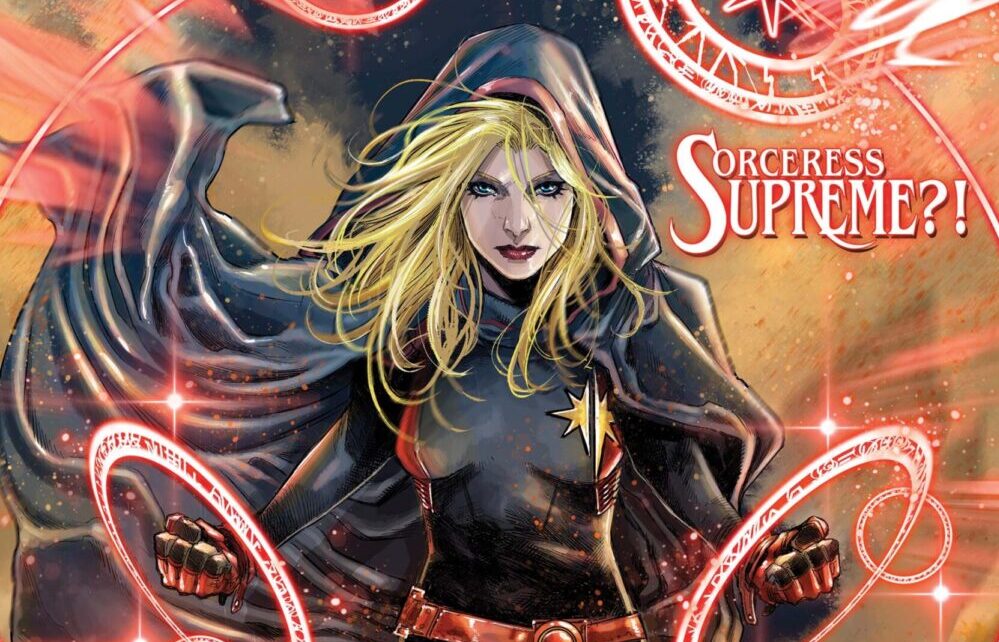 Marvel Comics Captain Marvel #28 kicks off a three part story arc called “Strange Magic,” where Carol Danvers seeks to learn magic in order to prevent her vision of an apocalyptic future from coming true. The story is very light on action, but offers some interesting character dynamics between Carol and several Marvel heroes, particularly Stephen Strange and Spider-Woman.

Captain Marvel #28 is available now at your local comic book shop! Spoilers below!

Writer: Kelly Thompson
Penciler: Jacopo Camagni
Cover Artist: Marco Checchetto
TOIL & TROUBLE! Carol Danvers is a born soldier. Give her a field of battle and an enemy to punch, and she’s unstoppable. But the Captain’s Achilles’ heel is about to break. The mystic arts are Carol’s one true weakness, and – haunted by her failure to stop the villain Ove – she’s on a mission to correct that weakness…at any cost. A brand-new arc kicks off with artist Jacopo Camagni’s supernatural talents!

Carol Danvers has a recurring dream where her failure leads to the death of her friends and fellow superheroes. The calamity is all her fault based on the explicit blame placed on her by the other heroes in her dream. It’s very reminiscent of the kind of visions and guilt that Tony Stark carried around in the Marvel Studios films, and not unlike other apocalyptic storylines.

Here, Danvers is responsible for all the death and destruction because she can’t stop Ove, the son of King Namor of Atlantis and Amora the Enchantress of Asgard. Determined to prevent her nightmare from becoming a reality, Carol sets off to strengthen her primary area of weakness – magic.

She first meets with and confides in Jessica Drew, Spider-Woman. Drew promptly takes her to the Sanctum Sanctorum, to see Stephen Strange. The moments within the Sanctum with Jessica, Carol and Stephen are the highlight of this issue, as writer Kelly Thompson’s light and whimsical writing style lends itself well to the mystical setting. Jessica realizes that there’s a romantic history between Stephen and Carol, while Carol gets into a heated argument with a pair of magical talking snakes. It all makes for an enjoyable few panels that highlight the more intimate relationships that these heroes have when they’re not fighting villains.

While reluctant at first, Strange agrees to help Carol and takes her to a magical place called the “Bar with No Doors” since it’s a place that can only be accessed through magic. Carol dons a new costume for the occasion that really looks fantastic. While I like Carol’s standard look, the charcoal and red color scheme with gold accents, complimented by a hood and cape just looks awesome. I definitely wouldn’t mind if she kept this look for some time.

When Strange’s efforts don’t help, the two have an awkward kiss and Carol storms off to seek help from other magic users in the Marvel universe, like Wanda Maximoff, Doctor Voodoo and Wiccan. She finds that Strange has already been in touch with all of them and discouraged them from helping her. These brief cameos are fun as we get to see a sample platter of various magic users in Marvel comics, but it felt odd that Carol would so quickly turn her back on Strange’s help after begging him to assist her. Strange is the Sorcerer Supreme, so very awkward romantic dynamics aside, there isn’t anyone else better equipped to help her. It’s also unclear why Strange would intentionally undermine Carol’s efforts to seek help elsewhere after he agreed to provide support. Is he merely being petty?

In the end, Carol has no choice but to see the aid of Enchantress and offers her a deal. The cliff-hanger ending is intriguing enough to bring readers back next issue, but I’ll be giving this arc a short leash. The characterizations and dynamics of Carol and Strange are not my favorite and if the second issue of this arc doesn’t grab my attention, I may consider skipping the third and final issue.