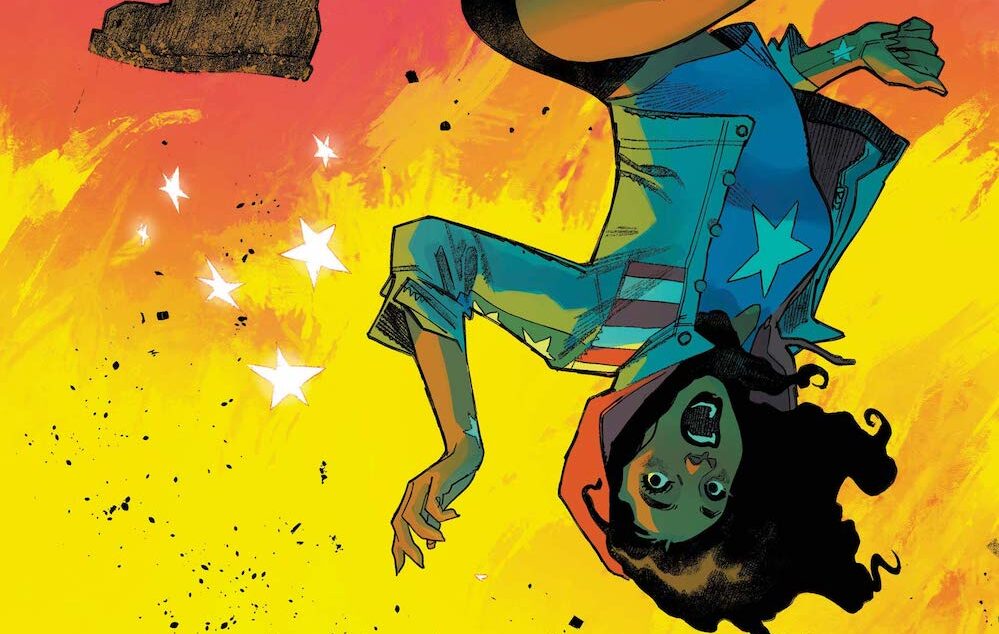 It’s been awhile since America Chavez was in a series of her own! It’s great to that see she’s back, and this time we’re learning more about her past and family. Up until issue #4, America has been tracking down a mysterious figure who claims to know her past better than she does. It certainly puts America’s sense of self and family into question. And now America takes the leap to uncover what truly happened to her moms and how she ended up in New York as a little kid.

America Chavez: Made in the USA #4 is available now at your local comic book shop! Spoilers below!

Writer: Kalinda Vazquez
Penciler: Carlos Gomez
Cover Artist: Sara Pichelli
AMERICA CHAVEZ knows the face of her enemy. She knows what’s at stake if she fails. But she doesn’t know the truth of her past…yet. She’s about to find out.

REVIEW – America learns the truth about her past!

America has tracked down the mysterious figure who targeted and attacked her adoptive family in New York City. The mysterious figure happens to be a young woman named Catalina, who claims to be her younger sister. Catalina has led America back to the Utopian Parallel, which turns out to be a research lab on an isolated island, rather than another dimension as she had believed for most of her life. For any readers who are uncomfortable with seeing death on the page, please know there is a scene containing death and gun violence in this issue.

Issue #4 of America Chavez: Made in the USA is one of the more emotional parts of the run so far. It disrupts a lot of America’s supposed origin story, and complicates it by revealing more sinister events that took place in her past; especially that cliffhanger of an ending! Just as America regains her memories, Catalina returns with America’s adoptive brother, Berto Santana, as a hostage!

I’m enjoying Kalinda Vazquez’s writing, especially how the story explores the theme of family and the tensions between family members. In previous issues, we got to see the Santana family, America’s adoptive family, and her relationship with them. In issue #4, we get to see more of her moms and the decisions they made thinking it would help their kids. Just as it seems like America understands Catalina’s motivations, we’re left with a cliffhanger as both sides of America’s families collide into each other. So as much as the story is about America and her origin story, it’s also focused on family. By exploring family, and the different people who have influenced America and her identity, it can offer a greater portrait and representation of Latinx communities.

I think Jesus Aburtov’s colouring really helped convey how young America viewed her old home on the island as some kind utopia because of its rich and lush landscape. Carlos Gómez’s artistic style also helped communicate the range of stress and emotions characters experienced, such as America’s moms as they tried to get their kids to safety. Facial expressions were clear and distinct which conveyed the harm and trauma America and Catalina experienced in losing their moms. Moreover, Travis Lanham’s lettering in the flashback added to the visual tension and atmosphere between panels, especially in the scene where young America and Catalina were separated.

It’s still unclear why America’s powers are glitching, and if there’s an actual solution to it. I was hoping it’d be addressed in this issue. Additionally, I noticed how there seemed to only be one type of female body represented in issue #4. From adult women to little girls, most bodies are illustrated as only slim and slender. Personally, I found that a little troubling and hard to ignore. There’s one issue left in America Chavez: Made in the USA, and some important questions remain unanswered. In other words, the pacing of the story so far feels a little bit uneven. Will Catalina and America reconnect? Will the Santana family learn about America’s past too? Is there a solution to America’s unstable powers? I’m certainly curious to know how this run will end!