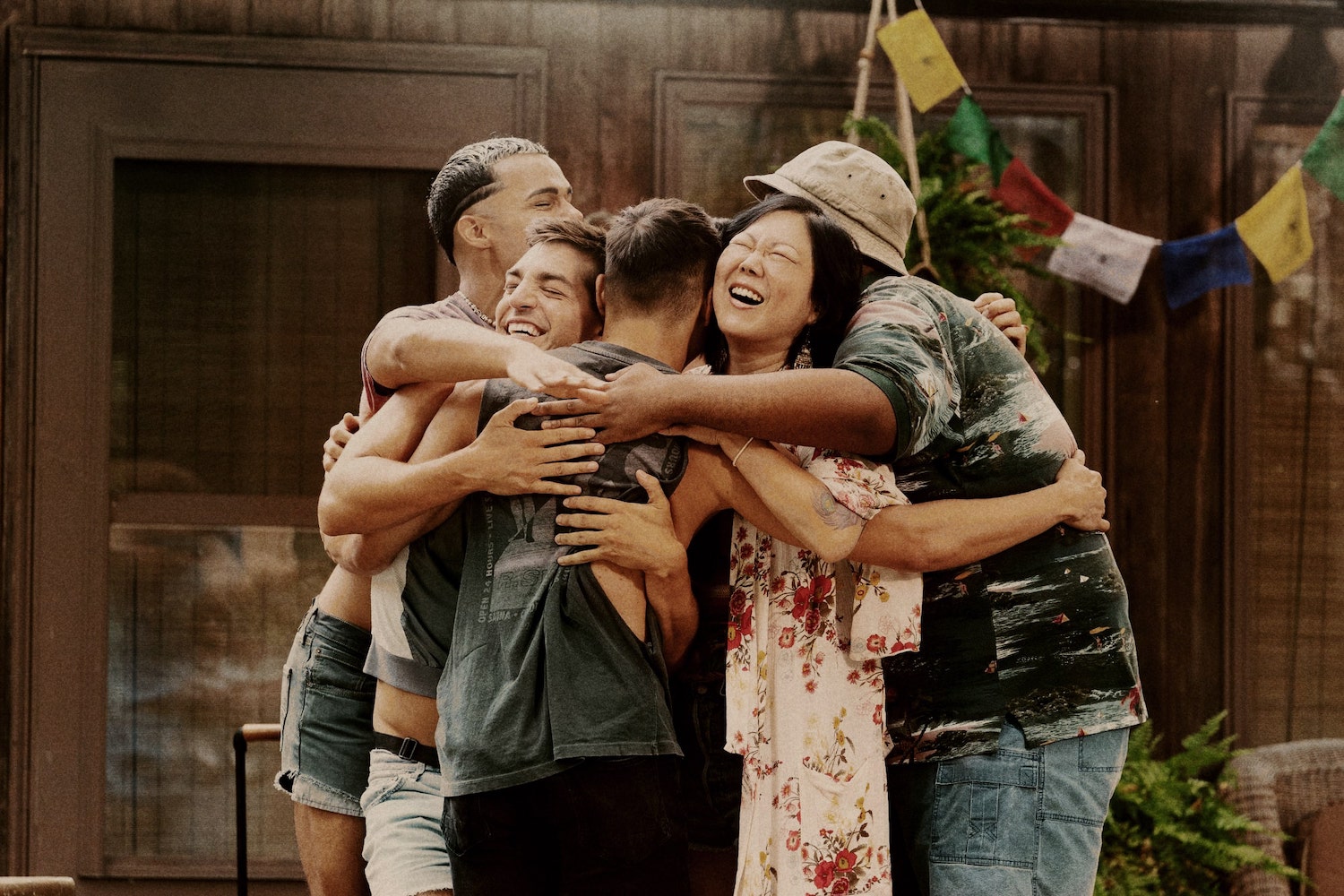 For over a year now, I’ve been really craving a fun, sexy queer rom-com, and that’s exactly what Hulu’s Fire Island is. This modern retelling of Pride and Prejudice is the movie I’ve been waiting for. From Searchlight Pictures, Fire Island is a movie made for the queer community and explores the oppression that can happen within it. This movie is sexy, smart, and overall a fun experience. It’s is a perfect movie for your Pride Month watchlist. I know I will be watching it multiple times!

The film stars Joel Kim Booster (Noah), who also wrote the screenplay, Bowen Yang (Howie), Matt Rogers (Luke), Tomás Matos (Keegan), Torian Miller (Max), and Margaret Cho (Erin) as a group of friends who go to Fire Island every year. Directed by Andrew Ahn, this movie explores their relationships as they stay at Erin’s house on what may just be their last trip.

Fire Island is so fun and joyous, while also having a lot of social commentary that is handled well. The film is a rom-com so there are some tropey moments, yet I found that it really drew me in and surprised me a lot. It was so empowering seeing this film center Queer Asian American men and their takes on love and life. The intersection of being Asian American within the queer community is explored, as are issues like racism and classism. This movie highlights that even within the gay community there is still a hierarchy. Huge credit to Joel Kim Booster for his screenplay and the complex characters who are introduced to in this film.

The writing in Fire Island is very well done. There are so many gay jokes that had me crying, and it has so much heart that I laughed so much. I really felt like this movie is made for me and I am so happy it exists.

This movie explores two romance stories, which I found unique! One of them is Howie and Charlie (James Scully), who are so adorable together. Howie is an insecure romantic who has yet to be in a relationship, and he meets Charlie, who is completely smitten with him. He likes Howie for all of his quirks. Howie and Charlie spend time just talking and hanging out, and it’s very sweet.

Noah is more jaded with dating and doesn’t want to be monogamous, and his goal from the beginning is literally just to get Howie laid. It’s amazing to have two Asian American queer characters who have very different perspectives on dating, and both are treated as valid. I really enjoyed seeing their relationships play out.

I connected with both Noah and Howie so much, and on any given day I’ll say a different member of the main cast is my favorite, which is a testament to the range of varying personalities and experiences reflected in the film. What I really love about Noah is his sarcasm and personality. Joel Kim Booster is just a fierce presence throughout the entire movie. Then the film introduces Will (Conrad Ricamora), who both repels yet attracts Noah. They butt heads a lot, yet they are forced to be around each other throughout the film. Their chemistry is insane. For a while, Noah is just letting Will have it no matter what he does or says, and their banter is captivating. In one scene, Will just gives up the argument, saying “Fine. You win,” and they just stare at one another. I wanted to scream.

Ricamora delivers one of the best performances in the entire movie, as we get to see so many sides of his character. Will seems a bit uptight at first, awkward at times, yet vulnerable and adorable. Only Conrad Ricamora could make eating ice cream so cute, and then he has some thirst shots as well!? He gets to do it all in this movie! Ricamora even has a scene in the rain together with Booster, as well as a great dance sequence that I’m hoping the queer community immortalizes online.

My last and favorite thing about this movie is that it’s very gay. Found family is a big theme, which is huge within the community. It is so nice to feel normalized and seen throughout the course of the movie, and I related to so many of these characters, whereas I usually can only relate to one aspect of a character in movies and TV. Fire Island is not a movie about queer people for straight people, but a queer movie for queer people. It is about queer joy.

I wish Max (Torian Miller) had more to do in the plot, as I really love his performance and his character. Max is mostly used as comic relief, but Miller is great in his role and deserved a larger presence. Similarly, Keegan (Tomás Matos) is underutilized. Both characters are really funny in the movie, but don’t get as much to do as I would have hoped for with our few queer Black and Latine characters. It would be great to see a sequel that focuses on the two and what their relationships looks like!

I would also have loved to see more from the main romances in the movie, since their relationships are a little up in the air until the end. Because of the tropes of,” Will they or won’t they?”, or friends having an argument in the middle of the film, it feels a little predictable in some parts. More focus on the actual romance would have been great because everyone has such amazing chemistry!

This movie has a lot of diverse talent attached and weaves in commentary of being Asian American in the queer community. Director Andrew Ahn has talked about how it was important for them not to sugar coat these things within the queer community, and to also include hope. So while we get these very offensive moments, the movie is still fun and almost a fantasy for queer people. For example they will experience a microaggression, but then Noah snaps back with jokes and sarcasm. In one scene, Noah, Howie and the rest of the group show up to party at the mansion where Charlie is staying, and are immediately greeted like they don’t belong. Cooper (Nick Adams) is antagonistic to the group throughout, and is obsessed with status. The script does an amazing job showcasing moments that are so offensive, but then includes a comedic beat quickly to maintain the comedic tone.

Margaret Cho’s character Erin is also another standout performance. She is the “mother hen of the group” as the comedy legend puts it, and she’s a queer elder figure helping these characters navigate their problems, and sharing her own hilarious experiences. She is also a very vulnerable character and the movie would truly not be the same without her magnetic presence. She is so much fun to watch on screen.

Fire Island features an amazingly talented queer POC cast, which is so meaningful. I know that there will be young queer people who see this film, and it will mean so much to them to feel seen in a world where that’s not always easy for us.