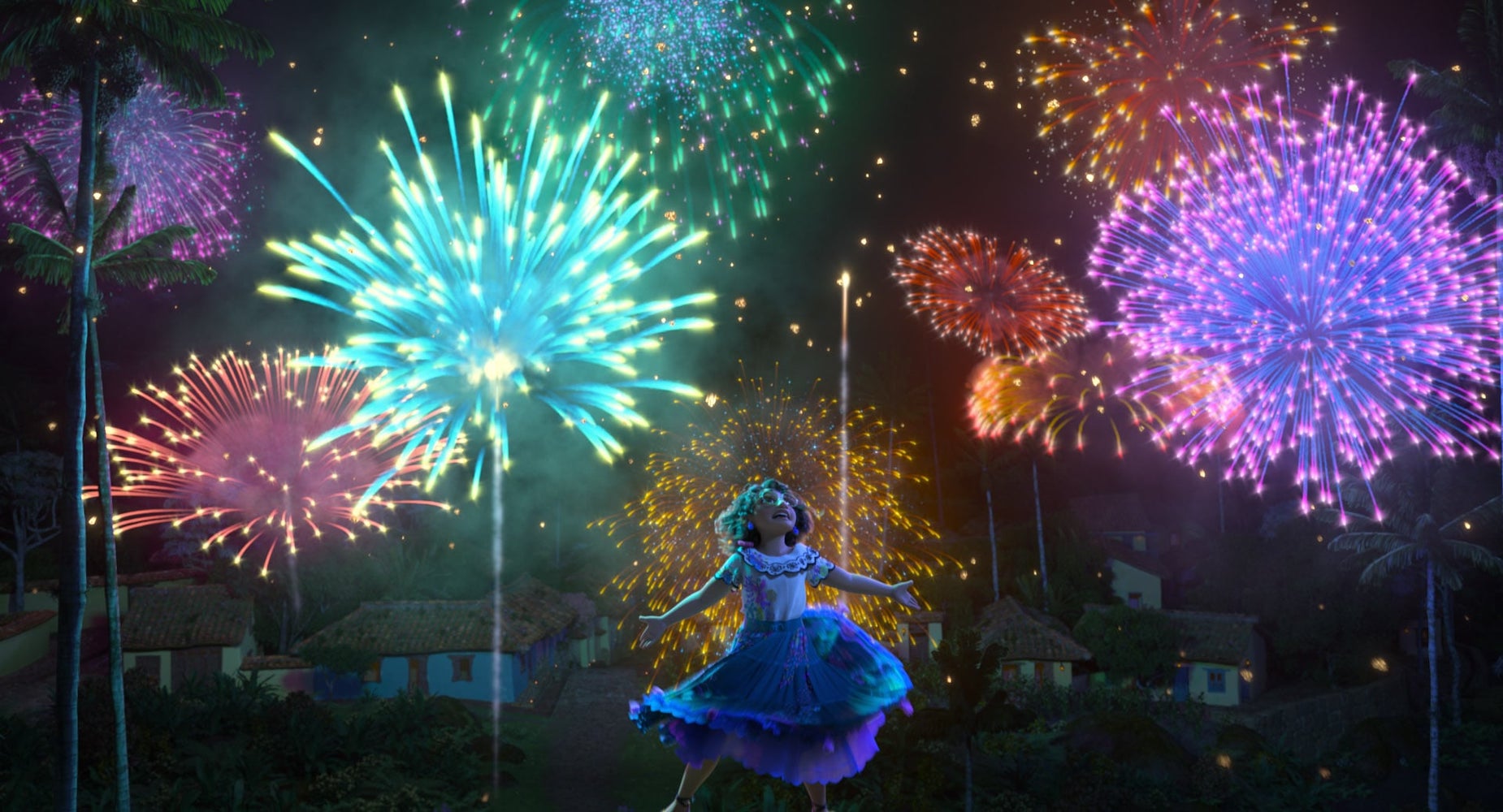 It’s hard to make a kid friendly feature film that’s both entertaining for kids but fresh for adults as well. Luckily, Disney’s Encanto has something for everyone, and it breaks through with flying colors—literally.

Right away we’re thrown into a visually rich, lush world of Hispanic/Latinx/Indigenous influences, colors and design, and are introduced to the large and vibrant Madrigal family. A multi-generational family under one roof (“the Encanto,” itself a magical abode), the Madrigals and their bestowed “gifts” are the cornerstone of their Colombian town. Abuela (María Cecilia Botero) is the matriarch of the family, which includes the family’s stars: super strong Luisa (Jessica Darrow); nature-powered Isabela; animal-whispering Antonio (Ravi Cabot-Conyers) and Dolores (Adassa) with her super-hearing. There’s also Camilo (Rhenzy Feliz), Pepa (Carolina Gaitan), Bruno (John Leguizamo), Agustin (Wilmer Valderrama), Julieta (Angie Cepeda) and Mirabel (Stephanie Beatriz) — all with their own gifts — except Mirabel.

A peppy, ever-helpful, curly-haired brown girl with glasses, Mirabel is a beacon of joy and support for her family and friends. But we quickly come to find out that in a world surrounded by “gifted” people, being normal can be a cruel and isolating feeling, and Mirabel is still haunted by her failed Rite of Passage earlier in life. Secretly, her family holds it against her too.

Fast forward to the heart and soul of Encanto – Disney takes us on a journey of self, where Mirabel and the Madrigals have to reconcile their pasts, face their futures and find peace within themselves and each other. Off the bat, we’re pulled in to the film with Lin Manuel Miranda’s catchy and humorous lyrics over traditional Latin grooves (further spiced with modern pop cues). Some of the tracks are pure ear-candy (“We Don’t Talk About Bruno”) paired with impressive dance sequences, while others are more function-over-form, but all of them hit the right beats.

Speaking of which, when the movie started with such a rapid pace, I was worried we were going to rush through all the acts, but the pacing was just right. Somehow, Disney found a way to explore the entire Madrigal clan without slowing down or rushing through anything. As a family film, Encanto gives kids a new and vibrant world to explore with an instantly lovable cast of characters; it also gives adults something refreshing to venture into as well. As the film moves into its second and third acts and delves into darker themes of repression, self love and guilt, it becomes more than just the glitz and glamor of the stunning graphics and designs, and moving music. It’s a heartfelt movie through and through.

Additionally, Encanto represents its cultural anecdotes and details well—the language Mirabel and others sprinkle in, the foods they eat, and the architecture around them, are all saturated with authenticity. And by the end of the movie, Mirabel doesn’t just become the hero the Encanto and the Madrigals need, but one young girls (and boys) of color can relate and look up to.

Encanto isn’t without its pitfalls though. In striving to hit all the beats, it can veer towards the predictable at times. And as the movie rolled towards its final half hour (and after the plot twist is unraveled), I had this feeling that we’d already past the peak of our central conflict. With a family full of super-powered beings, the lack of a singular villain (like Hans Frozen or Dr. Facilier in The Princess and the Frog) did make the last act feel unearned for half the cast, and a tad unsatisfying for the others—although it was, by-the-book, a good conclusion.

But, once again, Disney worked its signature magic with Encanto: Mirabel Madrigal could be a heroine for the ages to come. Encanto is the best family movie of the year so far.