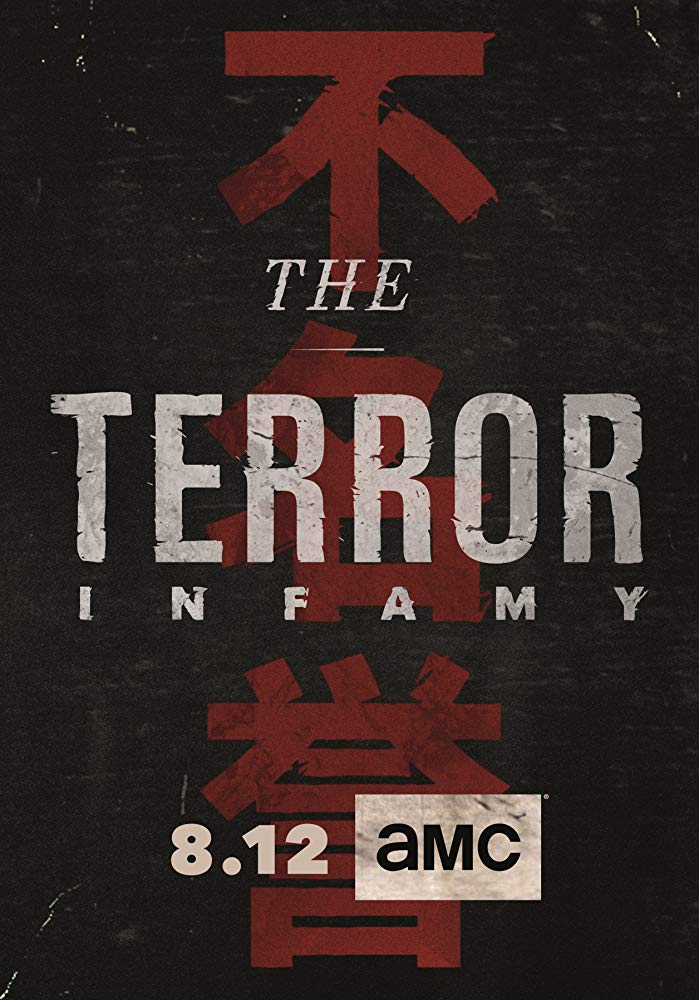 The best way for me to start this review of AMC’s The Terror: Infamy is to strongly recommend that you read The Los Angeles Times’ Jen Yamato’s very personal piece on the show. Yamato’s conversations with the cast, many of whom have direct personal or familial experiences with the Japanese internment in 1942, reflect the deeply emotional ties this season shares with the Japanese-American community. Indeed, Yamato herself had family members who were detained and endured the traumatic experiences that continued to impact the lives of her family and that of thousands of other Japanese-Americans (reportedly there were approximately 120,000 Japanese-Americans detained during this period).

Of course, the timing of this show couldn’t be more appropriate given the current state of affairs in the United States. Indeed, as Yamato notes in her piece, just a few months ago, a group of Japanese-Americans gathered at Ft. Sill, OK to protest plans to transport thousands of migrant children to the location. It’s difficult to watch The Terror: Infamy because we know it’s based on true events. It’s even more difficult with the knowledge of what this country is doing to those migrant children right at this moment in time, and it’s intellectually dishonest to write any kind of review without that acknowledgment. It hurt me to watch this show like it hurt me to watch Ava DuVernay’s incredibly powerful When They See Us.

A common theme on social media is that “representation matters.” I started this site on the belief that representation in media is critically important to social change. Looking back on the numerous groundbreaking shows focused on Asians and Asian-Americans over the last couple of years, there are so many wonderful highlights. I’d venture to say however that The Terror: Infamy might be the most important. Not only because the show features numerous Asian creatives behind the camera (including Alexander Woo as the Showrunner, and numerous Japanese directors and writers who worked on the show), and an overwhelmingly Japanese-American/Japanese-Canadian cast, but also because the show brings to light an important part of United States history that has been largely ignored or overlooked.

I had a chance to preview several episodes of The Terror: Infamy and I was completely blown away. The show is beautifully written with layered dialogue that truly gets to the core of the immigrant experience, it’s powerfully acted with a weight that reflects how important this project was to everyone involved, and it’s satisfyingly creepy in a way that makes you want to cover your eyes…but you can’t. Mild spoilers below!

George Takei – George Takei is a pop culture legend. It’s almost easy to take for granted that as Lieutenant Hikaru Sulu, Takei was cast as a major character on an iconic TV show in 1965. Asians are still fighting for representation in U.S. media now and Takei was cast on Star Trek over 40 years ago. That’s incredible. Now, at 82 years young, I’m so thankful that Takei was a part of The Terror: Infamy. In an interview with Phil Yu and Jeff Yang on their podcast They Call Us Bruce, Showrunner Alexander Woo mentioned that co-creator Max Borenstein first came up with the concept for the show when he heard Takei speak about Japanese internment 20 years ago. Takei and his family experienced that trauma first-hand, and every time he’s on screen there’s an emotional impact that can’t be faked.

The Diaspora Experience – The dialogue is so well written on this show. There are so many layered conversations where a simple comment carries with it many levels of meaning and emotion. The show does a great job of presenting the generation gap, the culture gap, the age gap and so many other challenges that immigrant families, and especially the children of immigrant families who are born in the United States, face. In one of the early episodes, Chester Nakayama (the lead character played by Derek Mio) demands that his father (Asako Nakayama played by Naoko Mori) “be a man.” I actively cringed and possibly ducked under a pillow during that scene. Although I’m not Japanese, I’m very well aware of what respect and honor mean in Asian cultures, particularly when it comes to father-son relationships. And yet, I also know first-hand how it can feel as an Asian-American growing up not fully understanding the motivations and actions of your immigrant parents. That scene alone is powerful and authentic, and it’s really just one of numerous moments that make each episode ring so true.

The Drama and Horror – I realize that I’m half way through this review and I’ve barely mentioned the horror aspect of the show. Rest assured, there is definitely a fantastical horror element throughout each episode. The very first scene in the first episode makes it clear that this isn’t some historical drama. It’s notable though that The Terror: Infamy is just as much about human evil as it is supernatural evil. I’m not sure I was as scared about the supernatural elements as I was every time a U.S. soldier showed up on screen. If anything, I almost wanted the supernatural parts to show up more often to alleviate some of the powerlessness that the Japanese-Americans were facing against the U.S. soldiers. Although the supernatural evil is personified, don’t go into the show expecting It or anything like that. It’s more of a constant feeling of unease and creepiness that pervades each episode. Keep in mind too that I haven’t yet watched the full season, so we’ll see how that element plays out on the back end.

More Horror? – This isn’t really a criticism that I feel personally, but I’m a bit concerned that the show might not have enough of the supernatural element for viewers expecting a straight horror show. Again, there is horror, and it’s definitely creepy, but I can’t say it’s really scary. This isn’t American Horror Story or The Exorcist (admittedly I haven’t watched either of those shows, but based on my cursory knowledge of both, I believe they are significantly different in tone from The Terror: Infamy). The show could have stood on its own as a historical drama, though I think it would have been more easily overlooked in pop culture if they had gone with that approach.

Watch this show for so many reasons. Watch it to support the numerous Asian creatives in front of the camera and behind the camera. Watch it to get a better understanding of the immigrant and diaspora experiences that so many here in the United States go through. Watch it for great writing, great acting and great cinematography.

But most of all, watch it because it’s the first main stream show focused on the story of Japanese internment in the United States. On a personal level, I’m an Asian-American who grew up in Southern California. I even went to school near a city which hosted one of the major mass incarceration sites. Yet I’m sad to say that I know very little of the details regarding Japanese internment during World War II. Growing up, everyone around me just knew it happened generally and that it happened at that location nearby. It’s shameful that I know so little about what happened. That’s why shows like this are so important. That’s why representation matters. Just watch it.

In this article:The Terror, TheTerror