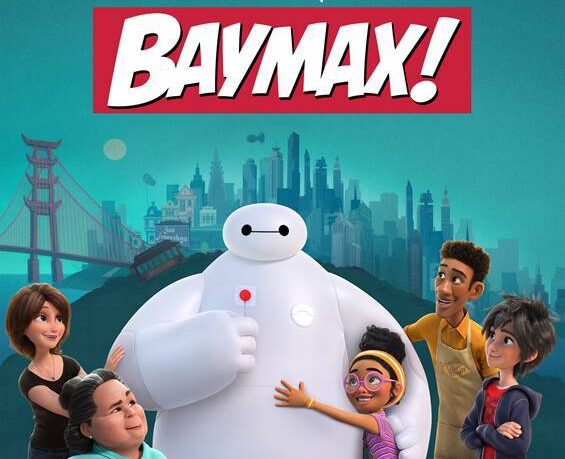 Baymax is one of the sweetest, funniest and most beloved characters in Disney, but the Big Hero 6 franchise has been a bit overlooked in recent years. Big Hero 6, which premiered in 2014, might have been a little too early for its time and it’s a film that I think would be even more celebrated if it was released today.

Hopefully, with the release of this 6-episode series, fans of the franchise will not only get to revisit the wonderful city of San Fransokyo, but new audiences will be introduced to the film as well.

The trailer released today is so joyful and agonizingly hilarious as Baymax tries to help random citizens as their personal health companion. Scott Adsit returns as the voice of Baymax, and the cast also includes Ryan Potter, Maya Rudolph, Emily Kuroda, Lilimar, Zeno Robinson and Jaboukie Young-White. As evidenced by the incredible cast, this series (and the original film), is beautifully diverse.

Check out the trailer above, as well as stills and additional details below. Baymax! premieres June 29th exclusively on Disney+

In celebration of National Streaming Day, Disney+ has released a new trailer and key art for Walt Disney Animation Studios’ “Baymax!” Streaming exclusively on Disney+ on June 29, the all-new series of healthcare capers returns to the fantastical city of San Fransokyo where the affable, inflatable, inimitable healthcare companion robot, Baymax, sets out to do what he was programmed to do: help others. “I thought it would be fun to do a Disney+ series with Baymax interacting with normal folks,” said series creator Don Hall, who helmed 2014’s Oscar®-winning film “Big Hero 6.” “In each of our six episodes, Baymax just wants to help someone—and a lot of times they don’t want to be helped. He sets out to fix a physical issue that he’s identified, and in the process, gets to a deeper, more emotional place and can be almost transformative in that role.”