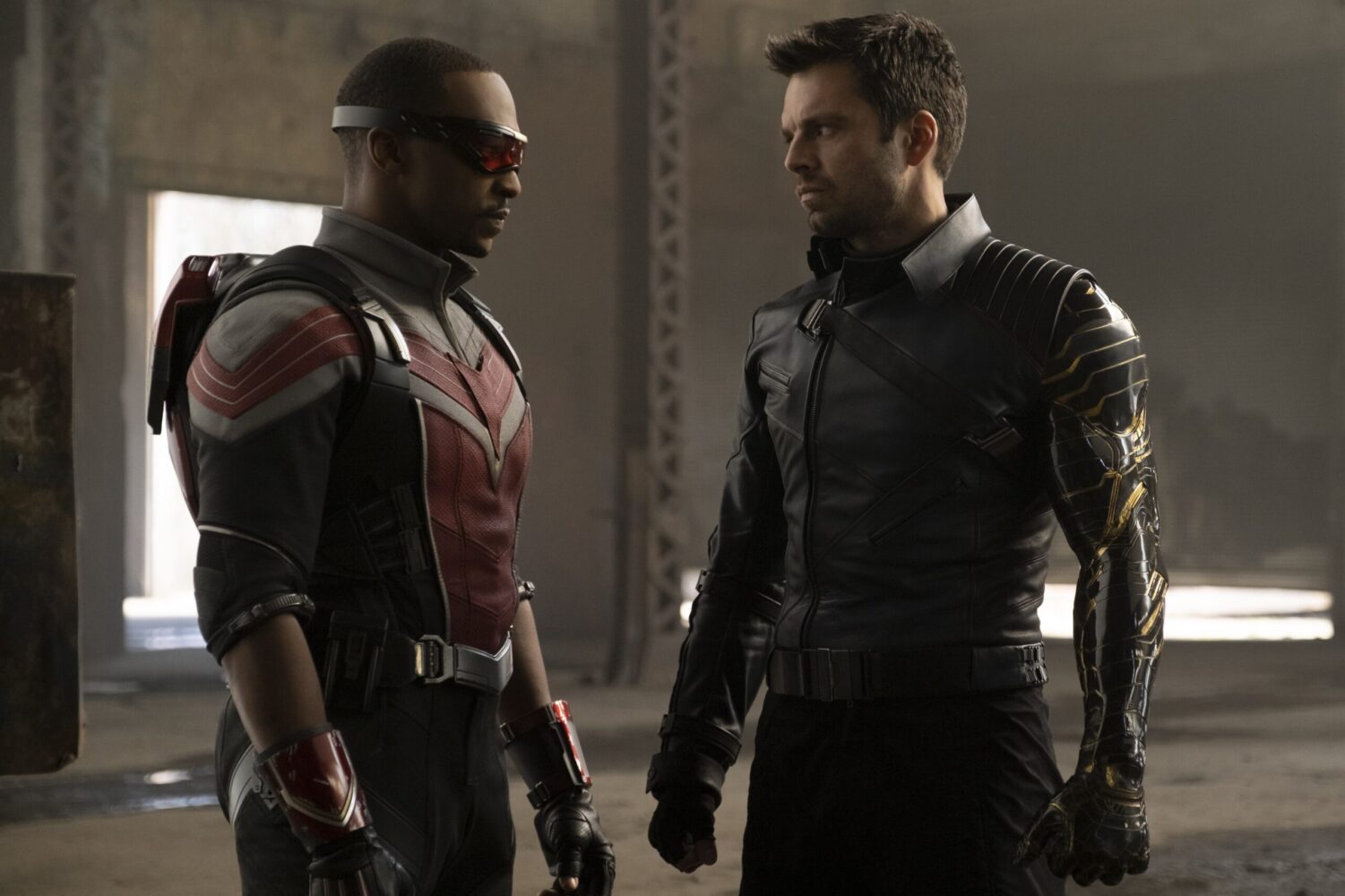 The entire concept of The Falcon and the Winter Soldier is borne from one of the most memorable moments in the Marvel Cinematic Universe – the moment in Captain America: Civil War when Sam Wilson (Anthony Mackie) and Buck Barnes (Sebastian Stan), are squished in the backseat of a beat up car while Sharon Carter (Emily VanCamp) and Steve Rogers (Chris Evans) share an intimate moment.

A lot has happened, both in universe and in the real world, since that film was released in 2016. Of course, for Wilson and Barnes, the two characters went through the apocalyptic events of 2019’s Avengers: Endgame, which ended with Rogers passing the torch to his two best friends. The Falcon and the Winter Soldier picks up about six months after the events of Endgame, and our titular heroes are left with the harsh reality of going back to the real world. In the words of Lin Manuel Miranda’s Hamilton, “dying is easy, living is harder.”

At the global press conference for The Falcon and the Winter Soldier, Anthony Mackie and Sebastian Stan talked about their relationship, on and off screen, and how the show depicts both characters evolving.

“The idea of Sam Wilson, he’s always evolved in the world of Marvel comic books, and now he’s evolved in the Marvel Cinematic Universe. Because if you remember, when Sam Wilson started out, he was a hustler from Harlem. Then as African-American culture evolved, Stan Lee evolved him in the comic book into different incarnations of himself. So I’m excited to see the new and improved Sam Wilson,” Mackie said.

Mackie’s Falcon has come a long way since Rogers was jogging circles around him with a mocking “On your left!” At the same time, while Rogers did entrust Wilson with the shield at the end of Endgame, it’s not clear that Wilson is ready for that. This show will likely explore Wilson’s struggle with embracing that mantle.

“The idea of Sam Wilson, and the character and the evolution of what’s now known as The Falcon, to be able to go back and dive into his backstory, and his family, and his surroundings, only betters the character for the audience,” Mackie said. “Especially since Kevin [Feige] finally killed Iron Man [laughing], we have to put ourselves in position where we have to introduce these new characters to the audience, and give them that relationship, that history that they’ve built over 10 years. We now have six episodes to play catch-up.”

Part of that backstory is establishing that the MCU version of Wilson is from New Orleans, Louisiana, where Mackie himself is from. “When I first read the script, I was really happy and acknowledged the fact that he was from Louisiana, ’cause that’s the best state in the union and New Orleans is the best city in the world!” Mackie said. “I had one request that, if he was from Louisiana, I had to eat crawfish on-camera and I don’t know who said no, but somebody said no [laughing].”

From Sebastian Stan’s perspective, the changes in Bucky came hand in hand with his own growth with the character. “I always learn something about myself from this character. I’ve spent ten years with this character, you know? You grow and you evolve with the character,” Stan said. Part of that growth for Bucky is accepting his past and adjusting for the present. “We’re really finally kind of zooming in on his quest for identity, and in terms of really accepting his past and re‑educating himself about the world that he’s currently in,” Stan said. “The ideals and principles he might’ve lived by and been driven by at one point that perhaps no longer really serve him the same way.”

The key to any buddy show is the chemistry and relationship between the two leads, and both Mackie and Stan lauded their friendship and mutual respect for each other. “I think the great thing about it is, or what I enjoy so much, you can’t find two people further opposite than each other than Sebastian and I,” Mackie said. “But there’s a mutual respect, understanding, appreciation of that person. We listen, learn, and teach each other a great deal. We allow ourselves to be our best selves and we correct ourselves when we’re not our best selves.”

The relationship carries over on to the screen and is reflected in Sam and Bucky’s friendship. “They’re are in some similar places at the start of the show. Because Steve’s missing and kind of, you know, the consequences of that. And it’s sort of thrown them both into almost opposite corners, right?” Stan said. “In terms of facing their lives, their demons, their questions. And they’ve got different things that they’re facing, but they’re definitely in a similar place in terms of questions they’re asking, I believe.”

Sam and Bucky are not only brought together by the mutual connection with Steve Rogers, but they’ve also experienced some of the most traumatic, life-changing events in human history. Few others can empathize with what they’ve gone through and what it means, as superheroes, to continue forward.

“The whole subject of PTSD and the experience that they both share as soldiers, as men who have served, right? Is one of the things that brings them together. And there’s sort of an honor code between them. Even though they come from different ideas or opinions about things, there’s a mutual respect,” Stan said.

Avengers: Endgame looms large, not just over the characters the show, but for the cast and crew making The Falcon and the Winter Soldier as well. Considering it was arguably the biggest cinematic event in recent history, the shows and films that come after it have a heavy burden to continue that legacy. “Endgame was a monumental shift of the superhero universe.  The scope of that movie, the idea of that film, is something larger than I think anyone imagined,” Mackie said. “So, you know, our goal, and we’ve talked about this…I speak for Sebastian, was not to mess it up. So we didn’t wanna be the first crappy Marvel project.”

While I can confirm from my review of the first episode that they succeeded in their goal, what’s most important is that the cast and crew recognized their accomplishment.

“Our job was to take the torch and not make a bad show. And I’m very happy to say that Steve Rogers will be proud that our show does not suck,” Mackie said.

The Falcon and the Winter Soldier premieres exclusively on Disney+ on March 19th!

Cindy Moon is finally back with her very own series. Moon’s last solo title ended in 2017, and since then she’s appeared in various...