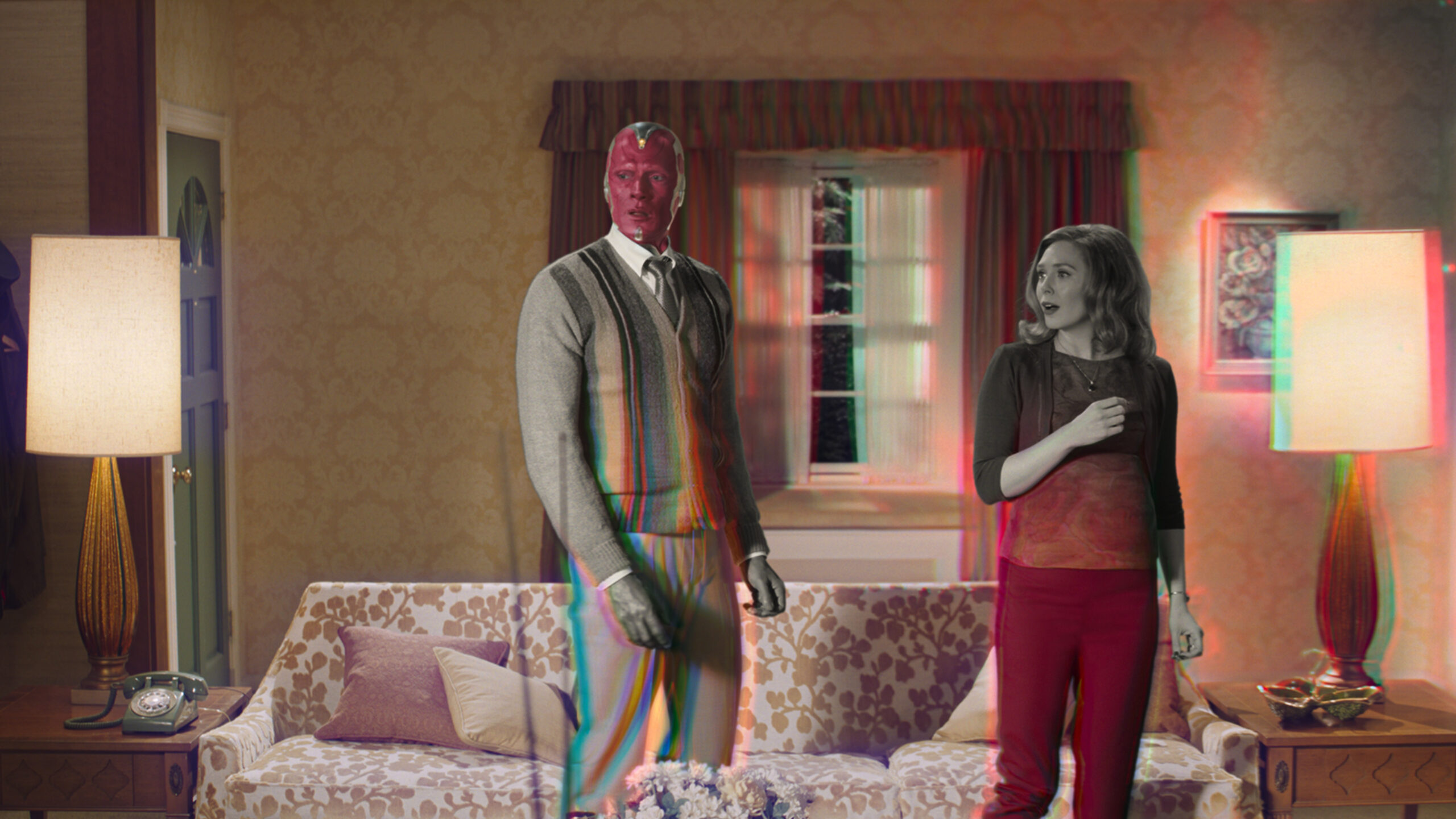 The Marvel Cinematic Universe is finally set to make its triumphant return after an unexpected 18+ month long hiatus with its first Disney+ series, WandaVision. The last MCU film, Spider-Man: Far From Home, premiered on July 2, 2019, officially capping “Phase 3” and leaving Marvel Studios with a virtual blank slate in terms of what to do next. Of course, while the plan was always to take a break after the epic events of Avengers: Endgame, the official kick-off of “Phase 4” took longer than expected to arrive.

Thankfully, Phase 4 is finally here, as WandaVision premieres on Disney+ this Friday, January 15th. At the global WandaVision press conference, which took place Sunday, January 10th, the cast and crew behind the show talked about its creative influences, the unique vision for the show, and its place within the larger Marvel Cinematic Universe.

Speaking at the press conference were the WandaVision show’s stars, Elizabeth Olsen and Paul Bettany, who play Wanda Maximoff and Vision respectively. They were joined by Teyonah Parris, who plays Monica Rambeau, and Kathryn Hahn, who plays the neighborly Agnes. Finally, the panel was rounded out by the creative minds behind the show, head writer and showrunner Jac Schaeffer, director of all 9 episodes Matt Shakman, and Marvel Studios President Kevin Feige.

Kevin Feige on WandaVision‘s place in the Marvel Cinematic Universe

WandaVision has the honored distinction of being Marvel Studios’ first Disney+ show, and in discussing the show from a macro perspective, Feige explained that the goal was to push boundaries. “This was Marvel Studios’ first foray, directly with cast and amazing characters that we’d seen in movies, coming onto television,” Feige said. “The idea was to do something that could not be done as a feature; that plays with the format and plays with the medium.”

Being that the show is also the official start of the next phase in the Marvel Cinematic Universe, Feige described the show as continuing the innovative storytelling that’s become the hallmark of Marvel Studios. “I hope it says, get ready for the new and the different and I hope all of our movies have said that, one after the other, over the years,” Feige said. “But certainly with the Disney+ opportunities, it has allowed us to expand creatively what we do.”

Originally, the plan was to have another Marvel Studios show, The Falcon and the Winter Soldier, be the first MCU Disney+ show. While the production schedules had to be reshuffled due to the pandemic, it seems that WandaVision might be the perfect show to start with. “The unexpected has often served Marvel Studios well. It has served us well in this case because this show being our first one, I love how bold it is,” Feige explained. “I love how different it is, and as I said before, it is something you could only see on Disney+.”

Turning to the development of WandaVision Season 1, Matt Shakman, who directed all 9 episodes, talked about the challenge of creating a show that draws from various inspirations across multiple decades:

“We wanted to be as authentic as possible. That was one of the biggest goals, and so production design, cinematography, costuming, everything was about going on this deep dive, And with the actors, we all wanted to do the same thing, so we watched just a ton of old television episodes, talked about how comedy changes, because it really does. The approach to comedy in the 50s, 60s, 70s is really different….So we also worked with a fabulous dialect coach to talk, to work on how the people would sound in that era, how they would move. We just did everything we could to make it as authentic as possible.”

Starting in the 50s and 60s, iconic sitcoms like I Love Lucy and The Dick Van Dyke Show were major inspirations for WandaVision episodes. So much so that Shakman and Feige went right to the source, meeting with Dick Van Dyke to pick his brain about what made his show resonate. “He said if it couldn’t happen in real life, it can’t happen on the show,” Shakman explained. “If you’re drawing something that’s grounded and it’s real and it’s resonating with everyone’s experience at home, you can do crazy things….but as long as it’s grounded in real life, that makes it work.”

Wanda Maximoff and Vision are one of the most iconic superhero couples in Marvel comics lore. For head writer and showrunner Jac Schaeffer, the two titular characters are so special because of their unique relationship. “I think that Wanda and Vision are really, as a couple, a fan favorite because their love story has been so very tragic, but also really kind of warm and intimate,” Schaeffer sad. “We’ve seen them in these really beautiful kind of stolen moments in the MCU. It’s actually been a small amount of screen time, but very powerful and very soulful.”

While the previous Marvel Studios films gave us brief glimpses of Wanda and Vision’s relationship, there wasn’t much opportunity to fully explore their identity as a couple. Fortunately, the format of a 9-episode Disney+ show allowed them to further explore those story elements. “What we have with WandaVision, which is really I think a treat for all, is we’re sort of opening up the stage and the space for them, and they’re in this domestic sphere,” Schaeffer said. “We get to see them doing dishes, and in the kitchen, and being cute, and just all the sort of homebody stuff that you would never get to see a superhero participate in.”

Elizabeth Olsen, Paul Bettany, Teyonah Parris and Kathryn Hahn describe their preparation and the state of their characters in WandaVision

The last time we saw our favorite couple, Wanda and Vision, together on screen, things didn’t go very well for them. At the end of Avengers: Infinity War, Thanos snatched away a seeming victory from Wanda just after Vision was destroyed. When we finally reconnect with the couple in WandaVision, everything is very different.

Away from the apocalyptic battles of the films, WandaVision shows the two characters just trying to fit in. “I believe from Wanda’s point of view she would describe WandaVision as a family sitcom of two people trying to fit in, and not be discovered for being different,” Olsen said.

The Wanda and Vision we meet on the show aren’t trying to be superheroes. They’re just trying to be average sitcom citizens. Olsen and Bettany drew inspiration from sitcom legends in preparing for their respective characters on the show. “I think it was like an amalgamation of Mary Tyler Moore and Elizabeth Montgomery, and I think I accidentally threw in some Lucy in the 70s just because there was so much physical comedy,” Olsen said.

For Bettany, it was initially challenging to figure out what this strange new version of Vision was supposed to be like. However, he realized that the hallmark of his character was his adaptability. “I realized he’s always been becoming something else, you know. He’s Jarvis, he’s part Ultron, he’s part Tony Stark,” Bettany said. “He’s omnipotent but he’s also this sort of naive ingenue. Then I realized I’ll just throw a little bit of Dick Van Dyke in there and a little bit of Hugh Laurie.”

As the setting of WandaVision changes, so does the physical acting and the comedy of the characters. “I think there is a lot more slapstick and physical comedy early on,” Bettany said. “Luckily by the time we get to the 90s, they’ve all made me look so ridiculous that I didn’t really have to work that hard for the laughs,”

In particular for Wanda, Olsen described the ways that her movement, appearance and speech evolved:

“The way women move throughout the decades changes so much when it comes to what society wants from them. And so Jac did write in quite a few nods to how those were evolving through the decades. In the 60s [Wanda] gets to wear some pants and that would adjust how someone moves through space, and manners were a big part. When we talk about vocal work and speech and cadence, manners were a huge part of every decade.”

In addition to Wanda and Vision, the show introduces a quirky neighbor, Agnes, played by Kathryn Hahn, and re-introduces Monica Rambeau, played by Teyonah Parris. According to Hahn, there was a balance in incorporating the sitcom inspirations into the show. “I feel like what the sitcom has always represented is this kind of like aspirational view, this kind of comfortable like ideal,” Hahn said. “The trick was to not satirize it, but to kind of like get inside of each one; that’s what I think was tonally such a trick to pull off.”

Teyonah Parris’ Rambeau, who in comics was the second Captain Marvel and is currently known as Spectrum, was first introduced as a little girl in the film Captain Marvel. She is now an adult in WandaVision and Parris explained that her character has “definitely been through some things and seen some things…we actually do get to learn particularly what those things are that Monica has seen and gone through and how they have shaped her life.”

Perhaps just as interestingly, Parris was able to briefly mention the larger role that her character will play in the future of the Marvel Cinematic Universe. “We will get to see Monica join Carol Danvers, Captain Marvel and Miss Marvel in Captain Marvel 2,” Parris said.

WandaVision presents a boldly unique and exciting new chapter in the MCU, and it’s clear from every member of the creative team that spoke about the show that it, along with the other Disney+ shows, will stand shoulder to shoulder with the feature films in the franchise. “We want to make people understand these projects on Disney+ are as important as the projects going into theaters, and we want to feel that same excitement,” Feige said.