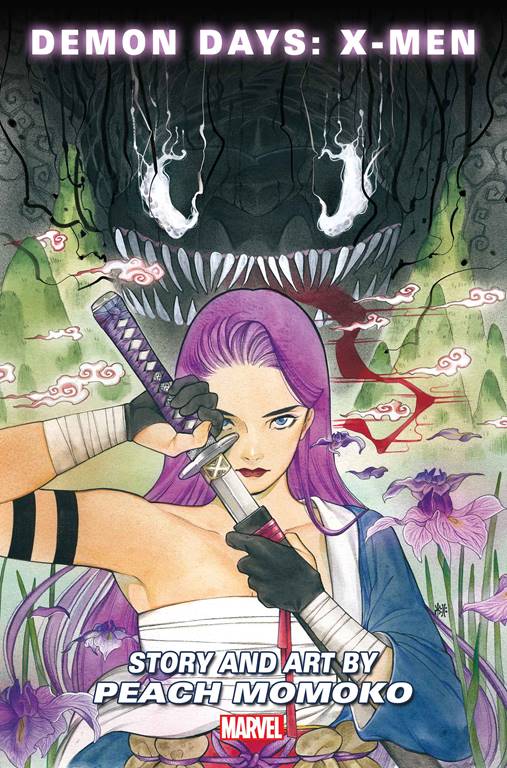 March 2021 is gearing up to be a big month for Marvel Comics. It seems like a number of new books recently announced are slated to debut in March. Today, Marvel added to that impressive list of releases with Demon Days: X-Men, a new prestige miniseries written and drawn by superstar artist Peach Momoko. This is Momoko’s Marvel comics writing and interior art debut and judging from the cover (insert don’t judge a book joke here), it looks amazing.

The book seems to highlight Psylocke (the Asian one) and she was always one of my favorite X-Men, so I’m excited to see her and the other X-Men handled by Momoko for this series. The story also seems to feature Venom (at this which stories don’t?) so that should be interesting as well.

Cover art and additional details below!

Peach Momoko presents her spectacular vision for the Marvel Universe starting this March!

New York, NY— December 18, 2020 — Recently announced as a member of the inaugural class of Marvel’s Stormbreakers, superstar artist Peach Momoko has taken the comic world by storm with her mega-popular variant covers. Now, Marvel Comics is proud to announce this elite artist will be making her Marvel Comics writing and interior art debut this March with DEMON DAYS: X-MEN!

DEMON DAYS: X-MEN will be the start of a five-part prestige series bringing to life characters like Wolverine, Psylocke, Venom, and more in Momoko’s one-of-a-kind style. Each issue of the series, released once every three months, will feature some of the most popular Marvel heroes, setting the stage for an all-new saga that will leave fans mesmerized.

The Demon Days Saga will kick off when a wandering swordswoman with a psychic blade arrives at village that’s being targeted by demons. One demon is black and white with a terrifying red tongue and another may be the strongest demon there is! Ready your katana and enter a mysterious world of demons, monsters, mutants, and magic in a stunning premiere issue that will present readers with a revolutionary reimagination of the Marvel Universe that could only come from Peach Momoko.

“A dream come true. Not only did Marvel offer me to do interiors, but to do everything myself and tell a Marvel story like no other. A ‘Momoko-verse’ was born,” Momoko told Marvel.com. “Because I love Yokai stories, horror, Japanese folktales, classic samurai tales… I wanted to tackle as much as possible using these concepts with Marvel characters and make something Marvel fans can still appreciate but also bring it in a fresh direction.”

Head over to Marvel.com now for a look at some stunning interior pages from DEMON DAYS: X-MEN along with an exclusive interview with Peach Momoko. And don’t miss book ONE of FIVE of the DEMON DAYS saga when it launches this March!