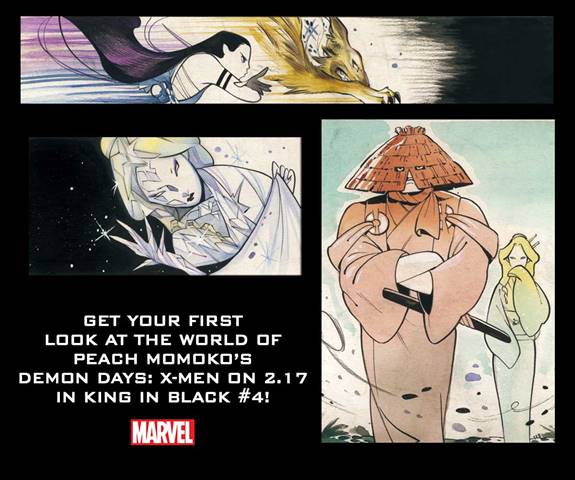 Marvel previously announced that superstar artist Peach Momoko will be making her Marvel Comics writing debut in March with Demon Days: X-Men #1. Today, Marvel announced that the first look at Momoko’s story will be via a six-page bonus story to be part of King in Black #4 in February.

Check out the fantastic teaser and additional details below.

Get an exclusive first look at the world of Peach Momoko’s Demon Days: X-Men!

New York, NY— January 6, 2021 — Today, Marvel is delighted to announce that fans can get their first look at Marvel Stormbreaker Peach Momoko’s all-new DEMON DAYS saga in a six-page bonus story in February’s KING IN BLACK #4! Announced last month, Momoko will be making her highly-anticipated Marvel Comics writing and interior art debut this March with DEMON DAYS: X-MEN #1, the first in a five-part prestige series.

The elite artist, known for her bestselling variant covers, will introduce readers to her mesmerizing vision of the Marvel Universe. This exciting new tale will feature the first appearances of Momoko’s reimagined takes on X-Men characters such as Psylocke, Emma Frost, and Juggernaut.

“A dream come true. Not only did Marvel offer me to do interiors, but to do everything myself and tell a Marvel story like no other. A ‘Momoko-verse’ was born,” Momoko told Marvel.com. “Because I love Yokai stories, horror, Japanese folktales, classic samurai tales… I wanted to tackle as much as possible using these concepts with Marvel characters and make something Marvel fans can still appreciate but also bring it in a fresh direction.”

Pick up KING IN BLACK #4 next month for this exclusive introduction to Momoko’s mysterious world of demons, monsters, mutants, and magic, and don’t miss book ONE of FIVE of the DEMON DAYS saga when it launches in March! For more information, visit Marvel.com.