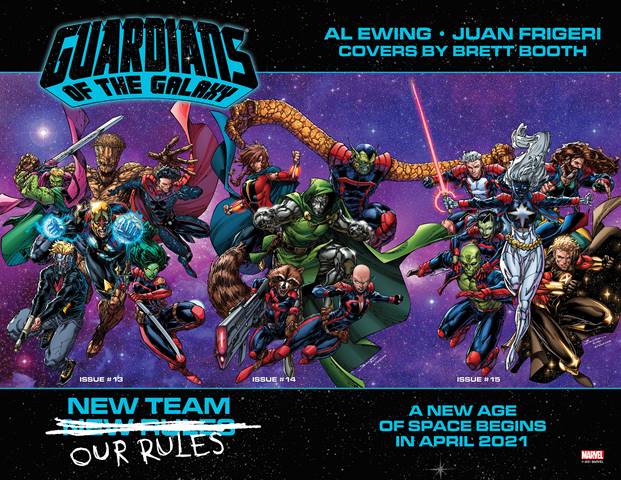 Al Ewing is writing Doctor Doom…and Star-Lord, and Gamora, and Rocket. Marvel teased earlier this week that a brand new and expanded Guardians of the Galaxy team would be revealed. Today, the full team was unveiled with Doctor Doom himself front and center!

I’m not sure how the good Doctor will be integrated into a team like the Guardians, but I’m definitely eager to find out. Check out the full inteconnecting covers by Brett Booth of the new squad below along with additional details. Al Ewing’s Guardians of the Galaxy run starts in April!

THE SHOCKING FINAL MEMBERS OF THE GUARDIANS OF THE GALAXY REVEALED!

New York, NY— February 11, 2021 — The Marvel Universe is in for a whole galaxy of trouble and help will come from some surprising new space heroes! Ushering in a brand new age of cosmic storytelling, Al Ewing will introduce a brand-new lineup of Guardians of the Galaxy in April’s double-sized 175th issue, GUARDIANS OF THE GALAXY #13. The team will consist of core members like Star-Lord, Rocket, and Gamora as well as some shocking new additions… DOCTOR DOOM and QUASAR!

The galaxy no longer needs heroes. It needs super heroes! Now deputized by the Galactic Council, the Guardians need new members to tackle their deadliest threats yet. One of Marvel’s premiere cosmic crusaders, Wendell Vaughn the original Quasar, makes his long-awaited return to answer the call. But what could possibly cause the maniacal Doctor Doom to join their ranks? With spectacular art by Juan Frigeri (Ghost Rider), mastermind Al Ewing is ready to boldly take the Guardians where no Guardian has gone before! Get on board, True Believer – it’s going to be the ride of your life!

For Earth, there are the Avengers. For everywhere else, there’s… THE GUARDIANS OF THE GALAXY. Check out the connecting covers for GUARDIANS OF THE GALAXY #13-15 below and don’t miss the start of the team’s game-changing new era this April! For more information including a first look at interior art, visit Marvel.com.

In this article:Guardians of the Galaxy, GuardiansoftheGalaxy, Marvel, Marvel Comics, MarvelComics