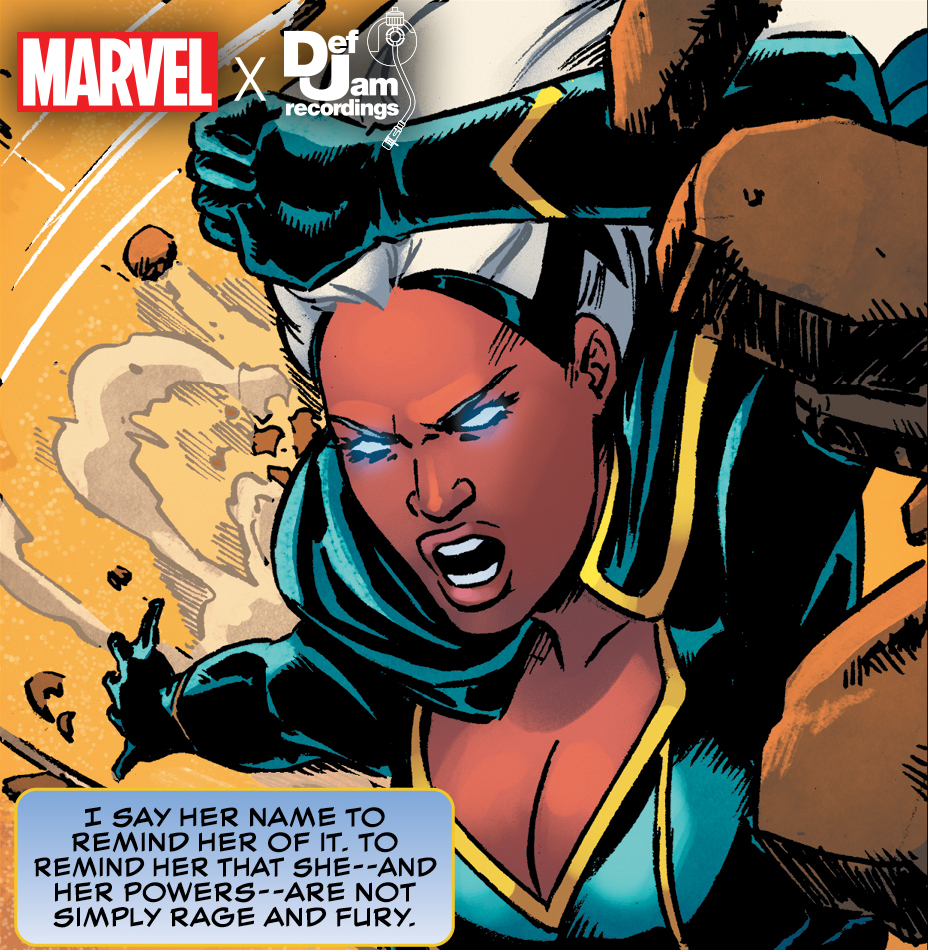 Marvel announced a very interesting collaboration today, revealing that they are teaming with Def Jam Recordings for three short stories by Def Jam artists to be featured in upcoming Black Panther comics. Starting with Black Panther #23, Saint Bodhi, Bobby Sessions and Kaash Paige will each be writing a short story on one of the most popular Black characters in the Marvel comics universe.

First, Saint Bodhi will write a Storm centered story for Black Panther #23. Next, Bobby Sessions will present a story about Black Panther for issue #24. Finally, in Black Panther #25, Kaash Paige will contribute with a story on Shuri.

Contrary to popular opinion, there’s a significant overlap between fans of rap and hip-hop and fans of comics, so this collaboration makes a lot of sense. This announcement reminds me of the very popular and unique hip-hop variant covers that Marvel and Universal Music put out a few years ago.

New York, NY— February 17, 2021 — Def Jam Recordings and Marvel Comics – two iconic brands who have left an indelible stamp on popular culture the world over – today announce a special collaboration designed to integrate the voices of young Black creatives with one of the most transformative characters and storylines in graphic arts history: Black Panther. Three of Def Jam’s rising stars – Saint Bodhi, Bobby Sessions, and Kaash Paige – will each contribute character-driven short stories in Black Panther #23, #24, and #25, the last three issues of the “Intergalactic Empire” saga from the acclaimed creative team featuring writer Ta-Nehisi Coates and artist Daniel Acuna.

In celebration of Black History Month, arriving February 24th, Black Panther #23 will see buzzing South-Central-LA singer/songwriter Saint Bodhi share her take on Storm for an emotional story grounded in tragedy and acceptance.  One month later in issue #24, Dallas-native, revolutionary rapper Bobby Sessions will tell a story about the King of Wakanda Black Panther himself.  And in the series finale issue #25 in April, “Toxic R&B” breakout star Kaash Paige will forge a tale about Wakandan Princess Shuri and the power of knowledge. Aligned with the Def Jam Forward initiative to promote social, economic, and educational equality, each three-page story will also feature an exclusive one-page Def Jam artist profile.

“Bringing these two logos together was a dream,” said Def Jam partnerships consultant Jonathan Rheingold. “There was a mutual desire to unite these two great brands for a mission and a cause — leveraging Def Jam’s rising stars and the legendary Marvel characters to tell powerful stories that would make an emotional connection with fans of both cultures.”

Bodhi, Sessions and Paige are stepping into comics for the first time within these highly anticipated issues, but each of the Def Jam artists have a long-standing passion for Marvel and the world of comics and graphic arts in general. And like the inspirations behind their latest albums, the challenges faced by Marvel’s heroes are not so far removed from their own. “My album Mad World is a raw, honest, and very personal journey into my life and upbringing in South Central L.A.,” Saint Bodhi writes. “I grew up with a not-so-normal past.  I say the things people are afraid to say. I let you experience the ‘mad world’ that is my life.”

Similarly, “Teenage Fever is my debut album and it was important for me to capture my last year of being a teen through my music,” says 20-year old Kaash. “This chapter of my life is coming to an end so I wanted to put all my experiences into a document that will live forever.”

“My album Manifest is a guide for people to transform into the greatest version of themselves,” Sessions concludes.  “A body of work that will lead people to find their inner super hero!”

Bodhi, Sessions, and Paige will bring their short stories to life alongside some of Marvel’s most talented comic book writers and artists. Kicking off with her Storm story in Black Panther #23, Bodhi will be joined by co-writer Danny Lore, artist Alitha Martinez, and colorist Rachelle Rosenberg. Don’t miss this iconic new issue of Black Panther and Bodhi’s Marvel Comics debut, on stands in comic shops everywhere February 24th! As a bonus, Bodhi’s debut story will also be included in Marvel’s Voices: Legacy #1, a celebration of Black voices and artists, on sale the same day.

Over the next week, fans can tune in to Marvel’s podcasts on SiriusXM including This Week in Marvel, Women of Marvel, and Marvel’s Pull List to hear from these artists making their Marvel debuts. More information about Sessions and Paige’s stories will be released in the coming weeks.

Def Jam Forward is a task force committed to fostering a community that values, promotes and demands respect, freedom, equal opportunity and justice for Black lives.

Our goal is social, economic and educational equality for every Black person in our community, starting with our own artists, staff and colleagues. Our commitment to equality means we will examine and amend our internal practices, as well as support organizations on the frontlines of the fight for change.

As a company, we are uniquely positioned to be a thought leader within the music industry and the world at large. As members of this task force, and ambassadors of its message, it is imperative that we embody and implement a roadmap to lasting and meaningful change.