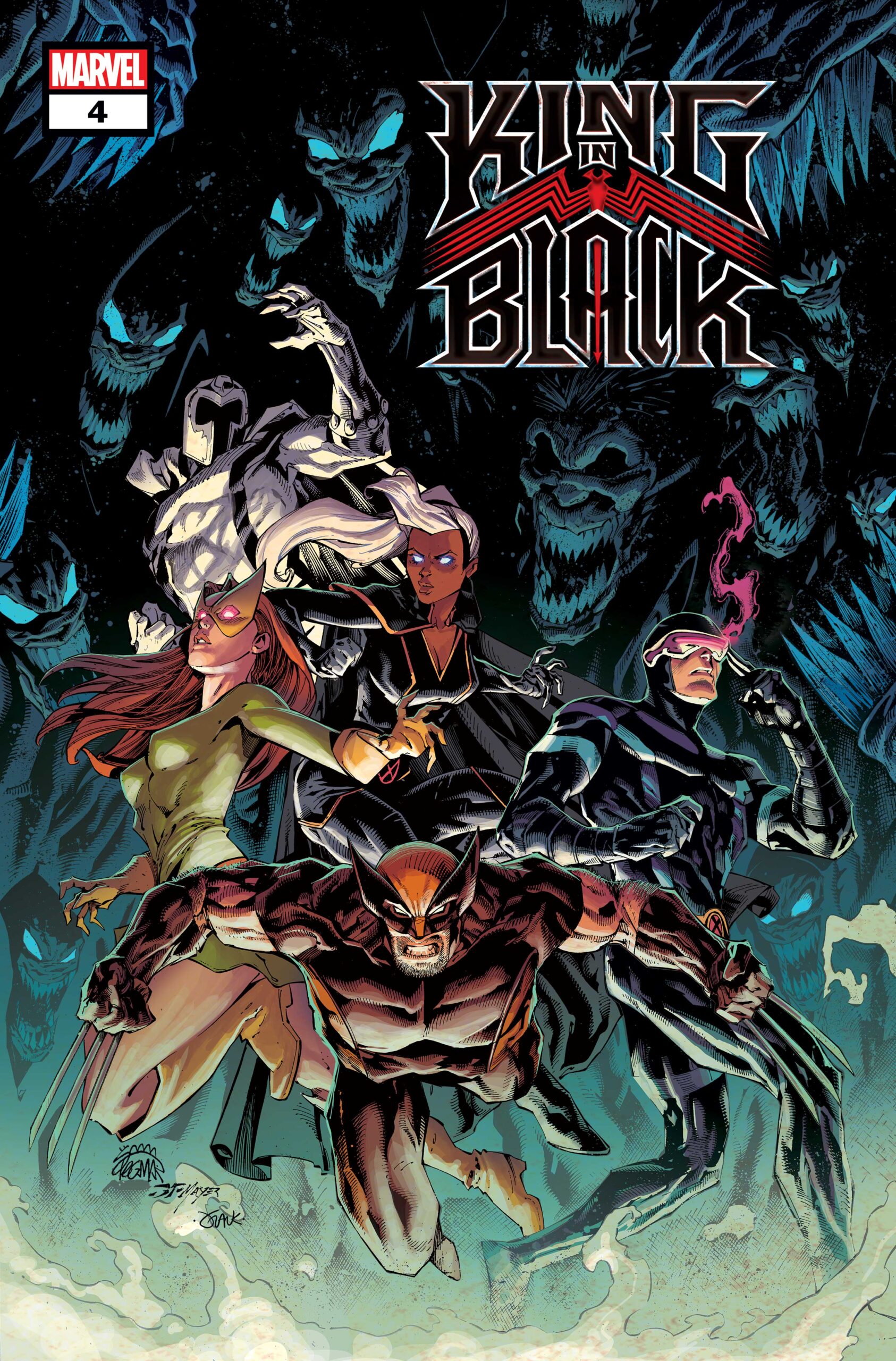 The King in Black is coming! The upcoming epic Marvel event starts December 2nd with King in Black #1 by Donny Cates and Ryan Stegman that is sure to impact all corners of the Marvel Comics Universe.

Marvel just revealed the cover for King in Black #4, releasing in February 2021 (if we ever get there!) by Stegman, and it’s a really gorgeous cover that features the X-Men surrounded by Knull’s forces, giving off an Aliens like horror vibe.

Also announced for February are a variety of one-shot comics for Captain America, Marauders and Black Panther, as well as a Fantastic Four tie-in. I’m particularly excited about King in Black: Black Panther #1 written by Geoffrey Thorne with art by German Peralta. That cover by Leinil Francis Yu is exceptional too!

Check out the gallery of covers for those one-shot and tie-in comics, as well as additional details below!

KNULL’S DARKNESS OVERTAKES THE X-MEN IN KING IN BLACK #4!

New York, NY— November 9, 2020 — The war against Knull erupts on December 2nd in KING IN BLACK #1, the shocking new chapter in Donny Cates and Ryan Stegman’s game-changing run on Venom. In February, Knull’s influence continues to spread, ensnaring the entire planet in the darkness of his reign. Outgunned and outmanned, the heroes of the Marvel Universe will unite like never before. Will the combined force of Eddie Brock, the Avengers, the X-Men, the Fantastic Four, and more be enough to turn the tide of this devastating conflict? Find out in February’s KING IN BLACK #4 as well as newly announced King in Black one-shots and tie-ins coming your way!

Steve Rogers is joined by Winter Soldier and Falcon in a brutal brawl against Knull’s forces in the streets of New York City in writer Danny Lore and artist Mirko Colak’s KING IN BLACK: CAPTAIN AMERICA. Kate Pryde leads the Marauders in a dangerous rescue mission on the high seas in writer Gerry Duggan and artist Luke Ross’ KING IN BLACK: MARAUDERS! Wakanda will need its king more than ever when Knull sets his sights on it in KING IN BLACK: BLACK PANTHER by writer Geoffrey Thorne and artist Germán Peralta. The Fantastic Four and the Unseen (AKA Nick Fury) enter the fray in FANTASTIC FOUR #29 by writer Dan Slott and artist Ze Carlos.

“The King in Black is very much an all-hands on deck, end of the world, omega-level threat. It’s going to bring together some allies that will have to put aside some ancient beefs and problems in order to come together,” Donny Cates told Comic Book Resources in a recent interview. “I can’t wait for everybody to read issue #1 and see just how front and center Krakoa is! I have to give enormous props to Jonathan Hickman and the entire team. I also have to give them to Dan Slott, Jason, Aaron, and Gerry Duggan who kind of pulled double duty with his work on the X-Titles and the other books he writes. Also to Chip Zdarsky, and really everyone at Marvel.”

Check out the cover of KING IN BLACK #4 below and find out if the Marvel Universe has what it takes to repel Knull’s unrelenting darkness when the event kicks off next month! For more information, visit Marvel.com.

WHAT’S A GOD TO A KING?
KING IN BLACK: CAPTAIN AMERICA #1
Written by DANNY LORE
Art by MIRKO COLAK
Cover by SALVADOR LARROCA
Captain America is in a brutal battle to win the streets of Manhattan back from Knull’s forces, aided by the Winter Soldier and the Falcon…but there’s a darkness inside Steve that he’s struggling to shake. Can his closest friends help him through, or will he succumb to the shadows? Danny Lore (IRONHEART 2020) and Mirko Colak (DEADPOOL, PUNISHER) join forces for a twisted and terrifying story at the heart of the war against Knull!

KING IN BLACK: MARAUDERS #1
Written by GERRY DUGGAN
Art by LUKE ROSS
Cover by RUSSELL DAUTERMAN
THE QUEEN IN RED SAILS!
Red Queen Kate Pryde and her crew of Marauders set sail against the forces of Knull! Captain Kate has pledged to fight for the needy, and a global disaster like this one gives plenty of folks in need.

KING IN BLACK: BLACK PANTHER #1
Written by GEOFFREY THORNE
Art by GERMÁN PERALTA
Cover by LEINIL FRANCIS YU
SYMBIOTES INVADE THE UNCONQUERABLE COUNTRY OF WAKANDA!
T’Challa’s most treasured allies are lost in a storm of Knull’s making in this wild one-shot! Critically acclaimed writer, actor and producer Geoffrey Thorne explores a Wakanda gone dark — invaded by Knull’s massive symbiote army. Wakanda needs its king. It needs the Black Panther. But once again, the hero must choose between his role as an Avenger, his role as a king…and the yearnings of his heart.

FANTASTIC FOUR #29
Written by DAN SLOTT
Art by ZE CARLOS
Cover by MARK BROOKS
“BONDING TIME.”
In the middle of the chaos that is KING IN BLACK…a symbiote bonds with a member of Marvel’s First Family! Also in this issue, the Unseen is putting together a squadron for a secret mission in deep space.

Kate Bishop is one of my all-time favourite characters from Marvel. Ever since I read Matt Fraction and David Aja’s Hawkeye series back in...

Marvel Studios returns to Disney+ just in time for the holidays with its latest series, Hawkeye, starring Hailee Steinfeld and Jeremy Renner. The series...

The Marvel universe continues to expand into the animated world with its second animated series on Hulu, Hit-Monkey. Following the more mature themed M.O.D.O.K.,...

Marvel Studios’ Eternals is the most diverse superhero cast ever and the first MCU film to be directed by a woman of color in...