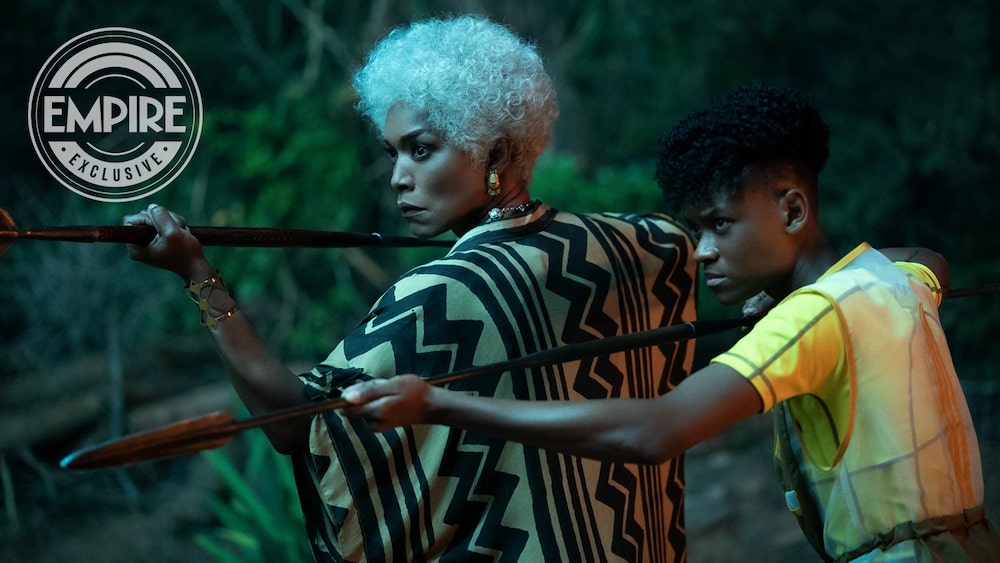 When Empire Magazine releases a new issue with a blockbuster film on the cover, you know the marketing campaign is about to ramp up. A few days ago, the respected film magazine revealed two beautiful new covers for Marvel Studios’ Black Panther: Wakanda Forever. The standard cover features Shuri (Letitia Wright), Queen Ramonda (Angela Bassett) and Namor (Tenoch Huerta) on the cover, with bold pink and purple hughes enveloping the trio for a look that really pops. The subscriber cover takes a more artistic approach, with Black Panther and Wakanda Forever production designer Hannah Beachler providing a collage design of Namor’s headdress.

In addition to the covers, Empire has been slowly revealing some exclusive images from the film. There are three primary images – one with Queen Ramonda and Shuri with spears raised, one of Shuri in ceremonial or potentially battle wear, and one of Tenoch Huerta’s Namor walking out of water.

Each of the images provide alluring teases into the film’s plot and details that the teaser trailer didn’t provide. Additional images from the magazine have also been shared online, which include both stills from the film and a behind-the-scenes shot of the actors who make up the fearsome Dora Milaje.

Every single additional look we get of this film looks incredible and only heightens the already fever-pitch anticipation for its release. It’s amazing that there is still over six weeks until the film’s release. It’s clear that with the early marketing that Marvel Studios and its partners know that this is the biggest film of the. year.

Check out all the amazing images below. Black Panther: Wakanda Forever premieres in theaters November 11th!

In Marvel Studios’ “Black Panther: Wakanda Forever,” Queen Ramonda (Angela Bassett), Shuri (Letitia Wright), M’Baku (Winston Duke), Okoye (Danai Gurira) and the Dora Milaje (including Florence Kasumba), fight to protect their nation from intervening world powers in the wake of King T’Challa’s death. As the Wakandans strive to embrace their next chapter, the heroes must band together with the help of War Dog Nakia (Lupita Nyong’o) and Everett Ross (Martin Freeman) and forge a new path for the kingdom of Wakanda.Introducing Tenoch Huerta as Namor, king of a hidden undersea nation, the film also stars Dominique Thorne, Michaela Coel, Mabel Cadena and Alex Livanalli.