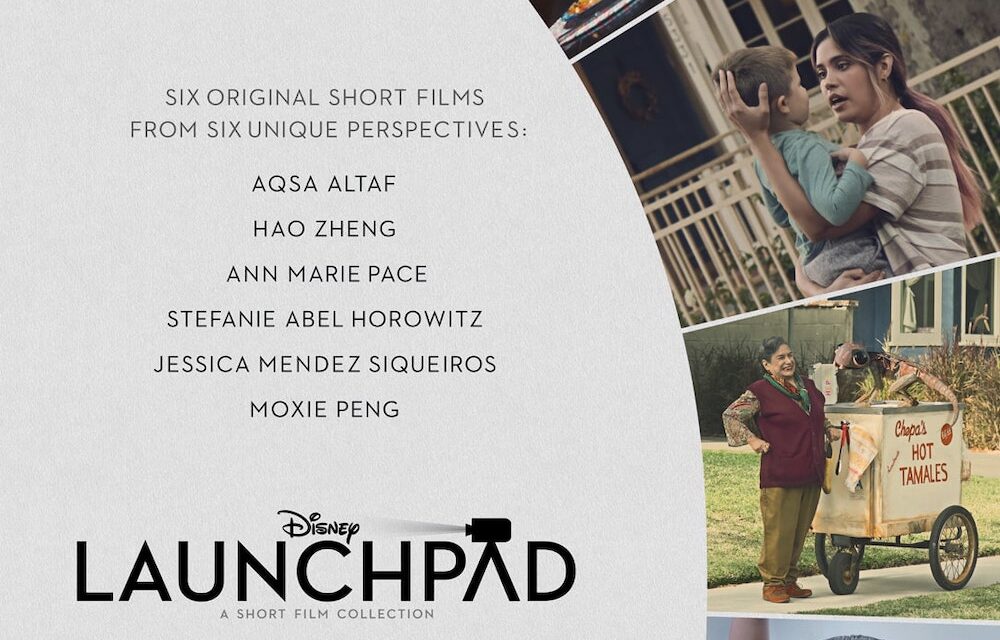 Disney’s Launchpad short film incubator programs answers the call for more diverse stories and more opportunities for diverse creatives. Disney created Launchpad to give filmmakers from underrepresented backgrounds the opportunity to tell their authentic stories with the unique level of support, resources, and platform that only Disney could provide.

Six filmmakers were selected from over 1,100 applicants from all over the country to create diverse short films based on the theme “Discover.” As part of the program, the filmmakers were matched with executive mentors from various branches of the Disney family, including Marvel Studios, Pixar, and Walt Disney Studios Motion Pictures.

The result is a beautiful and inspiring collection of films that truly live up to the ideals of representation, community and diversity in storytelling.

The six films that make up Launchpad’s first season are as follows:

American Eid – Ameena, a Muslim Pakistani immigrant, wakes up on Eid to find out that she has to go to school. Homesick and heartbroken, she goes on a mission to make Eid a public school holiday, and in the process, reconnects with her older sister, and embraces her new home, whil her new home embraces her.

Dinner is Served – A Chinese student at an elite U.S. boarding school realizes excellence is not enough when he tries out for a leadership position no international student has ever applied for.

Growing Fangs – Val Garcia, a Mexican-American teen who is half human/half vampire, has had to keep her identity a secret from both worlds. But when her human best friend shows up at her monster-infested school, she has to confront her truth, her identity, and herself.

Last of the Chupacabras – In a world where culture has nearly ceased to exist, one lone Mexican-American struggling to carry on her traditions unknowingly summons a dark and ancient creature to protect her.

Let’s Be Tigers – Avalon’s not ready to process the loss of her mother, but when she’s put in charge of a 4-year-old for one night, she finds more comfort than she ever could have expected.

The Little Prince(ss) – When Gabriel, a 7-year-old Chinese kid who loves ballet, becomes friends with Rob, another Chinese kid from school, Rob’s dad gets suspicious about Gabriel’s feminine behavior and decides to intervene.

Recently, I had the opportunity to attend the virtual press conference with each of the filmmakers, Disney’s Director of Diversity and Inclusion, Mahin Ibrahim, and the Senior Manager of Launchpad, Phillip Domfeh. The event was moderated by Variety’s Angelique Jackson.

What was apparent from each of the filmmakers was that their films were very much inspired by their deeply personal experiences.

Jessica Mendez Siqueiros, who directed Last of the Chupacabras, mentioned that her film was inspired by her grandmother, who lived to be 100 years old. “My family has always been very, very proudly Mexican, very proudly Mexican American family, and have always been indigenous to the land that we were from in Arizona originally,” Siqueiros said. “I realized after she died, after I had 25 years on this Earth with her, that I didn’t gather the information that I should have from her. That left me feeling like a bit of a failure to my own culture and really realizing that the responsibility is on us to keep our cultures alive.”

Let’s Be Tigers director Stefanie Abel Horowitz was also inspired by a grandparent. Her grandfather also lived to see his 100th birthday, which coincided with several other milestone birthdays around Horowitz. “At the time that I was writing it, my ‘zany,’ my grandpa, was going to be 100 just like Jessica’s grandma. My parents were going to be 70, and my nephew was going to be four,” Horowitz said. “I was just thinking about this passing of the baton of life that was happening.”

The ideas of death and loss play a central role in the story of Let’s Be Tigers, and while the topic can seem sad, Horowitz’s focus was on the way that death can bring people together. “It’s like a reminder to me and anyone else, that very brave act of sharing your sadness, or your pain, or your feelings of being unwanted or unloved or unheard, that that is really something that creates community, that creates togetherness, that can remind you that you’re not alone in those difficult moments,” Horowitz said.

Two distinctly Chinese films, Dinner is Served and The Little Prince(ess), tell the actual lived experiences of their respective directors, Hao Zheng and Moxie Peng. “It’s pretty much based on my own experience when I first came to the States. I was 15 back then. I went to a high school in New York, and I just felt like nobody knew me when I first landed,” Zheng said.

While attending school, Zheng found it challenging to adjust, and faced some awkward situations. He soon learned the value of embracing awkwardness. “That’s the story that I wanted to also share with Dinner is Served, like how we embrace our own voice, even though it may be awkward, even though maybe nobody will understand,” Zheng said.

For Moxie Peng, their story is a retelling of a painful childhood experience in China when a friend’s father came to their house to tell their parents that they were not “normal” because of their affinity for pink and princesses. “That event really resonated with me because it was the first time I really discovered that the world can be unfriendly,” Peng said. “I also discovered that there will be people who will accept you for who you are.”

Even the process of filming The Little Prince(ss) turned out to be a healing experience for Peng, thanks in part to their seven-year-old star, Kalo Moss. “He said he was very sorry that there’s mean people like that guy. Then he said that he hopes that I learned to move on and to find people who love me. He’s only seven and the fact that he told me this and he was understanding the story is a healing process for me, it was really amazing,” Peng said.

Mexican-American filmmaker Ann Marie Pace, who directed Growing Fangs, also understands the challenges that come with the process of finding one’s identity. “My story in and of itself is about being multifaceted in your identity, and she’s struggling with [being] half human and half vampire. It’s something I grew up with being Mexican-American and bisexual and coming from these different identities and having my foot in either world and trying to figure out what that meant and what my identity was amongst that,” Pace said. “I think something I had to learn later in life was that being a part of multiple identities doesn’t make you any less of that identity, but it all compounds and makes you fully who you are.”

Aqsa Altaf, who is Muslim and was raised in Kuwait, shared that her film, American Eid, is necessary because stories about Muslim people and traditions in the United States are rife with negative stereotypes.

This created such a big ceiling by the Western world over us that it was like, I think it was camped up and we were like, “If we don’t do it, who will? If we don’t start cracking that ceiling that was created for us one story at a time who will?” It’s not going to be one story that’s going to be enough to crack that ceiling, but it’s a crack, and one crack will build another crack, will build another crack, and eventually, will just have more of a nuanced, dimensional, proper representation of my religion culture on screen, hopefully.

Aqsa Altaf on Muslim Stories in the United States

With season one set to premiere, Disney is already in the process of preparing for a second season. For season two, the incubator program is open to writers in addition to directors, and applications are open now until June 11th.

If season one is any indication, Disney’s Launchpad is a truly special program. As Growing Fangs director Ann Marie Pace described so eloquently, “I think when you have people tell their own stories, not just the director, but actors and crew members, everyone really telling their own stories, something really beautiful happens and you feel that passion and love and life experience through the screen.”