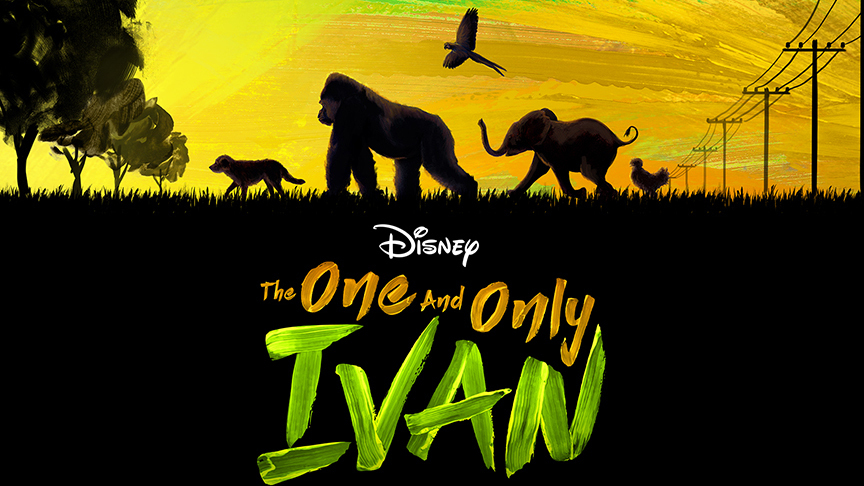 Editor’s Note: Guest contributor Michael Lee is back! This time he gives us an inside look at the upcoming Disney+ film The One and Only Ivan. Directed by Thea Shamrock and written by Mike White, The One and Only Ivan is based on the book of the same name by K.A. Applegate, Michael had the opportunity to attend the virtual press conference for the film and shares his take aways below.

The One and Only Ivan premieres on Disney+ this Friday, August 21st!

It’s not at all surprising to see how the current pandemic can parallel a film like The One and Only Ivan. The real-life isolation we are all feeling can mirror that of an animal being in a cage. Both have this profound desire to be free from their enclosures. This is something all of us are feeling. But what’s important is how we gain from this experience, and what we do with it once we can go out freely.

The One and Only Ivan centers on the titular silverback gorilla (Sam Rockwell), who lives in a cage at the Exit 8 Big Top Mall and Video Arcade with an aging elephant named Stella (Angelina Jolie), and a menagerie of other animals. When their loving owner Mack (Bryan Cranston), the owner of the Big Top Mall, falls into debt, he is forced to have his captive animals do painful and humiliating circus acts. When an abused baby elephant named Ruby (Brooklyn Prince) shows up and is taken under Stella’s trunk, Ivan starts to care for her as well, and along with George (Ramon Rodriguez) and his daughter Julia (Ariana Greenblatt), they help to turn things around at the mall.

I was invited to attend the virtual press conference for The One and Only Ivan. While many of the film’s stars spoke about what they are doing during these difficult times and how it can mirror the themes of the film, Rodriguez provided an insightful answer about how the isolation affects everybody and how we can come out of it as better people when it is all over.

“I feel like being indoors, I think it’s a lot for introspection, right? Which I think is really similar to what Ivan goes through in this coming of age experience. I love the message that you get to find yourself even later in life. We are continually on this journey, and here we are in this very interesting time where you get to be home, and whether you’re baking bread, cooking, I am almost like a bot in this house. I can plant and do all these things, but also looking within what is going on whether it is with yourself, this country, it is just a really interesting time. I think these moments actually allow us to hopefully come out of it more evolved and thrive. I think that is a particularly powerful message given where we are right now.”

Not only does The Only and Only Ivan feature human characters, it also features a diverse voice cast. However, it may be difficult to see that when the talent is voicing an animal. In the film, they get to be their authentic selves in these performances through the dialect and phonology. For Chaka Khan, she got to voice her true self in Henrietta.

Essence also played a role in the development of the film. Based on K. A. Applegate’s children’s novel, The One and Only Ivan producer and co-star Angelina Jolie found out about the book through one of her children. And as a producer of the film, she got involved by looking at some of the early drafts, which she described as a more straightforward “light, fun, kid’s car-like action” story. “It was easy for somebody to come in and just try to pick a few threads and make it quite simple and add some action here and-and to really make it what it is intended to be,” Jolie said.

But in reality, the film is anything but simple. In fact, there are some real-world themes in it that could spark some discussion after one watch. “It’s not a light film. It deals with heavy issues. But it is charming and fun and full of life,” Jolie added. “So, I thought very, very important and, wanted to get involved. I like the messages in it. I’m excited for this young generation, as well. I think all of us older people will appreciate it for many reasons.”

The One and Only Ivan will stream exclusively on Disney+ on August 21, 2020.

In this article:Disney, Disney Plus, Disney Studios, DisneyPlus, DisneyStudios, Ivan, The One and Only Ivan, TheOneandOnlyIvan