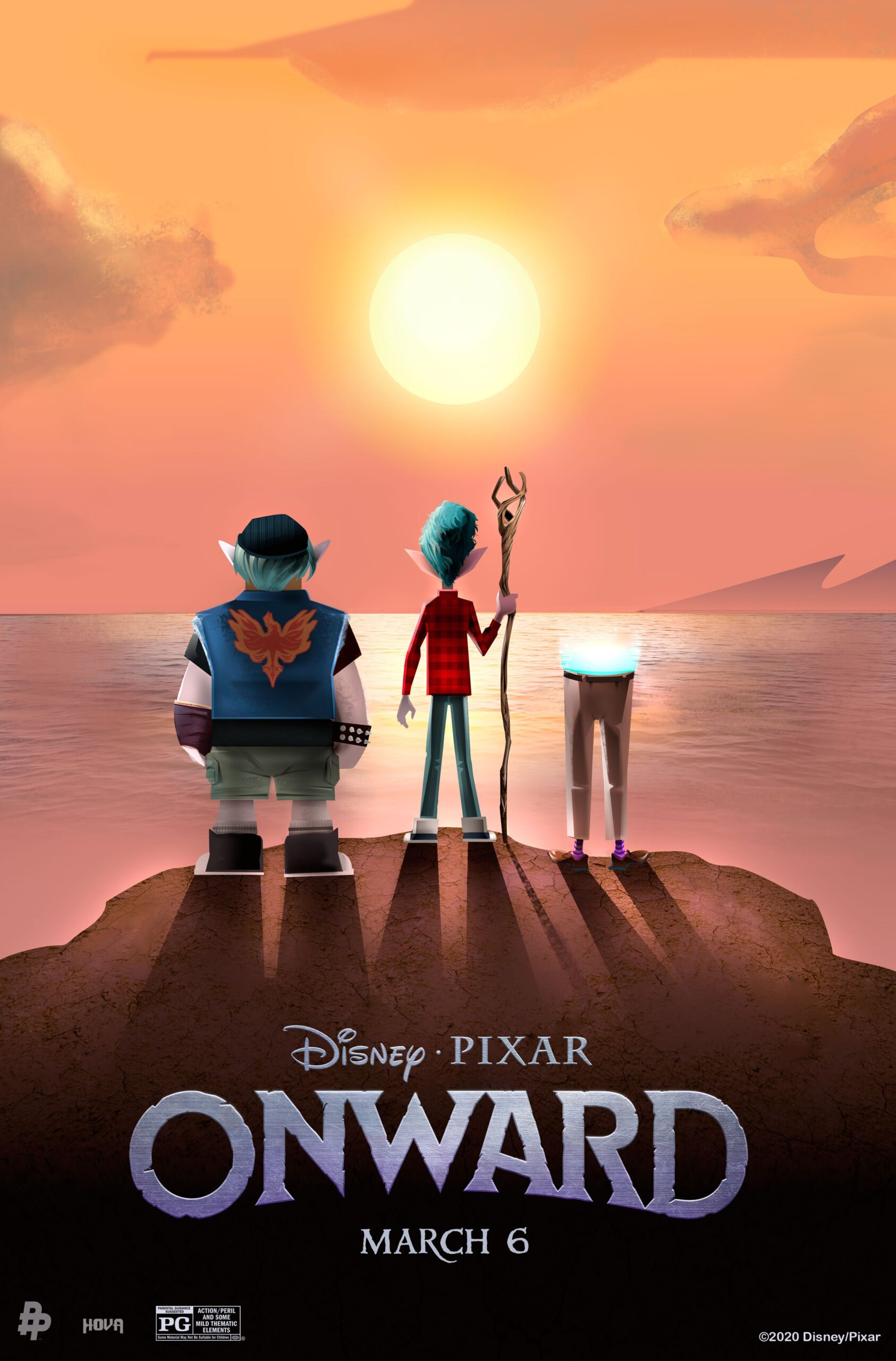 Disney Pixar’s latest film, Onward, starring Tom Holland, Chris Pratt, Octagia Spencer and Julia Louis-Dreyfus, is out in theaters today. Guest contributor Micheal Lee had the opportunity to attend the Onward press-conference a few weeks ago and learn about the the inspiration, themes and making of the film about brothers on a quest to reclaim magic in order to see their father one more time. Below are the top five things Michael learned about the film.

For over 20 years, Pixar has brought us the most thoroughly entertain movies through their colorful animation, heartfelt storytelling, and unforgettable characters. That legacy continues on with Onward, the animation studio’s first leap into the fantasy genre. Though this fantastical work is full of mythical creatures like centaurs, elves, and pixies, the heart of the film is a very human story that will resonate with many audiences who have lost a loved one and would like to spend one more day with them.

Onward features the voice cast of Tom Holland and Chris Pratt as Ian and Barley Lightfoot, respectively. The two brothers receive a wizard’s staff as a prearranged gift from their late father, who died before Ian was born and when Barley was too young to remember. While the spell doesn’t work at all for Barley, Ian’s attempt only brings back a pair of their father’s legs. With only 24 hours left before the spell wears off, the two brothers embark on a great quest to find the necessary components to finish the spell before time runs out.

Onward is inspired by director Dan Scanlon’s own story of he and his brother not knowing who their father was because he died when both of them were too young to remember him. Scanlon started developing the story six years ago, and through constant rewrites and perfecting the animation, Pixar’s latest animated film is set to hit the big screen this weekend.

I had the chance to join fellow bloggers at the official press conference, where the Holland and Pratt, along with Scanlon and producer Kori Rae, talked about the film, its underlying message, and more. Here are the top five things we learned from it.

Magic plays a huge role in Onward, as the brothers’ quest to rediscover it is critical to bringing back their father for a day. It may be a love letter to the fantasy genre, but the film could have been much different. Scanlon said there was a point where Onward was almost about two scientist brothers who create a formula that brought their father back, partially.

“We needed a way that this father could come back to life. That was really the reason behind the magic,” Scanlon said. “We could have done a version, and even considered one, where the boys were scientists who built a machine that brought dad back. But magic felt more romanticized.”

The idea to make the fantastical world set in suburbia where magic is outdated would prove to be important for Ian’s character development. “We didn’t want to set it in an old-timey fantasy world because it is a very modern story, and if these boys had been in robes, and their father was in a robe, it would have been ridiculous,” Scanlon said. “So, we thought, let’s do a modern one. And there is a sort of natural humor that comes out of that, and I think the world mirrors Ian in a lot of ways. The world of this movie is filled with people who have become complacent and fearful of taking risks, and they lost their potential. Ian is a kid who never lived up to his because he’s insecure and fearful. So, it is always nice when the world and the characters can kind of mirror. That and we just wanted to show dirty unicorns.”

Ian and Barley have one rare chance to be with their father for one more day. Unfortunately, the spell that Ian uses only brings back his legs, and to make matters worse, they only have 24 hours to find the necessary components to complete the spell so that they can see their father before time runs out. Oddly enough, the writing team had somewhat of a difficult time trying to decide where to cut off Ian and Barley’s father.

“You’d be amazed sitting in a story room with a group of ten or 12 people and having a very serious conversation about that for days, weeks, months. We tried it all,” Rae said. “We thought maybe just a pair of shoes. And then, there was one where the shoes, and then they would get something else that would create a little bit more, so he kinda grew over the course.”

She added, “You know, we like to do weird stuff at Pixar. The weirder it is, the more we know that people within the studio, and hopefully outside and audiences, are going to love it.”

3 – Being Mindful of Technology

There are a few messages that Onward hints at in the premise and the trailers of embarking on a quest to find out if magic exists out there. Of course, one is unable to see if that magic still exists if their face is buried in their phones. But on the flip side of that, technology can bring us these wonderful stories. It’s all about maintaining a sense of balance and being aware of the world that is around you.

“We certainly did not want to make a movie that was saying technology is bad because technology is how we make our movies. It’s magic in its own way. It was really a softer look at the ease that comes with it, the comfort that comes with it, just not giving up on taking the hard road a little,” Scanlon said. “Challenging yourself a little. As I mentioned earlier, magic is a metaphor for potential in this movie. And when you look at some of the characters in the film, they are not throwing away everything. They are just getting in touch with that challenge in that life, getting outside and trying something new.”

“I think the film is kind of a metaphor for ‘look out, the world is an amazing place,'” Holland said. “It’s a beautiful place. Experience it through your own eyes. Not through someone else’s Instagram.”

“The only way onward is to look forward. And you can’t look forward when you are looking at your phone,” Holland added. “To me, like I’ve deleted my Instagram, to Disney’s dismay, they are like, ‘how are you going to promote the movie?'”

Brotherhood is the beating heart of Onward. These two brothers love each other as any real-life brothers would. In fact, it is a bit of a reflection of Holland and Pratt’s own relationship with their own brothers; and somewhat of a contrast as well. Holland is the oldest of four, while Pratt is the youngest of his brothers. “It is really nice for us to make that switch,” Holland said. “Chris and I are already so close, before we even came on this film, it was almost as if we were playing ourselves.”

That closeness between the actors and the on-screen characters normalizes the relationship rather than create a caricature of two brothers in a contentious relationship, which is something that drew Pratt to the project. “What you see in movies is the older brother doesn’t let the younger brother hang out with him, doesn’t take him to school, says, ‘get out of here nerd’ or ‘get out of here twerp.’ It’s like that contentious brotherhood,” he said. “You see that all the time. It’s kind of a caricature of what real relationships are between brothers. But the truth is, brothers love each other. I loved that. I really like that, and I probably identify more with Ian in terms of my own relationship with my brother.”

Pratt paraphrased Boon Joon-Ho’s Academy Award-winning speech praising Martin Scorsese’s quote ‘the most personal is the most creative.’ “[T]his is so personal, so creative, so original,” Pratt said about Onward’s script.

1 – Recording Together but Separately

Though it may sound like Holland and Pratt recorded their lines together for the film, they actually recorded their respective parts separately. That is the case with many of these animated films, as many of the cast member’s schedules are different, and with the production of an animated film taking place in a span of four to five years, there are some cases where cast members can only come record lines just for a few days.

“I think there were moments where we were brought together, and I think maybe that has to do with getting a model of how our relationship would be like. How we interacted with one another and goofed around,” Pratt said. “It’s not the most conducive to creating audio tracks that will be used in the movie, so ultimately, you see something that you would like to model the behavior on, and then capture that with us separate, that was oftentimes the case, I think.”

Additionally, the script was already so tight, it offered very little room to improve. There is certainly magic that comes off that is found in the moment that does not exist on the page, and I don’t think there is a lot of that here in this because what is on the page is so magical and so protected,” Pratt said. “We didn’t colloquialize a ton, maybe a little bit. But for the most part, everything we say was written in the script. So, they isolated us to do that.”

In this article:Disney, Onward, Pixar