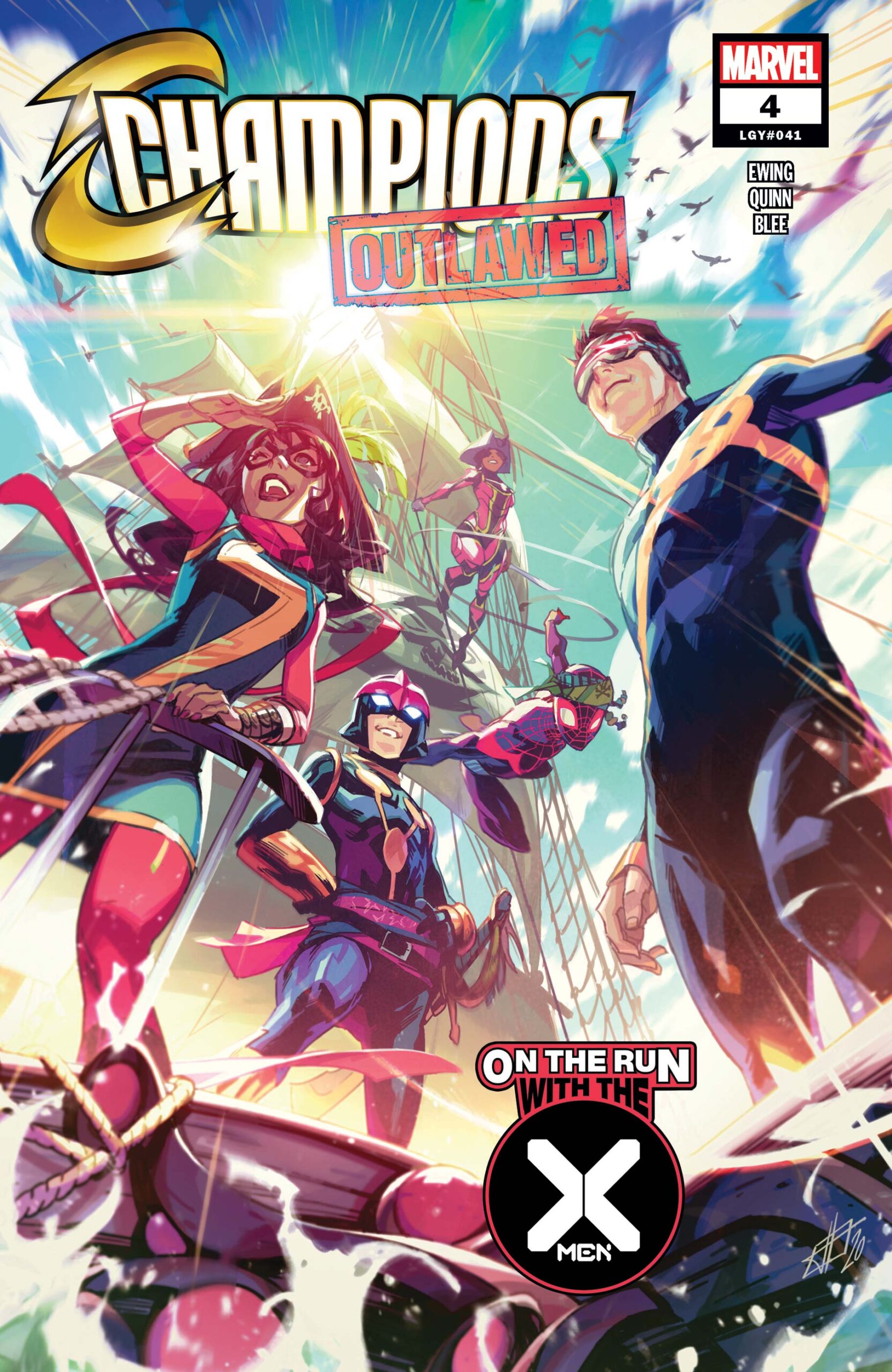 We pick up our story right where we left off with Kamala, Miles, Riri and Sam. Our heroes are saved in the nick of time by Cyclops, and the X-Men will shelter the Champions at Krakoa. The C.R.A.D.L.E. officers are so confused that they let the Champions leave with Cyclops instead of causing a diplomatic incident.

Champions #4 is available now at your local comic book shop! Spoilers below!

Writer: Eve Ewing
Penciler: Robert Quinn
Cover Artist: Antonio Infante
Guest-Starring CYCLOPS and the MARAUDERS! Avast, ye! CHAMPIONS ON THE HIGH SEAS! NOVA, IRONHEART, MILES and MS. MARVEL have narrowly escaped C.R.A.D.L.E. for now with the help of their old teammate, but it’s out of the frying pan and into the…ocean..

Our heroes have been wondering how C.R.A.D.L.E. has been catching up to them every step of the way up to now. Cyclops lets them know that Viv Vision is the informant. They believed Viv to be dead, and they are shocked to learn that she is the one ratting them out. How can their friend do this to them?

So many highs and lows for our team. We come to learn that Krakoa will not welcome them, but Cyclops will stand by his word and offer the Champions protection. They go to join the crew of the Marauder, and X-Men pirate ship! Just take a look at Toni Infante’s gorgeous cover and you can almost feel the wind blowing through your hair. We join the X-Men in a rescue mission. The Champions come to the realization that things are not as black and white as they thought, as Bishop explains they make a choice whom to help and they live with the choice.

We have a C.R.A.D.L.E. interlude as well. Seems Kamala’s Law has been successful in getting young heroes off the street. The community is split, those over 40 mostly agree with the law and there is a split with younger folks. They must get the Champions in line but they’ll need some luck as that seems like an impossible ask.

We end the issue with Viv Vision, who is conflicted that so many innocent people have been put in danger because of the actions that the Champions have taken. The lady that has taken her in shows her pictures of when she was younger at a sit-in in the 1960’s and tries to explain to Viv that sometimes you must break the rules, if those rules aren’t fair. There is strength in friendship, and the Champions are stronger together.

This issue…as I write this I’m still in tears over the last scene between Viv and her new friend! Our Champions learned so much in this issue. Things aren’t always clear cut and it is okay to not know what the “right” thing to do is, but they must always trust and believe in their friends!

I caught up with the Champions this week and I really love this story! All of our young heroes are multidimensional, and make me invested in their lives! I’m looking forward to where this story takes us next!