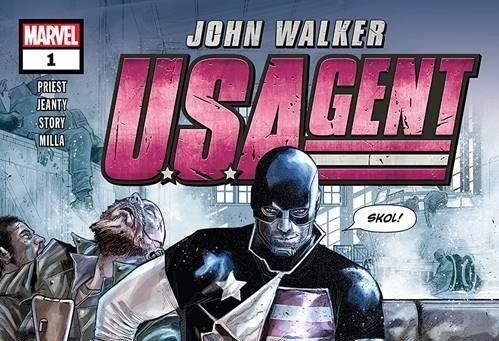 Christopher Priest is back! And so is U.S.Agent, in the form of a five issue mini-series telling a new story of John Walker. U.S.Agent #1 dropped last week, and today Marvel released a fantastic interview with writer Christopher Priest. As Priest says, John Walker is not a superhero. Through this story, Priest says that we will see “just how much strength of character, nobility and self-sacrifice it takes to actually be called a hero in the Marvel Universe.”

This book comes at a great time, because U.S.Agent is about to be introduced to a much larger audience in the upcoming Marvel Studios Disney+ series Falcon and the Winter Soldier. Get to know him now!

Check out the interview and additional information below. U.S.Agent #1 is out now!

CHRISTOPHER PRIEST EXPLORES THE COMPLEXITIES AND RELEVANCE OF U.S.AGENT IN NEW VIDEO INTERVIEW!

New York, NY— November 11, 2020 — U.S.Agent, the Super-Soldier you love to hate is back in an all-new series by writer Christopher Priest and artist George Jeanty! When John Walker is stripped of his official status as U.S.Agent, the former Super Patriot goes independent and gets caught up in a conflict between a small town and the corporate giant trying to destroy it. With a brand-new partner and a dangerous new enemy, Walker’s mission will force the unconventional “super hero” to confront hard-hitting questions about himself and the nation he serves. This journey of self-discovery will dive into the character’s past and set U.S.Agent on course for an exciting new place in the Marvel Universe.

Marvel Host Ryan Penagos recently sat down with Christopher Priest to discuss the acclaimed writer’s views on the former Captain America. Find out what makes U.S.Agent tick and check out never-before-seen art form the series in this exclusive video interview!

John Walker’s high-stakes adventure is now underway! Pick up the debut issue, on sale now, and don’t miss U.S.AGENT #2 when it hits stands on December 23rd.