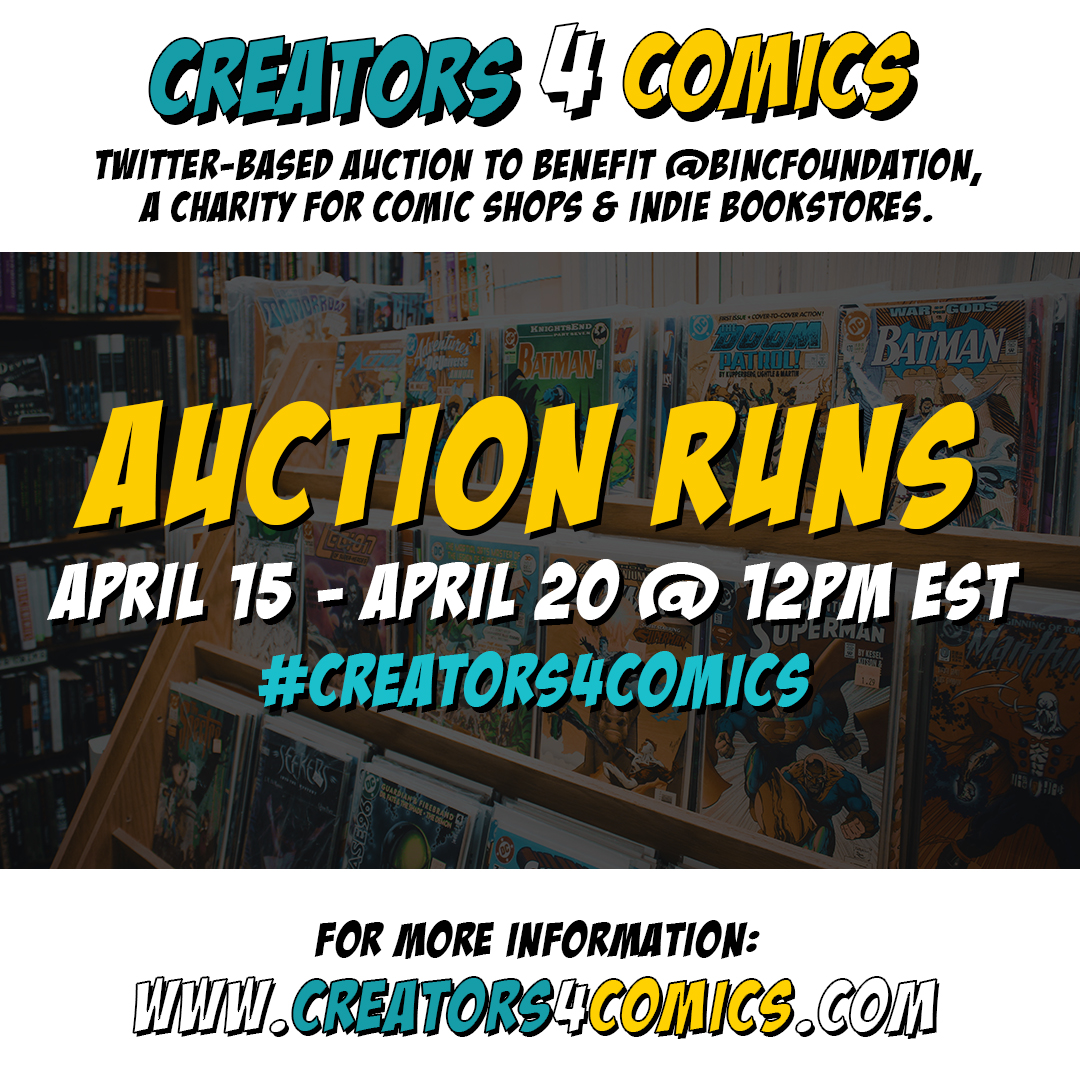 It’s no secret that this pandemic is a difficult time for many industries. Among those hardest hit are independent bookstores and comic shops, which were already facing difficulties in the midst of a rapidly changing landscape for brick and mortar stores. Comic shops were then hit with the double whammy when Diamond Comic Distributors, which oddly is responsible for nearly all major comic distribution, shut down operations in late March. Frankly, it’s a little bizarre that nobody saw a problem with having one main distribution channel for all major comics but that’s a different conversation.

On Wednesday, a collection of comic book creatives, led by Kami Garcia, Brian Michael Bendis, Gwenda Bond, Sam Humphries and Phil Jimenez, organized a large online auction initiative which encouraged creators to put together auctions with proceeds going to the Book Industry Charitable Foundation (BINC). What followed was a slew of the biggest names in comics putting up some of the most geektastic auctions we’ve ever seen. It’s pretty awesome. I love how creative these packages are and how they afford comic fans to get their hands on otherwise completely inaccessible collectibles.

Below are just a few of my favorite auctions to give you an idea of how epic these packages are. If you’re able, treat yourself to one of these incredible auctions and support comic shops that really need some superheroes right now!

I'm donating my #Avengers printers proofs as part of #Creators4Comics. 100% of proceeds will benefit @BincFoundation. You can bid on the set here: https://t.co/1g6sRJlYJx pic.twitter.com/ACqYLnhmrD

Lot 1. BIRDS OF PREY.
Includes: Comic, collection and script, signed by me!

Oh. And did I mention?

LOT THREE is an INCREDIBLE art print, it's STUNNING. It's a huge BATGIRL AND THE BIRDS OF PREY print, the highest quality, limited to 300!

It will be signed by myself, AND @TerryDodsonArt and Rachel Dodson! I can't tell you how beautiful this piece is! by @collectsideshow! pic.twitter.com/vPwphhCFed

My dear friend, Mimi Chan, who was the undefeated martial arts champion who PLAYED Mulan acting in the original animated Disney classic, and CHOREOGRAPHED the fights, agreed to donate a PERSONALIZED LESSON.
TO YOU. pic.twitter.com/SQU1aHP5MA

APPEAR IN AN ISSUE of JOKER/HARLEY: CRIMINAL SANITY * @jasonbadower & I are auctioning 3 spots. #Creators4Comics
– Reply to this tweet to bid
– 3 Highest Bidders Win a Spot
– Ends April 20, 12pm EST
– Proceeds to @BincFoundation pic.twitter.com/LFloukDpo2

On behalf of FRANK MILLER, I'm auctioning an original, one-of-a-kind Batman sketch cover, drawn by Frank himself!! (No pics yet, it's being drawn as we tweet!)

Do you love your local comic shop and indie bookstore? Me too, which is why I’m joining #Creators4Comics!

Win a signed copy of DRAGON HOOPS, a backboard, a ball, and a signed READ poster!

Opening bid $30. Enter by replying to this tweet by April 20 @ 12pm EST! pic.twitter.com/vCNUfW4trz

Auction for the RETURN OF THE HULK Vol. #1 HC – SIGNED BY STAN LEE! Includes a numbered/signed certificate of authenticity from Dynamic Forces.

BID HERE ON THIS THREAD! Highest bids get the spots!

For #Creators4Comics I am auctioning 13! signed hardcovers! + A signed rare con variant for Batman #1! + The script for Batman/Fudd! + A terrible sketch!!

Joining #Creators4Comics with @shawnabenson & auctioning off 4 SIGNED TRADES: 3 Batgirl and the Birds of Prey & 1 Green Arrow (all written by us).
• Bid by replying to this tweet!
• Opening bid: $50
• Auction ends 4/20 @ 12 PM EST
• Winner donates directly to @BincFoundation pic.twitter.com/Z5skdWtj1H

Do you remember #AAIronFist? It may not be Netflix or Marvel Studios answering the phone, but it looks like Marvel Comics is picking up...