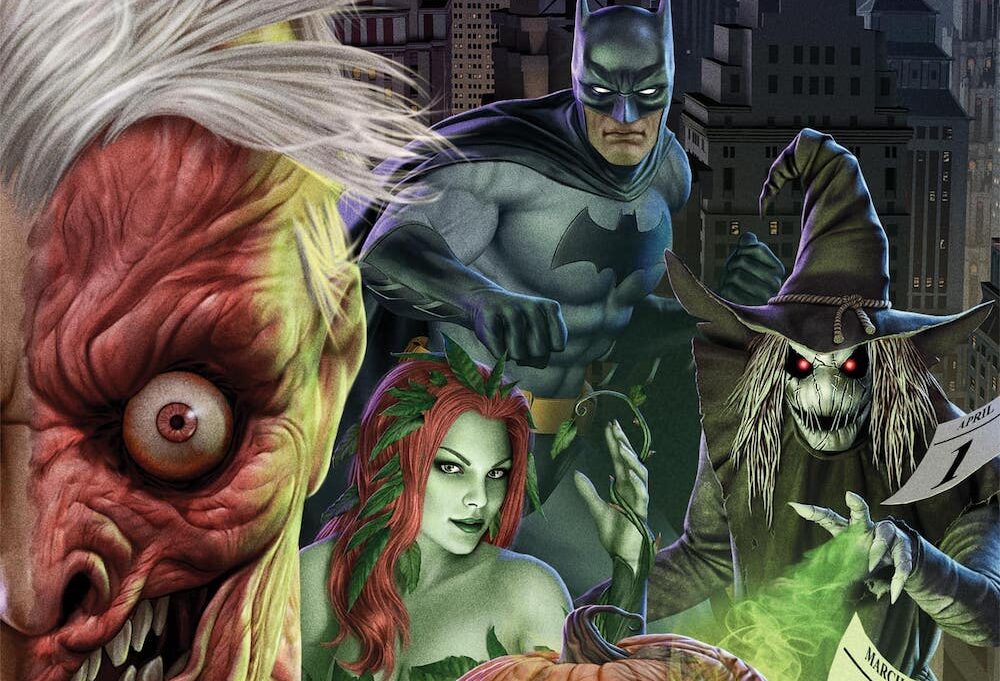 Batman: The Long Halloween by Jeph Loeb and Tim Sale is one of my favorite Batman stories of all time. Originally published in 1996, it’s almost a shock that it’s taken this long for an animated feature film to be released.

The original 13-issue comic is being split up into two parts, with part one releasing next month on June 22nd.

Today, Warner Home Video announced that Batman: The Long Halloween, Part Two will be releasing just over one month later on July 27th, and released a thrilling new trailer for the sequel film.

I can’t wait for this two part film, and if the trailers are any indication, the animated film will do the source material justice.

Check out the box art and additional details below!

BURBANK, CA (May 19, 2021) – The Dark Knight must combat a unified front of classic DC Super-Villains, diffuse an escalating mob war and solve the mystery of the Holiday Killer in Batman: The Long Halloween, Part Two, the thrilling conclusion to the two-part entry in the popular series of DC Universe Movies. Produced by Warner Bros. Animation, DC and Warner Bros. Home Entertainment, the feature-length animated film – which will be accompanied by the latest DC Showcase animated short, Blue Beetle –arrives July 27, 2021 on Digital and August 10, 2021 on Blu-ray. Batman: The Long Halloween, Part Two is rated R for some violence and bloody images.

Inspired by the iconic mid-1990s DC story from Jeph Loeb and Tim Sale, Batman: The Long Halloween, Part Two continues as theHoliday Killer is still at large and, with Bruce Wayne under the spell of the venomous Poison Ivy, Batman is nowhere to be found. Liberated by an unlikely ally, Bruce quickly uncovers the real culprit: Poison Ivy’s employer Carmine Falcone. The Roman, his ranks decimated by Holiday and his business spinning out of control, has been forced to bring on less desirable partners – Gotham City’s rogues’ gallery. In the meantime, Harvey Dent is confronting battles on two fronts: attempting to end the mob war while also dealing with a strained marriage. And, after an attack that leaves Harvey hideously disfigured, the District Attorney unleashes the duality of his psyche that he’s strived his entire life to suppress. Now, as Two-Face, Dent decides to take the law into his own hands and deliver judgment to those who’ve wronged him, his family and all of Gotham. Ultimately, the Dark Knight must put together the tragic pieces that converged to create Two-Face, the Holiday Killer, Batman and Gotham City itself.

Want to check out more animated DC Super Hero entertainment before seeing Batman: The Long Halloween, Part Two? HBO Max has a wide array of DC Universe Movies available for viewing. And you can catch up on all of the comic book source material by0 visiting DC UNIVERSE INFINITE (US-only).

Batman: The Long Halloween, Part Two will also be available on Movies Anywhere. Using the free Movies Anywhere app and website, consumers can access all their eligible movies by connecting their Movies Anywhere account with their participating digital retailer accounts.

Movies Anywhere is a digital movie platform that enables movie fans to discover, access, and watch their favorite digital movies in one place. Movies Anywhere brings together a library of nearly 7,500 digital movies from Sony Pictures, Twentieth Century Fox Film, The Walt Disney Studios (including Disney, Pixar, Marvel Studios and Lucasfilm), Universal Pictures (including DreamWorks and Illumination Entertainment) and Warner Bros., and will continue to expand the consumer experience as more content providers, digital retailers and platforms are added. By connecting participating digital retailers that include Amazon Prime Video,  the Apple TV app, FandangoNOW, Google Play and Vudu, movie fans can now bring together their digital movie collections (whether purchased or redeemed) in one place and enjoy them from the comfort of their living rooms, and across multiple devices and platforms, including Amazon Fire devices; Android devices and Android TV; Apple TV, iPhone, iPad and iPod touch; Chromecast; Roku® devices; and popular browsers. Movie fans can also redeem digital codes found in eligible Blu-ray and DVD disc packages from participating studios and enjoy them through Movies Anywhere. Movies Anywhere – your movies, together at last.

Digital movies or TV episodes allow fans to watch a digital version of their movie or TV show anywhere, on their favorite devices. Digital movies or TV episodes are included with the purchase of specially marked Blu-ray discs. With digital, consumers are able to instantly stream and download movies and TV shows to TVs, computers, tablets and smartphones through retail services. For more information on compatible devices and services, go to wb.com/digitalmoviefaq. Consult a digital retailer for details and requirements and for a list of digital-compatible devices.

Warner Bros. Home Entertainment (WBHE) brings together Warner Bros. Entertainment’s physical and digital distribution businesses in order to maximize current and next-generation distribution scenarios. An industry leader since its inception, WBHE oversees the global distribution of content through packaged goods (Blu-ray Disc™ and DVD) and digital media in the form of electronic sell-through and video-on-demand via cable, satellite, online and mobile channels. WBHE distributes its product through third party retail partners and licensees.

DC, a WarnerMedia Company, creates iconic characters, enduring stories, and immersive experiences that inspire and entertain audiences of every generation around the world and is one of the world’s largest publishers of comics and graphic novels. As a creative division, DC is charged with strategically integrating its stories and characters across film, television, consumer products, home entertainment, interactive games, DC UNIVERSE INFINITE digital subscription service and community engagement portal. For more information visit dccomics.com and dcuniverseinfinite.com.

One of the most popular Batman web comics on Webtoon is coming to live-action! Batman: Wayne Family Adventures, a web comic that puts the...