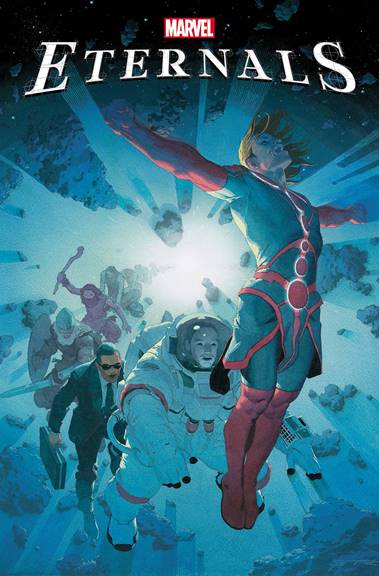 I love the trailers that Marvel Comics releases for its big projects. Marvel released a dramatic new trailer for its upcoming revamp of Jack Kirby’s Eternals, a team of demi-god like beings, coming in January 2021 by Kieron Gillen and Esad Ribić. For almost all of the trailer, Ikaris is the main focus, and there isn’t much given away in terms of story. However, in honor of its MCU cousins, the trailer has a pretty cool epilogue revealing the Mad Titan himself, Thanos!

With the Marvel Studios film coming out next year (we hope), directed by Chloe Zhao and featuring a star-studded diverse cast, there’s more interested in the Eternals than ever before. The Eternals have an uneven history in comics, with Kirby’s original run from the 70s considered to be the group’s golden age. Since then, the Eternals haven’t enjoyed the spotlight much in the Marvel Comics universe, and the group deserves a modern facelift. The new creative team of Gillen and Ribić is a great choice by Marvel and I’m eager to see where they take the book.

Eternals #1 releases January 6, 2021! Check out the trailer and additional details below!

New York, NY— November 24, 2020 — Mastermind creators Kieron Gillen (The Wicked + The Divine, Uncanny X-Men, Thor) and Esad Ribić (Secret Wars, King Thor) join forces this January to redefine one of Marvel’s most fascinating mythologies in ETERNALS #1. Readers will experience Jack Kirby’s classic creation in an epic saga that will enthrall both longtime fans of the Eternals and those experiencing these enigmatic heroes for the first time. The groundbreaking new series will reintroduce classic Eternals characters for a new age, reveal new members of the legendary group, and feature the return of one of Marvel’s most feared villains, the Mad Titan himself, Thanos. Check out a brand-new trailer for the debut issue featuring never-before-seen artwork and covers!

“The joy of Eternals for me is it’s just so much, but it’s also such a clean, accessible book in terms of, “These are people who we’re going to hang around with, they’re fun to be with, and oh my god! They’re in trouble,”’ Gillen told Comic Book Resources. “It does everything I love a Marvel book doing in terms of action, romance, and philosophy of ideas, but it’s also absolutely me coming back to Marvel with the kinds of skills I’ve honed over in indie books like Die, The Wicked & the Divine and Once and Future; that way of thinking about how to make a universe really pop.”

Learn what it truly means to be ETERNAL when the highly-anticipated debut issue hits stands on January 6th!

In this article:Eternals, Marvel, Marvel Comics, MarvelComics, The Eternals, TheEternals